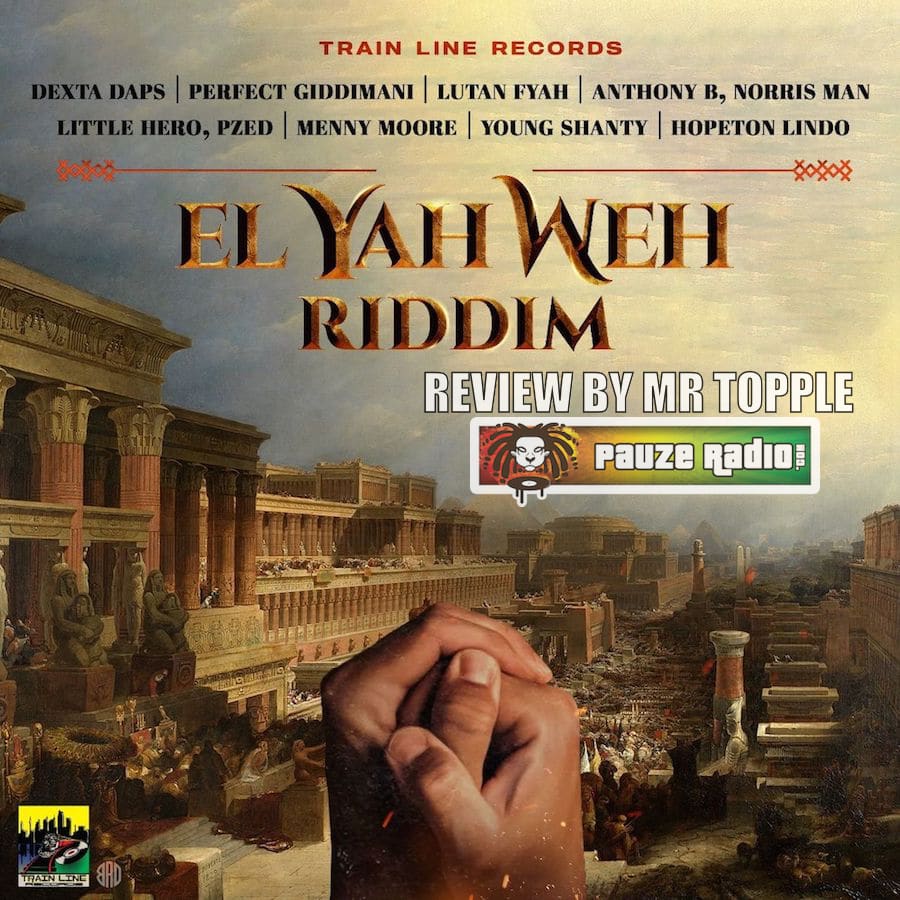 Train Line Records have just scored one of the strongest riddims of the year – with the lead track from none other than Dexta Daps.

El YahWeh, released via Train Line Records, sees the label deliver something of sheer quality that’s highly attractive. The riddim itself is soulful yet Reggae-laced – almost classic in nature. The giveaway on this is the grand opening, with its impressive, lilting piano line – filled with rapid runs and riffs.

What dominates on first listen are the chord progressions. The arrangement is predominantly in a minor key – but what Trainline has done so well is juxtapose this with occasional flits into major chords. Also, this is no standard root to minor 7th affair – instead, it has complex chord progressions especially across the breaks and bridges. It is rich, soulful, and glorious – and stands the individual instrumentation in good stead.

Reggae devices dominate across the instruments, but with some pleasing attention to detail. Keys run a bubble rhythm, in the mid-range of their register with little variation from this – setting a basic forward-motion. Drums run a one-drop where the kick and snare hit the two and four, while hi-hats fill the spaces in between with quavers. But there is more intricacy here, too – with some pointed rolls across tom-toms, cymbal crashes and occasional buzz rolls on the snares to bring something more regimental in – plus nice full-rolls at the end of each fourth bar.

The, the bass runs a drop-beat rhythm, low down its register. It has its own melody as opposed to arpeggio chords, and the rhythmic pattern is syncopated – apart from that omnipresent drop on beat three. The style is picked, creating forward motion with the keys and juxtaposing against the lazy drums. Then, Train Line have included some pleasing additional instrumentation.
There are two guitar lines at play, here. One is on a repeated skank – but interestingly, it is a triple-time one (demisemiquavers instead of quavers), focusing only on the downbeats (one and three). The other guitar does a repeated, soulful riff which hammers-home the thrust of the overall arrangement.

Overall, El YahWeh riddim is gloriously composed and executed. What’s also of note is the quality of the engineering and mastering across all tracks. Train Line are beginning to get themselves a solid reputation for releasing big label-quality records in terms of the final cut – and here is no exception. The engineering is rich and tonal, with great attention to detail across effects like reverb, dampening, use of inputs and delay. Then, the final master is sympathetic to each artist’s interpretation. For example, on Daps’ track the bass is not dominant but still present – allowing the higher kHz instruments to come through – especially the keys and the skanking guitar. The point being that Daps has a high tenor voice – and too much focus on the lower kHz instruments would distract from this. So, it is a perfect blend of all frequencies working together.

The riddim opens with the lead single from Dexta Daps – Blessings. You can read Pauzeradio’s full review of it here. Suffice to say, it is one of Daps strongest performances in recent years – showing a side to him away from the Dancehall-RnB he’s become famous for. A highly-skilled vocal performance meets moving lyrics in what is a stunning and moving piece of music.

Next, and Hopeton Lindo gives us Faith Over Fair – and here, things change course somewhat. The first stand-out is that the background vocals are far more choral than Daps’ interpretation – with plenty of call and response vocals and layered, female harmonies. Hopeton then delivers something delicate and pointed. He works in the mid-to-low range of his register, but gliding up to something higher when needed. He has a pleasing vibrato and good attention detail in term of dynamics. The melodic line is pleasing, and lyrically Lindo has woven a strong narrative that, whatever happens in life, trust in Jah will see you through. It’s potent and expressive and a solid contribution.

Special Place comes from Lutan Fyah, who is always a pleasure to listen to. Here, he is his usual, rhythmically intricate self – treading that fine line between slick vocal and pointed singjay with ease. His rhythmic arrangement is undoubtedly one of the strongest of the entire riddim – as he takes a basic musical stanza and then heavily embellishes it as the track progresses. But as always, what Fyah has also done so well is deliver an infinitely memorable chorus – as well as plenty of melodic interest, too. Lyrically, he pays homage to Jamaica and the Motherland – and overall, it’s a strong and pleasing contribution from this superb artist.

Menny More delivers his interpretation, El – and it’s a fast-paced, engaging affair. More has created a quite brilliant rhythmic arrangement – filled with dotted notation which flips and switches with good attention to detail. He swerves between his straight singjay, something more vocal and even a bit of spoken word at points. But it’s his voice which is especially pleasing. Working around a rich, resonant baritone, he dips right down into almost a bass range before going up to a low tenor. Lyrically, it’s engaging as he dissects Babylon and whether or not ‘heaven and hell’ actually exist on earth, too – and it’s a strong and attractive offering.

Norris Man x Anthony B give us House of Parlement, featured on the former’s album Deep Conversations. Norris Man and Anthony B are perfectly placed together – with the performances being engaging and forthright. And the lyrical content is timely and pertinent – about how corrupt politicians are the “biggest gangsters” that reside in the Houses of Parliament while meting-out policies that leave the rest of us in abject poverty surrounded by violence. Overall, Houses of Parlement is a strong and affecting track.

Perfect Giddimani seems continuously busy, having just released a new track himself. Here, he gives us Black Star Lina – whose opening is quite spectacular, as Giddimani delivers a vocal riff sitting between Nyabinghi chant and Doo-Wop, which is expertly executed. As he settles into his main vocal, Giddimani avoids the usual singjay-style delivery, instead opting for a straighter vocal throughout to very good effect. His voice is effortless, here – moving from his tenor to falsetto and back again. And he’s delivered a powerhouse narrative about the emancipation of the Motherland. Giddimani is a star – as this track shows.

Pzed x Little Hero join forces for Gunz In The Street. They’re a brilliant pairing, because as artists they have completely different styles – but they’re ones which marry extremely well together. Pzed’s rounded, horizontal embouchure and rich and warm tone glides across the track as he moves around his tenor, while Little Hero’s slightly more vertical style complements him perfectly, as he too works around his resonant tenor – ending up a great combination. The two have delivered a lyrical narrative about the state of the world under Babylon and all its ills, which is thought-provoking and well-constructed: “tell them to stop killing poor people” resonates – and the track is very strong.

El YahWeh closes with Young Shanty delivering Cool It Down. He has provided perhaps the most eclectic performance of the riddim, in terms of his varying vocal/singjay mix. Vocally, he has taken the mantra ‘less is more’ and run with it across the chorus, giving us something memorable in the mid-range of his register. But what’s interesting is that Shanty reverts to a singjay style on the verses, in terms of varying rhythms and less of a melodic line – but higher up his tonal register, with a breathy and delicate timbre juxtaposed against the more forthright choruses. It’s a fascinating arrangement – coupled with Shanty’s powerful lyrical content about how you can’t ‘cool the fyah down’ that burns in those of us who are spiritual and conscious. It’s a great closing to the riddim and shows Shanty at the peak of his powers.

Overall, El YahWeh riddim is quite superb: unfussy yet skilfully and beautifully constructed to make a rousing piece of music. The final engineering and mastering are top-notch. Then, each artist has brought something new to the table – with tracks from Daps, Fyah, Giddimani and Shanty being the standout ones. As a sum of its parts, El YahWeh is superb – and one of the stronger riddims of 2022. Brilliant works.