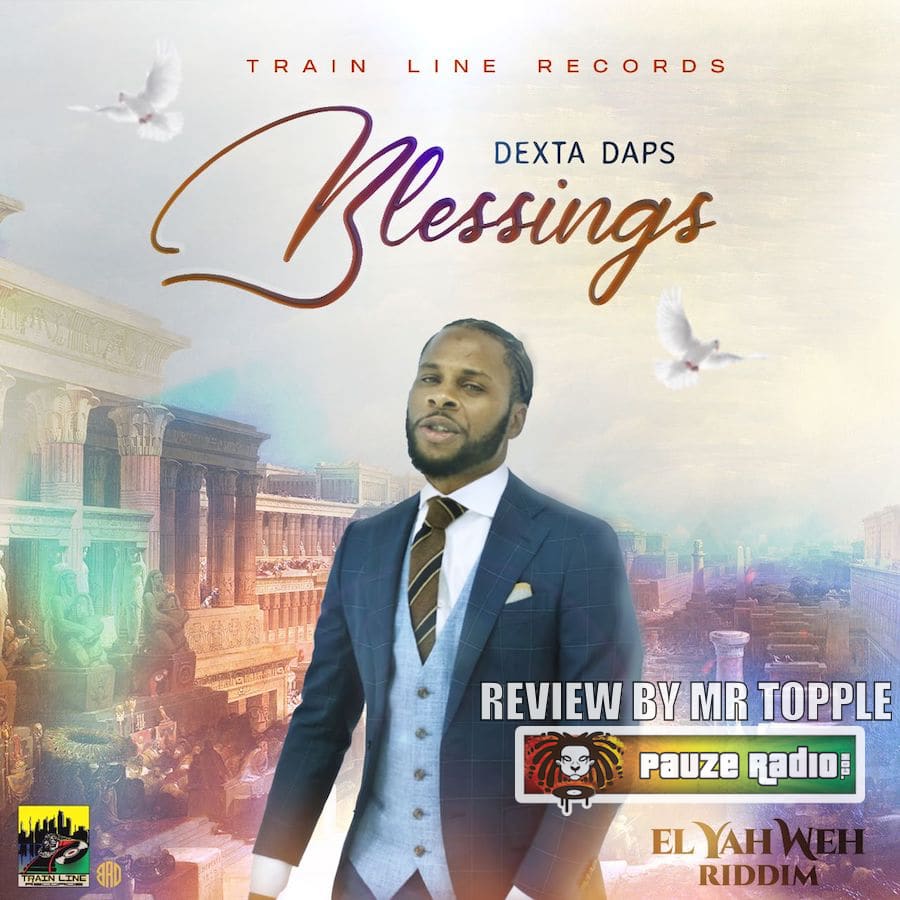 What a way to end 2022 – not only with a new Dexta Daps track, but one which sees him returning to Reggae and something more conscious as well.

Blessings, released via Trainline Records, is from the label’s El YahWeh Riddim, which is out on 18 November. It’s a strong move from Trainline to release Daps’s track as the lead (and a coup for them to get him on the riddim, too). Because the track is pure, pure perfection.

The riddim itself is soulful yet Reggae-laced – almost classic in nature. The giveaway on this is the grand opening, with its impressive, lilting piano line – filled with rapid runs and riffs.

What dominates on first listen are the chord progressions. The arrangement is predominantly in a minor key – but what Trainline has done so well is juxtapose this with occasional flits into major chords. Also, this is no standard root to minor 7th affair – instead, it has complex chord progressions especially across the breaks and bridges. It is rich, soulful, and glorious – and stands the individual instrumentation in good stead.

Reggae devices dominate across the instruments, but with some pleasing attention to detail. Keys run a bubble rhythm, in the mid-range of their register with little variation from this – setting a basic forward-motion. Drums run a one-drop where the kick and snare hit the two and four, while hi-hats fill the spaces in between with quavers. But there is more intricacy here, too – with some pointed rolls across tom-toms, cymbal crashes and occasional buzz rolls on the snares to bring something more regimental in – plus nice full-rolls at the end of each fourth bar.

The, the bass runs a drop-beat rhythm, low down its register. It has its own melody as opposed to arpeggio chords, and the rhythmic pattern is syncopated – apart from that omnipresent drop on beat three. The style is picked, creating forward motion with the keys and juxtaposing against the lazy drums. Then, Trainline have included some pleasing additional instrumentation.

There are two guitar lines at play, here. One is on a repeated skank – but interestingly, it is a triple-time one (demisemiquavers instead of quavers), focusing only on the downbeats (one and three). The other guitar does a repeated, soulful riff which hammers-home the thrust of the overall arrangement. Backing vocals, some notably from the superb Chevaughn, are extremely well-arranged, complementing Daps’s main line with multi-layered harmonies and occasional call and response duties. And the midway bridge, going back to the style of the Soul opening, is a beautiful touch.

Engineering-wise, and Trainline have provided interest throughout – including feeding Daps’s vocal through both inputs at times; rhythmic reverb which varies from crotchets to quavers that also has decay laced across it, and the separate guitar lines coming out of both inputs but with varying degrees of dB depending on the point in the track.

The mastering across the track is superb, as well. Here, the bass is not dominant but still present – allowing the higher kHz instruments to come through – especially the keys and the skanking guitar. The point being that Daps has a high tenor voice – and too much focus on the lower kHz instruments would distract from this. So, it is a perfect blend of all frequencies working together.

Overall, the riddim is slick and extremely well-arranged – leaving Daps with a sumptuous platform to work off.

The first thing to note of his performance is that there is no vocoder present, except for the opening when it is used as an effect. Trainline have run reverb across the vocal at times, but otherwise Daps’ voice has not been tinkered with. On that basis, he is impressive. Naturally, he flits between is strong, soaring and rasping tenor, and delicate, breathy falsetto throughout – but here, he varies the dynamics meaning the tenor is at points gentle and the falsetto strong, and vice versa. At times on the backing vocal line he contributes to he also goes down into his baritone range. But wherever he is operating, Daps is strong – especially through that break-point between his tenor and falsetto. What also stands out are the vocal riffs and runs he does. Often on the Dancehall/RnB styles he is known for, sometimes his technical skill as a vocalist can be lost behind the instrumentation. But here, partly thanks to that slick mastering, Daps’s voice is clear and it allows him to show of his ability to run rapid riffs and glissandos with pitch-perfect ease. He makes good use of switching between vertical and horizontal embouchure too and his vibrato is eloquent and controlled.

Then, his singjay across the verses is equally strong. He takes a basic, dotted-note rhythmic stanza and embellishes it well, slowly building the syncopation as it progresses – then doing the same on verse two but mixing it up even more. Daps’s singjay is also crisp and clean, and rhythmically interesting. Overall, he executes the two styles (vocal and singjay) brilliantly together, especially given his staple sounds are Dancehall and RnB, not Reggae – but he shows here just why he’s so talented and versatile, as his performance is superb.

But perhaps the biggest endorsement of Daps that is needed is his lyrical content. He’s made a name for himself with his equally impressive, sexually explicit gyal-led tracks; the remix of Call Me If with Tory Lanez and Louie Culture is perhaps one of the greatest and musically/artistically smart anthems of the past few years (Daps, Lanez and Culture on one track? Genius). But what Blessings shows is just what an astute conscious lyricist he is. With his vocal to the fore, here he laments the hardships he’s experienced in life (“from me a 15 me affi support myself… me affi hustle hard”), growing up in Seaview Gardens, to his progression as an artist, via those who would do wrong by him and everything in between – but with the central message that, whatever happened, “don’t you be grudgeful, it’s just a blessing” – reminding us not to “come low life” – and give thanks to Jah in the process. It’s emotive and engaging and Daps weaves a strong narrative throughout.

Overall, Blessings is a masterstroke from Trainline. The riddim is quite superb: unfussy yet skilfully and beautifully constructed to make a rousing piece of music. Daps is at the peak of his powers, showing with his impressive vocal why he is the best of the best – and then blowing us away with his conscious, thoughtful, and moving lyrical content. Simply brilliant – and one of the surprises of 2022.