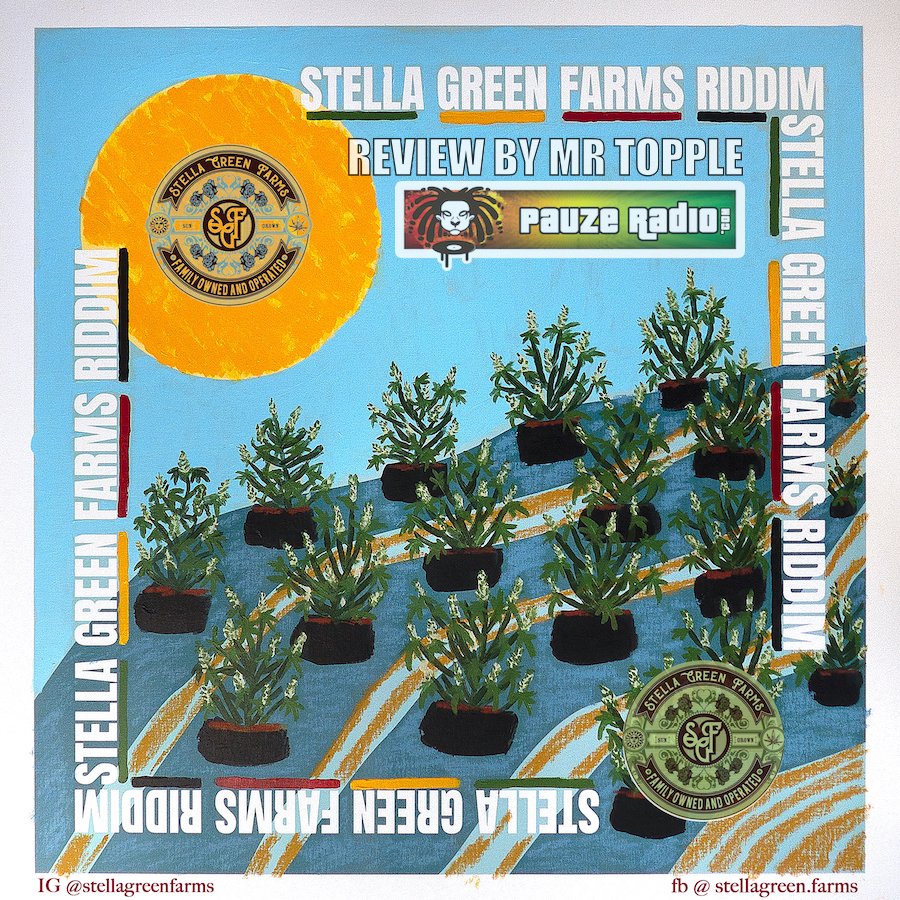 April 2021 is shaping up to be a quality month for new riddims. First, we had Ambassador Musik’s Road Tripp. And now, DJ Oddio is back with a new offering, too: a musical vehicle for a weed production farm. And he’s got some top artists to collaborate across it.

Stella Green Farms Riddim, released via Oddiowave Records, sees Oddio, along with producers Shield and Buckler Music, take a deep dive into funky Roots. It’s a complex affair, littered with multi-instrumentals and also variations on the basic riddim for the different artists. Of course, the riddim is specifically designed for Stella Green Farms in California to promote their growing season. But the team handles it all with style and panache, with high-class production and engineering to boot.

Its opening almost feels a bit Trap – but the riddim soon settles into its style. Central to this is the bass, running a drop-beat rhythm which skips the two. Overall, it runs a moderately syncopated rhythm, which melodically runs around the diatonic scale, avoiding traditional Roots broken chords. Its sound is smooth, too – running legato across the notes to create a continuous fluidity. Then add in the keys: staccato in terms of length, they do a continuous bubble rhythm with little variation from this except for the odd occasion the rhythm is mixed up into a decaying Dub sequence. These and the bass are central to providing Stella Green Farms Riddim’s momentum.

Drums then get involved. The hi-hats are interesting: on the verses generally striking just the offbeats, but then becoming more syncopated on the chorus – running an ‘and-two’ rhythm across each beat. The snare hits the two and four, as does the kick – so an effective one drop is formed, albeit with the hi-hats providing variation on the standard double time arrangement usually seen. Additional cymbals crash in at points, and the drums ultimately serve to provide some control to the bass and keys forward motion.

Oddio and Shield and Buckler Music then bring in electric guitars, delicately skanking in the background. But an additional acoustic guitar also riffs on occasion towards the end of some bars. There’s also an inspired selection of horns across the track. A trumpet, sounding high-passed and rasping, runs around a melody at some points; a trombone does similar. Then, a lightly vibrato’d electric organ, which is prominent during the opening, tinkers just out of earshot on the chorus, running its own melody. Additional synths, including a well-placed spaceship gun ‘pow’ and electronic drum effects bring in some Dub.

But a melodica is also included as a central instrument. It runs a countermelody across the verses: syncopated, melodically intricate and expressive with light and shade. Then it performs a repeated motif on the choruses. It’s a nice touch and nod to more traditional Roots. Overall, the riddim provides an atmospheric platform for the artists to bounce off.

Perfect Giddimani opens proceedings with Joker; starting the track with a tongue-in-cheek spoken word section. Across the rest of the track, he is forthright and gruff – focusing on his more abrasive singjay on the verses, building each with increased rhythmic variation. Giddimani delivers a memorable melody on the chorus which fits well with the main riddim. And his lyrical content, essentially storytelling about Stella Green Farms’ growing of I Grade (and the plants themselves), is amusing and serves its purpose as a theme song for the company.

Next, and the incomparable Royal Blu gives us No Joke – here maintaining the same riddim arrangement as Giddimani’s offering. Blu’s style is different to his, though – being more relaxed across the track. His singjay is smooth and fluid, gliding across the fairly complex rhythmic patterns. These are varied extremely well – with pertinent use of breaks on the second verse. He brings with this a straight vocal on the chorus that displays his usual, soulful style – performing pleasing glissandos between notes along with pointed mixing of staccato and legato notes. Lyrically, Blu extols the virtues of cannabis well versus the system-imposed perception of it. Overall, an impressive offering.

Fresh from his work on the also-new Road Tripp Riddim (like Giddimani – read Pauzeradio’s review of that, here) is Lutan Fyah. Weed Ooh is across a similar version of the riddim to the previous two interpretations. But it has some pointed Dub-like breaks and also more of a focus on the melodica – with an impressive albeit brief solo section. The whole thing is peak Fyah. His signature style is fully on display, here: that blurred line between a singjay and a Soul vocal. Fyah brings distinctly complex rhythmic patterns to Weed Ooh – showing a high level of dexterity with his enunciation throughout. His delicate vocal moves up and down his wide register well and lyrically his own thoughts on the importance of weed are engaging. The usual fyah from Lutan.

Pressure (Busspipe) brings us Good Herbs – and the production gives us a musical variation on what’s come before it. There’s a brilliant bridge two thirds of the way through – which brings in some Dub synths, a heavy dose of reverb and some inventive engineering of Pressure’s vocal. And his performance is of course on-point. Here, he adopts an almost chant-like approach to parts of it: wailing and running around his mid-tenor register. His timbre is crisp and clean; rhythmically Pressure brings interesting variation across the verses and delivers a memorable chorus. Lyrically, like Fyah he brings us the positive effects of cannabis with some spiritual context too. Stirring works.

It’s difficult and unhelpful to point out a stand-out interpretation of Stella Green Farms Riddim. But Runkus with his track General is close to it. With it he brings a more Afrobeats feel to his performance: heavily vocal in melodic style, but rhythmically employing the tactics of singjay – he really is impressive. The pace of some of the verses in terms of syllable count makes you stop for breath. His use of sharp, staccato notes is particularly attractive. Melodically, he is extremely inventive – performing intuitive runs at times, then paring it back at others. General’s musical arrangement has also been tinkered with accordingly to fit this, working very well. The backing vocals are perhaps the most complex of the entire riddim, with a heavy arrangement and engineering to boot. And lyrically, Runkus is entertaining, too. If Oddio and Co. wanted to release a main track from Stella Green Farms Riddim, this really should be it. Superb.

D’Original Reverence is still a largely new artist, having been around just a couple of years. But across the track Buckler and Shield he shows real potential for a sparkling future. He has a very recognisable style: laid back to the point of falling over, but without compromising technique; no mean feat to pull off, but Reverence achieves it. He has a smooth, flowing style which almost merges the notes into one – but not quite. Juxtaposed with this is a highly accessible enunciation: a difficult balance to strike which he achieves. He has a pleasing tone that morphs throughout Buckler and Shield, from a husky, lower register timbre to something more resonant and rasping higher up. Reverence mixes up straight vocal with singjay, providing good rhythmic detail and an ear for an attractive melody. Lyrically, this Song of Praise stands out as the only non-herb related track of the riddim, which works well. And overall, it shows Reverence’s potential as a blossoming artist.

The selection concludes with a refreshing Dub version from DJ Oddio himself – mixing up the basic riddim with some good use of Dub devices, intelligent and provocative engineering and clever use of rhythmic variation. It works well as a closer, and shows Oddio’s creative and expressive side well.

Stella Green Farms Riddim is a very solid and sure-footed piece of work. Oddio and Shield and Buckler Music have shown a creative force to be reckoned with. All the artists have delivered high-quality interpretations (Runkus undoubtedly being the standout) and the whole project is well-constructed and pleasing to listen to. The actual Stella Green Farms should be very happy.