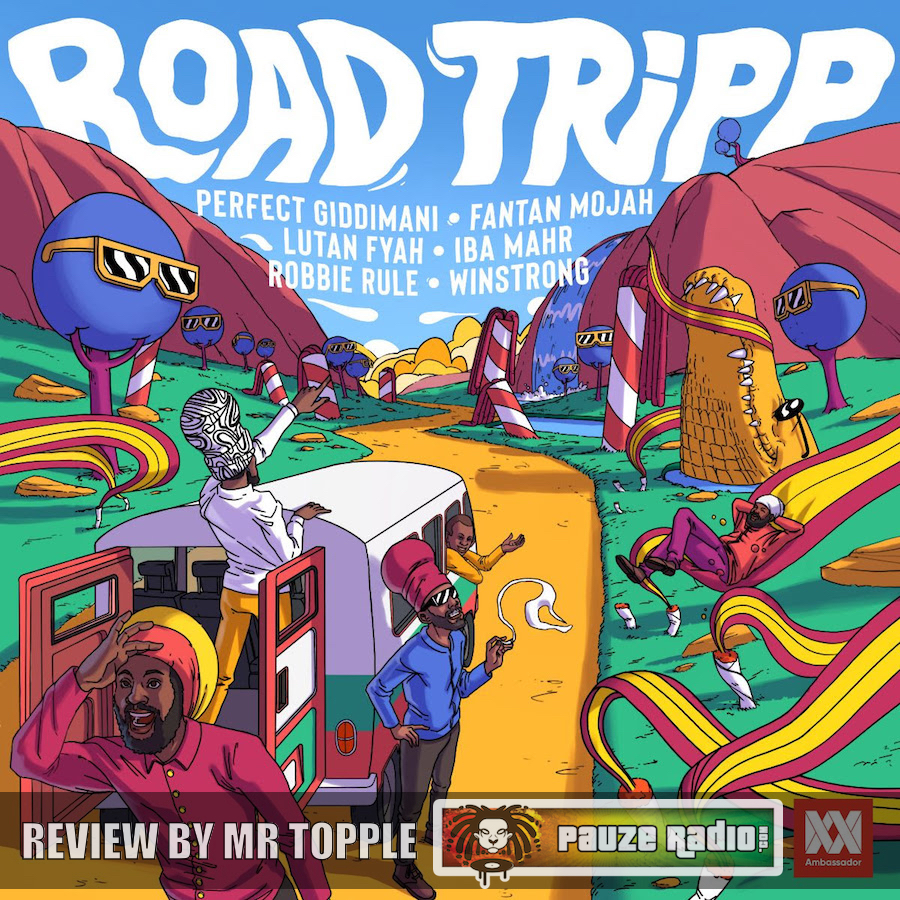 The latest release from Ambassador Musik is a timely affair. Because as parts of the world emerge from the coronavirus pandemic, the label takes us on a musical ‘road trip’ – and the result is a very pleasing and affecting journey.

Road Tripp Riddim, released by Ambassador Musik, is a rich and potent affair. Upbeat and uplifting, it features some strong use of traditional Roots devices along with flourishes of ingenuity. Production comes from Ambassador Musik and Sarge Onewise – and they’ve done a superb job in creating a sound that is classic, classy yet still fresh.

The rhythm section is central to Road Tripp Riddim. Mildly high-passed keys are choppy and slightly reverbed, running an incessant bubble rhythm that barely deviates from its course; albeit with some pointed breaks. Their rudimentary feel is crucial to the track, grounding it in Roots. Likewise, the bass is endemic of the genre. Resonant and rounded, it works around a winding, dotted note rhythm that skips the fourth beat on the first bar of each phrase. Melodically, it avoids relying on arpeggio (broken) chords – instead opting for its own melody. But importantly, it’s not overly picked, with the notes being smoothed out – which creates warmth and fluidity.

Meanwhile, the drums are a detailed affair. Avoiding a traditional one drop, the kick sounds like it mimics the bass’s focus on the first three beats – with double time rolls on the final beat of the second bar. Then the snare concentrates on the two and four, while hi-hats run a double time rhythm in between. Throw in some additional rolls and riffs on the cymbals and tom-toms and you have a drum line well above the usual Roots fayre. To finish off Road Tripp’s rhythm section, an electric guitar performs occasional skanks and riffs, with a rasping tone.

Ambassador Musik and Onewise have added additional instrumentation, too. A secondary electric guitar line performs call and response riffs which are an octave apart. But its timbre is different to the rhythm guitar, with heavy bending added and an almost Surf Rock, whining vibe going on (where the instrument is played nearer the bridge). There’s a brilliant use of a high-pitched whistle synth, which breezes around above the other instrumentation. Additional percussion also includes a well-placed clapper.

But then out of nowhere, there’s a superb bridge – which takes on distinct overtones of Dancehall. The rhythm section comes together to perform imposing chords across a Dancehall clave rhythm (that ‘oneeeeee-twooo-and’ x2 beat). It’s a brilliant move by the producers, creating a feeling of sudden acceleration in the track – fitting perfectly with the road trip theme. It should be noted that across all the artist’s interpretations, the backing vocals are heavily Soul: using combinations of straight harmonic accompaniment and call and response arrangements. Overall, Ambassador Musik and Onewise have created an attractive base riddim. Then, they have worked with several legendary artists to fully pull the project together.

Perfect Giddimani delivers the title track in his own, inimitable style. Veering between his signature, growling singjay in his higher register and a softer, more soulful vocal lower down, he gives a performance full of light and shade. The first verse is quiet, reflective and somewhat delicate in Giddimani’s lower register. But then from the bridge and chorus he ups the ante, moving higher up his register and increasing the decibel count along with the range of intonation before hitting the Dancehall bridge furiously and frantically – in perfect keeping with the music. Giddimani always impresses, and here is no exception. Musically, he’s delivered a pleasing performance (with a catchy chorus, too). His thoughtful lyrics about viewing life, with its ups and downs, twists and turns, as a metaphorical road trip are compelling and well-constructed. Stirring stuff.

Fantan Mojah gives us his interpretation with Everyday 9 to 5. He’s different in style to Giddimani – almost possessing a traditional Nyabinghi, chant-like approach to his delivery. He starts as he means to go on – in an upper tenor range (hitting an impressive treble clef A sharp during the chorus without going into a falsetto) with a forthright level of volume. Mojah’s rhythmic arrangement is delightful: taking the Roots-standard dotted notation and mixing it up across crotchets, quavers and on occasion rapid semiquavers. Again, like Giddimani he has naturally honed in on the Dancehall bridge to deliver a breathless sequence – and then moves into a falsetto just to impress further. Lyrically, his musings on the drudging entrapment the system metes out on us all, versus the spiritual strength and faith we need to persevere through this, is compelling. Overall, Mojah is on point.

The excellent Iba Mahr progresses Road Tripp Riddim further with World in Problem. His voice is instantly recognisable – combining elements of Soul and Roots while turning his hand to any genre (check Pauzeradio’s review of the track Fully Advanced). He works around the high-end of his register, filling the performance with melodic runs and intricate, almost improvised, syncopation. What stands out is rhythmically he veers between dotted notes and straight ones – at points delivering repeated bouts of semiquavers without stopping for breath. He also makes very good use of an almost yodel style – letting his voice break from one note to another – and also keening (that ‘wail’ timbre). Lyrically, Mahr delivers a searing sermon on the state of the world and the chaos the system metes out – with his interspersed chuckles indicating our collective knowledge of what the system is up to. Extremely strong work.

Lutan Fyah as an incomparable artist: consistently producing a stream of work which is invariably top-quality. Here he gives us Blessed – and it stands in contrast to Road Tripp Riddim’s previous interpretations. Fyah’s performance is more reserved than other artists, honing in on his soulful timbre extremely well while juxtaposing this with Roots rhythmic sensibilities. His delivery is precise, hitting every note in a pointed manner, but he ensures that there is smoothness across his phrasing. Fyah uses varying dotted notation across Blessed. But it’s his melodic work which really impresses. He’s composed something well above usual Roots: detailed, running up and down his register but also with clever use of multi-note motifs; for example his use of 7th-to-tonic phrasing embeds the soulful feel. Lyrically, it’s thought-provoking stuff. Fyah gives us a vulnerable and honest performance about personal faith, how it can falter and how we can all stray from the righteous path we should be on – but also then how we find our way back, again. Wonderful.

The One is from Winstrong – another artist who displays his versatility across Road Tripp Riddim. Here, we delve into Lover’s Rock territory in terms of Winstrong’s thematic content and performance. He is pure Soul-Rock: resonant yet raspy across a high tenor, he mixes Roots dotted notation with Soul-led vocal runs that cover around an octave at once. While his delivery is generally forthright, Winstrong mixes up his style – at times, heavily clipping his notes then at others using a great deal of smoothness. But on the Dancehall bridge he abandons this Soul-Rock style for a rapid-fire singjay, which contrasts perfectly to the rest of The One. There’s a delicious nod to a Labi Siffre standard and Winstrong’s fulsome lyrics about that ‘one’ love are deftly executed. The One is a smart and pleasing Lover’s Rock ballad across the Roots-led Road Tripp Riddim.

Robbie Rule’s interpretation is Safe Again – giving us politically and socially charged track; perhaps the most direct one of Road Tripp Riddim. His is the most traditional singjay of the six vocal interpretations, which works very well in contrast to the other tracks. Rule has kept his performance unfussy (very appropriate given the complexity of the lyrics). Standard dotted quaver-to-semiquaver motifs dominate, with variations thereof – but with some straight semiquaver work also thrown in. Rule doesn’t melodically mess around either – delivering a memorable chorus coupled with single note focus on the verses. He keeps his decibel level restrained but not to the point of softness, providing light and shade throughout. But Rule’s lyrical content is his most powerful element – as he pulls apart what the system and politicians have done to Jamaica, how it causes people to act against each other’s best interests but how, if we take collective steps and realise that unity is better division, then Rule’s “little island” can be made “safe again”. It’s a strong contribution, and lyrically stands out from the pack.

Ambassador Musik themselves deliver an instrumental version of Road Tripp Riddim Instrumental, with Onewise contributing a glorious sax line. On top of the basic arrangement, the introduction of a horn section is a wonderful move. Harmonised in layers, rhythmically and melodically it has then combined feel of something slightly more South American, with its tight melodic runs around the tonic, third and fifth, and fluttering technique. Onewise’s sax is full of vocal-like expressiveness: plenty of crescendo and decrescendo, staccato and legato phrasing and good use of vibrato. He does a technically skilled, intense solo section across the Dancehall bridge which works from the lower register up to a high point – and his demisemiquavers (yes, they’re that quick) are perfectly executed. Road Tripp instrumental has also brought the guitar lines to the fore at points – and overall, it shows how a basic riddim can be embellished cleverly without the need for a vocalist.

Road Tripp Riddim is solid works from Ambassador Musik, Onewise and the artists. Inventive, pleasing on the ear and memorable, the producers have combined some deft techniques to make a riddim that sets itself apart. All the artists bring something fresh to the mix; the instrumental version is classy and overall, Road Tripp Riddim is a powerful entry in 2021’s musical roster.