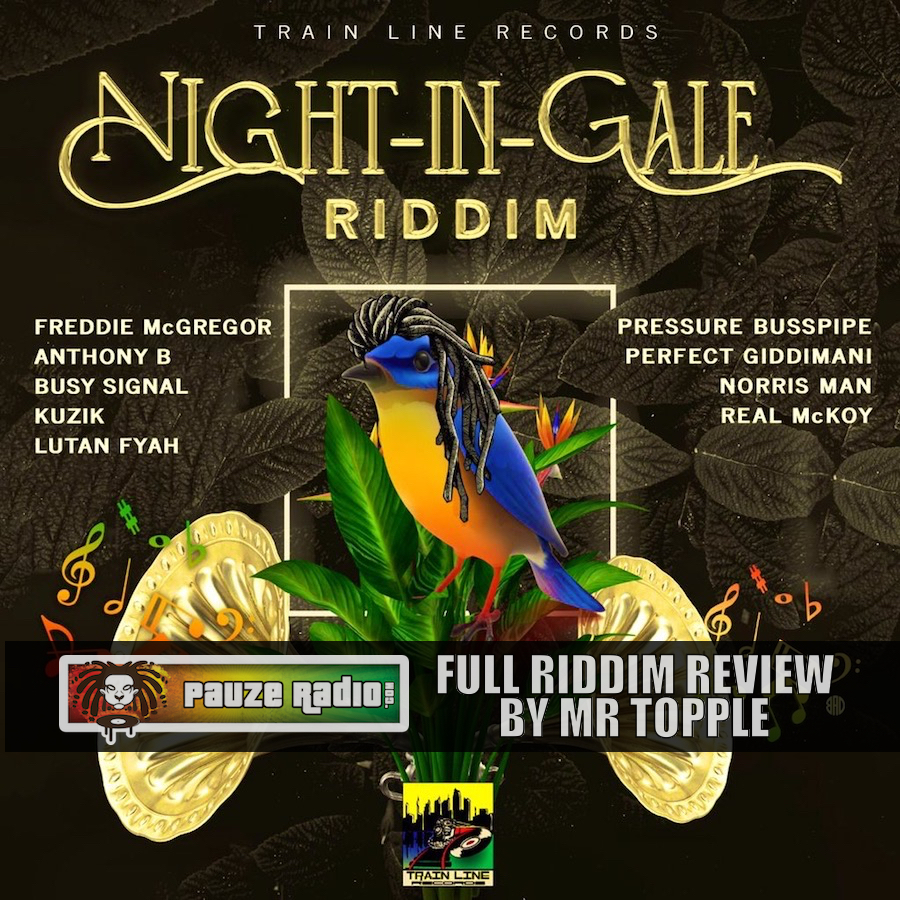 2022 is already going to be off to a flying start in the Reggae scene – as one of (if not the) first riddim of the year sees some of the biggest names in the culture deliver stunning interpretations across a deft musical composition.

Night-in-Gale Riddim, released via Train Line Records on 1 January, sees founder of the label Real Mckoy bring some lush Reggae vibes to the new year. The production and engineering are all first-rate, as would be expected from him and his outfit. Particularly good attention to detail has been paid to the balance of the varying instrumental lines: just enough so the bass and drums drive the track but while still allowing the listener to pick up every intricate detail of the other instruments. And there’s detail aplenty across the basic composition.

Night-in-Gale Riddim is grounded in Reggae sensibilities. The drums are of course central – running a traditional one drop, where the kick and snare focus on the two and four, while hi-hats run a quaver-led rhythm over the top. There’s some nice additional syncopation at the end of certain bars, as well as good use of kette/tin drums and just an occasional flash of something more stuttering from the snare as it does syncopated rim clicks to add movement. Then, the keys play into this with their choppy bubble rhythm. But again, like the drums there is additional interest – here, from the left hand which at times does melodic and syncopated passages in the mid-range of its register.

Good Time’s bass is also central to the track. Interestingly, it avoids a drop-beat rhythm completely. Instead, it uses generally dotted-and-full quavers to create a winding vibe. Then, melodically it works around that old skool arrangement of using arpeggio (broken) chords. But in terms of pitch, Train Line has arranged it to work up and down its register. Overall, this fluid and constantly moving bass offsets the more regimented drums and keys to give the track a ‘good time’ wind.

There are some nice additional touches, too. A delicate, dampened and almost music box-like electric piano tinkers high up its register with an attractive melody. There’s a fleeting appearance from an organ at some points – jumping in with staccato chords. But what also works so well on Good Time is the chord arrangements. Train Line has structured them to be set generally in a minor key, but on the bridges switching this up with a minor-to-major progression – which not only creates a sense of a musical ‘drop’ but also then drives the track forward. Overall, it’s a clever arrangement – and the potential for the other artists on Night-in-Gale Riddim to work some magic is strong.

What firstly stands out about the release is the ingenuity of Train Line’s selection of artists. What it and Mckoy have done so well is to bring on board talents who all bring something different to the mix.

Pauzeradio was humbled to host the premiere of Anthony B’s interpretation, Good Time – you can listen to that here and read our review here.

Busy Signal delivers Place Ah Run Hot – of course, in his own inimitable style. Here, he delivers a sharp, focused and forthright performance, working around staccato (shorter) note lengths to create a sense of urgency. Rhythmically, it’s all heavily dotted to create a swaying wind. Working up and down his tenor vocal register, he’s created an attractive melody which peaks and troughs in terms of intonation while providing a memorable chorus. The use of vocoder is well-placed – and hearing Signal across a Reggae track is refreshing. Moreover, his lyrical narrative about how the system inflicts poverty, violence and chaos upon us is pertinent. Strong work – and a coup for Train Line.

The legendary Freddie McGregor then changes the pace of Night-in-Gale Riddim with Here I Come. He winds the vibe back to something more traditional: long, drawn-out notation that lilts across the riddim with a melody that moves around the tonic of the scale. His delivery is extremely measured – combining the elongated notes with more staccato ones to accentuate the lyrics. But across the bridge, the melody and delivery are mixed up, becoming something more fluid and urgent. McGregor provides some pleasing improv – and his sombre lyrics about the state of the world under Babylon’s system are both thought-provoking and haunting in equal measure. Stark and affecting.

Up-and-coming Jamaican three-piece group Kuzik is up next, with Real People Know Real. Members Kamau, Johnny Kool and Krysi Webb have a lot going for them: vocally well-suited with clear synergy, they make for a pleasing listen – and it should be noted that pulling off a riddim interpretation as a group is a complex task; one they complete to perfection. Once more, they’re different in terms of style to what came before them. The style of delivery is almost Revival in the vocal arrangement, as the three artists wind in and out of each other with heavily-layered background vocals to boot. The varying styles of Kuzik (male vocal/spoken word, female vocal, male singjay) work extremely well and sets them apart from the crowd. The message in the music about staying true, clean and humble in this world is a strong sentiment – and overall, Kuzik have created an extremely powerful and competent offering. A group to definitely watch in 2022; exciting.

Lutan Fyah is always a safe pair of hands on a riddim. And here is no exception with his interpretation Africa Shall Rise. His instantly recognisable style of delivery is strong: that soft yet purposeful tone and rapid-fire vocal delivery across complex melodies is really well executed. He works around the upper end of his tenor register, providing rhythmic detail between dotted and straight notation across a melody which swirls around, up and down – often jumping a full octave in quick succession. Fyah has delivered a veritable Song of Praise for the Motherland, and the whole thing is pure class.

The seasoned Norris Man provides Night-in-Gale Riddim with Deep Conversation: the only Lover’s Rock-esque track of the release. Here, he delivers a performance akin to a Soul singer. Man focuses on a pattern of elongated notation followed by more rapid-fire runs, which creates an ebb and flow to the track. He marries this rhythmic arrangement with the melodic one – moving from more simple progressions to runs with more complexity. His timbre is urgent, frustrated and wanton and his tone higher up his register is pleasing. All this is perfectly pitched with the almost anti-Lover’s Rock lyrical content about the frustrations of mixed messages in a relationship – and it works really well.

Perfect Giddimani jumps on board Train Line’s riddim with Bad Lands. He is his usual, unboxable-in self – veering from the abrasive and pointed signature singjay to a straighter, more soulful vocal; here delivering the former across the verses and the latter on the chorus. He’s rapid, punchy and relentless across all aspects of Bad Lands: delivering complex rhythmic and melodic arrangements to hammer home the lyrics. His use of his falsetto register is particularly pleasing – and Giddimani’s narrative around how faith in Jah and humble self-confidence is necessary when living under Babylon’s toxicity is strong. A superb interpretation which again, is different to what came before it.

Next, and Pressure Busspipe bring us True To Yourself. He’s created a heavily soulful track – which combines the rhythmic sensibilities of singjay with the melodic construction of a Soul singer. It’s very pacey, with Busspipe barely stopping for breath as he runs around complex runs and riffs, high up his tenor register – working from the fifth down to the tonic and then in and around them. His tone is clear and urgent, with nice use of vibrato to accentuate the lyrics. The backing vocals here have also been particularly well-arranged, switching between call and response and straight harmonisation. Busspipe’s lyrics about resolve and personal faith in spite of everything are strong, and the musical epilogue is different to the main riddim – finishing off this pitch-perfect track excellently.

Night-in-Gale Riddim closes with Mckoy’s own take on his composition: Remain Joyful. It’s actually fascinating to hear the producer of a riddim deliver their own take on it – as it gives an insight into the thought processes that went into the music. Here, Mckoy delivers a laid-back, lilting performance which works around the lower end of his register, making use of predominantly dotted notation to fit the track’s wind. Melodically, his construction is smart: recreating the same passage at times but shifting it up three tones, and then five. The touches of vocoder make the track feel bang up-to-date, and the narrative about the positive properties of cannabis is strong. It’s a great ending, and an engaging listen.

Overall, Train Line and Mckoy have produced an extremely strong riddim. The basic composition is very good – particularly the chord progressions which elevate it above standard Reggae fayre. Then, the artists have all delivered tracks with their own individual qualities, which means that the experience remains compelling and varied. And the whole release is a quite brilliant start to 2022 for this impressive outfit. Highly recommended.