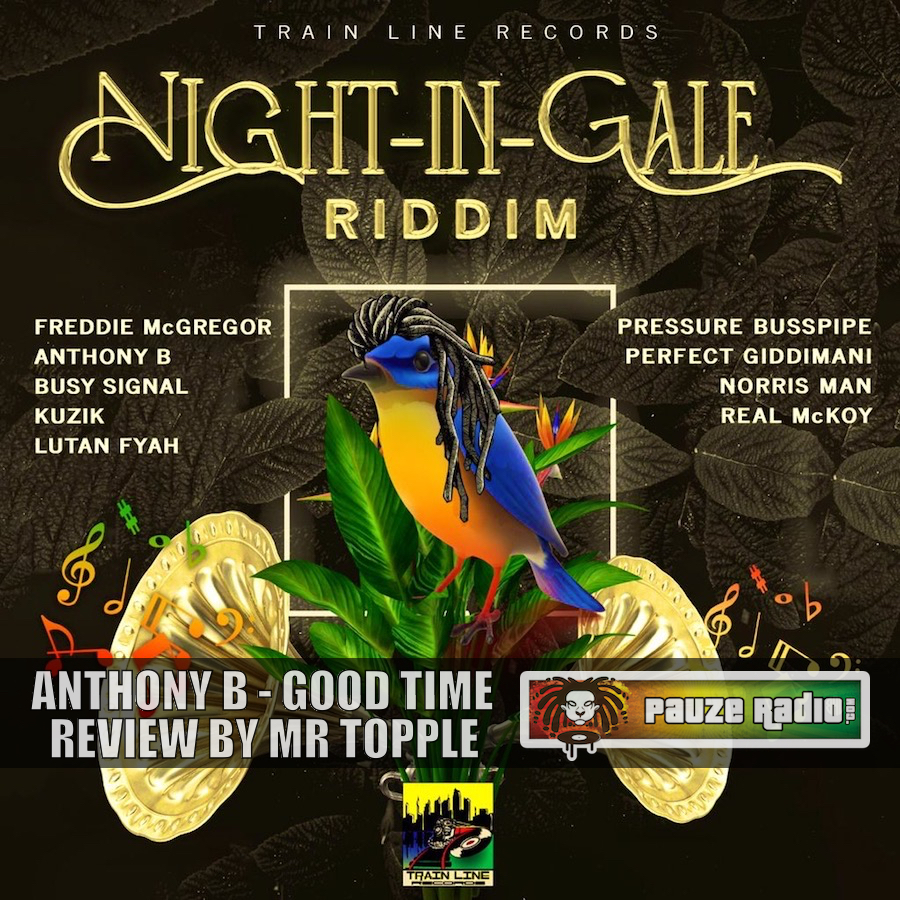 Ahead of its full release on 1 January 2022, an up-and-coming label has exclusively released the first track of its brand new riddim via Pauzeradio. And who better to launch it than Anthony B with the perfect track for the holiday season?

Anthony B Good Time, released via Train Line Records, is the lead single from the forthcoming Night-in-Gale Riddim. The full EP features the talents of huge names like Busy Signal, Lutan Fyah and Pressure Busspipe. But in this first instance, Anthony B delivers a storming opener – accompanied by some slick production from Train Line itself.

The basic riddim is grounded in Reggae sensibilities. The drums are of course central – running a traditional one drop, where the kick and snare focus on the two and four, while hi-hats run a quaver-led rhythm over the top. There’s some nice additional syncopation at the end of certain bars, as well as good use of kette/tin drums and just an occasional flash of something more stuttering from the snare as it does syncopated rim clicks to add movement. Then, the keys play into this with their choppy bubble rhythm. But again, like the drums there is additional interest – here, from the left hand which at times does melodic and syncopated passages in the mid-range of its register.

Good Time’s bass is also central to the track. Interestingly, it avoids a drop-beat rhythm completely. Instead, it uses generally dotted-and-full quavers to create a winding vibe. Then, melodically it works around that old skool arrangement of using arpeggio (broken) chords. But in terms of pitch, Train Line has arranged it to work up and down its register. Overall, this fluid and constantly moving bass offsets the more regimented drums and keys to give the track a ‘good time’ wind.

There are some nice additional touches, too. A delicate, dampened and almost music box-like electric piano tinkers high up its register with an attractive melody. There’s a fleeting appearance from an organ at some points – jumping in with staccato chords. But what also works so well on Good Time is the chord arrangements. Train Line has structured them to be set generally in a minor key, but on the bridges switching this up with a minor-to-major progression – which not only creates a sense of a musical ‘drop’ but also then drives the track forward. Overall, it’s a clever arrangement – and the potential for the other artists on Night-in-Gale Riddim to work some magic is strong. So, how does Anthony B shape up?

He is, of course, the master of delivering slick, engaging performances across all derivative genres of Reggae, as well as highly variable lyrical content. And here is no exception. First, and he has created an attractive and appealing melodic line – simple, yet effective with the bridge and chorus sticking in your memory. But what he’s also done so well is build the intonation – working low down his register on the first verse, before taking up around an octave on the second. He is forthright in his delivery but not overbearing, creating a sense of both fun and urgency. And lyrically, Anthony B has delivered words that are both easy-going but also still with important messages contained within. Throughout, he harks back to an earlier time when partying was fun, with ‘no guns’ – with some nice shout-outs to the big Dancehall artists of yesteryear thrown in for good measure.

Overall, Anthony B Good Time is a strong, entertaining and accomplished piece of work from Train Line. Musically it’s interesting and compelling; Anthony B has delivered an on-point performance and the whole thing bodes well for Night-in-Gale Riddim’s full release on New Year’s Day. Here’s hoping there’s ‘good times’ ahead for us all in 2022.