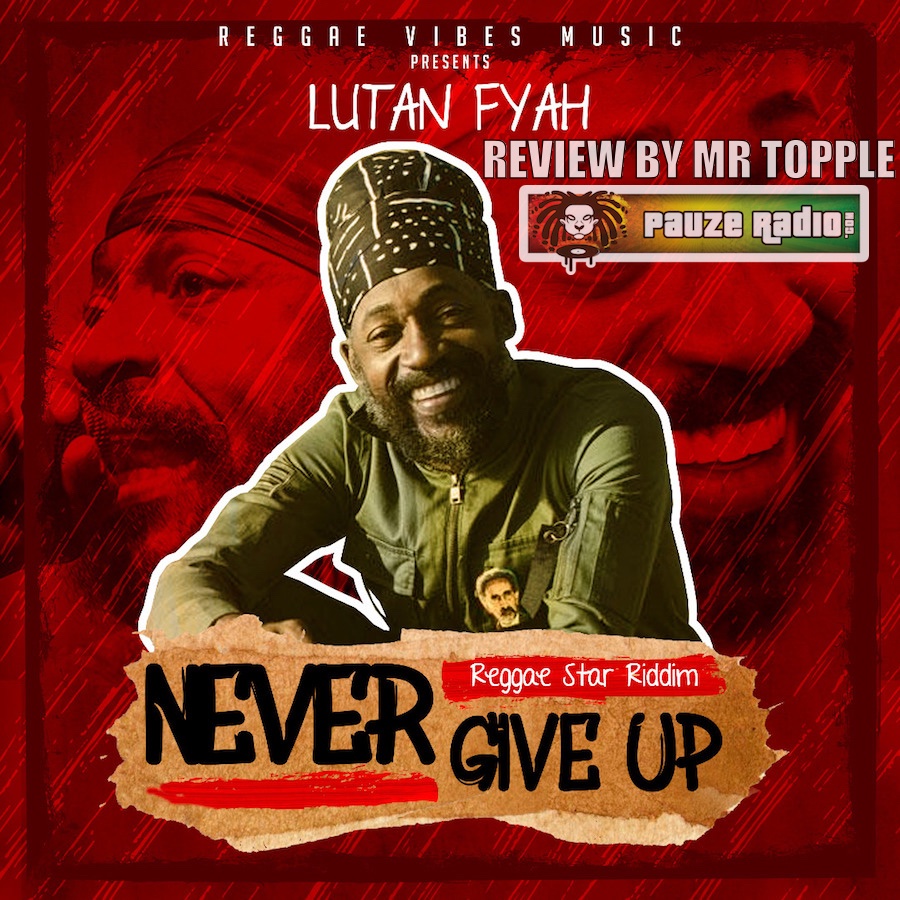 Lutan Fyah – Never Give Up – Review

Lutan Fyah: Never Give Up Single Review by Mr Topple for Pauzeradio.com.

Lutan Fyah must be one of the busiest artists around, because he’s back with another fresh cut. But this time, he’s tackling a subject not often discussed in Roots: mental health and depression.

Lutan Fyah Never Give Up, across the Reggae Star Riddim and released via Reggae Vibes Music, sees Fyah and the team at Reggae Vibes put together a highly impressive, utterly complete package – from the composition, to the lyrics and via the accompanying video from Lonewolf Filmz.

The track itself is ostensibly Roots, with elements of Soul thrown into the mix. Its rhythm section drives the overall vibe and direction, being led by the keys. They work off the traditional, offbeat, stuttering bubble rhythm – but one which is delicately embellished by the right, treble clef hand at the end of every second bar, and then more so on the eighth. The bass is on a persistent, highly syncopated drop beat rhythm which skips the four entirely on the first bar of its phrase, then filling in the final offbeat on the second. Its arrangement is melodically divided between working around the triads of the root chords and running diatonic melodies.

The sum of these parts means the bass drives the forward momentum, but its engineering is such that it’s not overpowering, instead being full and rounded but slightly dampened – which allows the keys to maintain dominance. Drums perform a one drop, with the kick and snare focusing on the two and four as hi-hats fill in the space in between; coupled with additional rolls at the end of phrases. Of note is that the bass dropping the four, coupled with the drums avoiding the one, gives a decent breathing space on each bar – which draws the ear into the keys but also the additional lines.

Guitars offset the keys with a choppy skank. But an additional line from them is included, which serves as a counterpoint to Fyah’s main melody. It runs the occasional riffed responses at the end of bars – wah-wah’d, the mid and treble on the amp wound up and being played nearer the bridge to create that classic, whining Soul sound along with a heavy dose of bending. Gorgeous; much like the sympathetically arranged, Soul-led backing vocals, which combine a mix of straight harmonic layering and call and response phrases.

Nice instrumental variation exists across the various verses and chorus, with the layering of the lines being stripped back and wound up accordingly to accentuate the lyrics. Also, the main bridge is stark – building a brooding crescendo for the track’s final flourish. And a wonderful closing flourish it is, where all the Roots sensibilities are lost and Never Give Up goes full-on Soul: the keys riff and run; an electric organ with the vibrato turned up enters too, running elongated chords; guitars scream and the drums crash and roll. It’s a very clever use of musical juxtaposing and motif-ing, as not only does it stand in contrast to the main Roots drive of the track, but it’s similar to the opening – meaning the track is bookended very well. Overall, Reggae Vibes have created a highly intelligent and aurally pleasing piece of music, which is expertly composed to be utterly memorable. It’s the perfect platform for Fyah to bounce off.

It’s almost pointless reviewing his voice, now – as Fyah is always vocally on-point and at the top of his game. Faultless to a tee, he delivers a performance wholly reflective of the lyrics – measured, without force or arrogance, but still with enough urgency to accentuate the positive message in the face of despair. Of note is the way Fyah clips his notes according to the lyrical phrasing, punctuating important points. But it’s his gentle yet firm delivery, soaring across his impressive range, which is most compelling.

Lyrically, he’s as poetic as ever – tackling ideas surrounding depression, which affects so many of us but isn’t a subject Roots artists regularly deal with. Here, Fyah is urging us to attempt to maintain a sense of hope and positivity, despite what life, people and the system may throw at us. As he muses: “Never give up and don’t let go, it’s all in you. Never give up on yourself, no no”.

Lonewolf Filmz accompanying video is the final piece in this brilliantly constructed project. Cleverly done, it follows three people’s journeys: one, under pressure from work; another experiencing racism and a third struggling with self-confidence and doubt. Shot in the main with a dose of grayscale, shadowing increased, softening and vignette applied, the main bridge marks a change, with each person seen to be reaching a distressing but resolute point in their lives. Then, it switches towards the end to full colour with heavy contrast, signalling the respective characters’ journey through the storm and emergence on the other side. What interesting is the full colour section still has the shadowing turned up – perhaps an allegory to the fact that our demons are always there, it’s how we deal with them that matters. And the electrical firing superimposed onto Fyah’s head is a genius move. Glorious work.

Never Give Up is stunning. Expertly crafted from Reggae Vibes, it should be an instant hit in the making, due to its infinitely catchy melody and sympathetically arranged score. Fyah is, as always, a joy to listen to – here being particularly engaging. Lonewolf Filmz’s video is superb and moving. Inspired work from all involved.