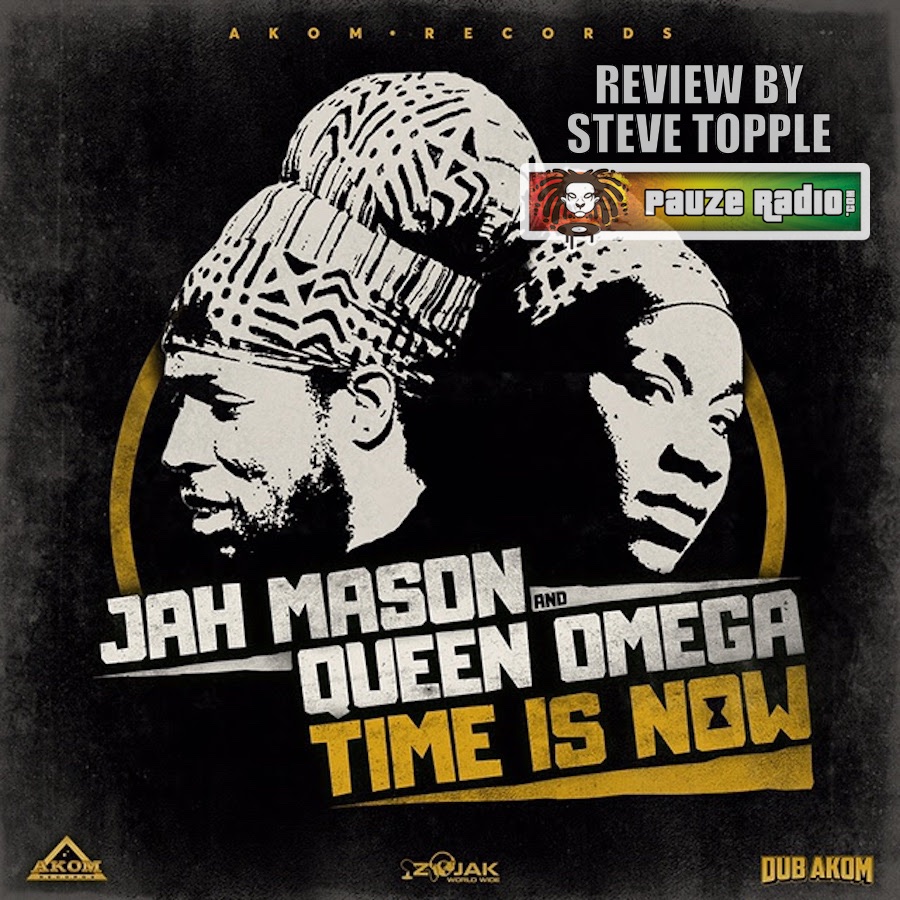 It’s always a pleasure to hear conscious Dancehall-led music. Strong leaders of the movement in 2020 so far include Govana, Jahmiel and Dotta Coppa. But Jah Mason and Queen Omega have just added another worthy track to the community – although calling it simply “Dancehall” doesn’t do it justice.

Jah Mason & Queen Omega Time is Now, released via Akom Records, is a raging, forthright yet elegantly constructed track. The production from Dub Akom is stellar: inventive, smart and utterly engaging. It’s one of those records that gets in your head and refuses to leave; the sign of a genius at work.

It opens with some ominous bells, sounding the metaphorical alarm and hinting at one of the genres in play. But they vanish as soon as they arrive, leaving an intro that builds in orchestration and intensity. Double time keys, crotchet strings, crashing drums and a drawn-out bass all intertwine in a cinematic opening. It, like the bells, has a distinctly indulgent 90’s Hip Hop feel about it – whose heavy and flamboyant orchestration, inspired by Funky Soul, defined the era. It doesn’t last, though, as we’re quickly taken straight back to the 21st century.

Time is Now is pure Dancehall/Afrobeats crossover, and one of the more impressive examples so far this year. The bass is booming, pulsing Dancehall, varying the more standard clave of ‘oneeeeee-twooo-three’ to a stuttering ‘oneee-and-twooo-and-a-[drop three-four]and-a’. The percussion is leaning to Afrobeats, with the snare accenting the off between the third and fourth and the hi-hats avoiding hitting the beats altogether. This combination of a heavy, on beat bass coupled with lighter offbeat percussion brings the best of both musical worlds in.

The string arrangement is persistent, stabbing – and interestingly takes on that traditional Dancehall rhythmic clave that the bass avoids. There’s a gorgeous use of that Afrobeats synth theremin-like sound on brief, half-bar double time riffs, and the keys split between straight piano and the reverbed, high-passed, choral-laced effect sometimes used in the genre but also prominent in UK Grime. The whole thing barely allows you to draw breath – at first.

Because in a musically and thematically clever move, this frantic, driving feel is then starkly pared-back for the chorus, which breaks out (like the intro) into full-on Funky Soul-inspired Hip Hop. The chord changes, drum rolls and main melodic line all move onto semibreves, instantly slowing the track to half the pace without changing the BPM. As the drums move away from Afrobeats offs and ups, now accenting the first downbeat hard and the second light, the bass stretches its riff out and the vocal lines become heavily harmonised and layered. It serves as a musical pause for breath – but also an accenting of the lyrical main message. A nod to classic 90’s Hip Hop while sounding 2020 fresh.

The whole arrangement is scintillating, but equally it’s been purposefully designed by Akom to showcase Mason and Omega’s equally impressive vocals.

He’s on fire across the whole track. The first verse is led by one rhythmic pattern which he then embellishes depending on the phrase, the second part being more syncopated. This is then mashed-up on his second verse, turning into a rapid-fire semiquaver-led bombardment. He’s technically deft at singjay, firing off eight syllables a second at one point. But it’s Mason’s use of melody, intonation and dynamics which are most compelling. He puts the ends of lyrical phrases up in pitch, therefore accenting the key words (“much blood drinking and flesh eating” being a delicious stand-out). His second, more frantic verse is higher in pitch still, and the light and shade in his dynamics (almost whispering at points before raging at full-force) is a joy to hear. But Omega easily keeps up with him.

Her singjay is just as impressive and of note is their matching of styles and techniques, which gives consistency to the lyrics. She too rattles off around eight syllables a second, and in some respects is more forceful and scalding with her singjay than Mason is. But what Omega can do on top is sing. You’d be forgiven for thinking it was a different artist – as her furious singjay is completely contrasted by her rounded, power-housing, Gospel-like vocal. She glides across an upper alto right up into a high soprano – without going into her head voice unless she intends to. She uses expressive use of vibrato, performs punctuated, crystal-clear vocal runs up and down her register and has this deft ability to instantly switch from singjay to vocal without breathing, and back again. And both artists excel at delivering the pertinent and raging message – that as the system burns, we all have to stand firm in our faith and realise that the time is indeed ‘now’.

Time is Now is absolute bliss. Akom, Mason and Omega have delivered something truly special: a track which is seared onto your consciousness through both the musical brilliance but also the two artist’s rousing, stirring and spine-tingling performances. One of the Dancehall/Afrobeats crossovers of 2020 so far.