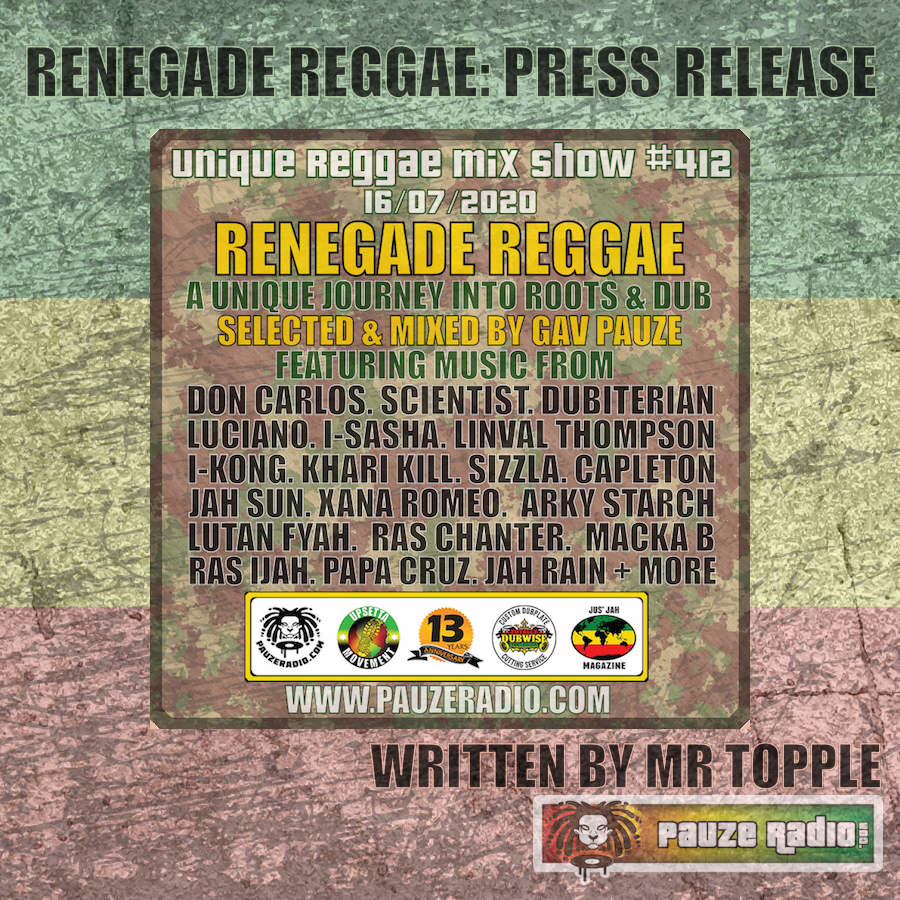 The word “renegade” comes from medieval Latin, meaning to renounce one’s faith. It was historically used as a term to describe Christians who converted to Islam. Over time, the negative connotations have remained, with renegade meaning a treacherous person who has switched allegiances. But much like “anarchy”, this definition isn’t strictly accurate.

A renegade is someone who moves away from convention and mainstream norms; defies the system and pushes agendas of hope for better. The term is perhaps highly appropriate for Roots music: artists who, despite what the system would have them be, refuse to be boxed in and maintain their beliefs and faith. With the world as it currently is, renegades are probably the people we should be looking to for guidance and direction.

With that in mind, DJ Gav Pauze is humbled and proud to have compiled the latest edition of the Unique Reggae Mix Show around the notion of “Renegade Reggae”: music that challenges conventions and delivers messages that defy the system and its architects.

As always, the show is divided up into four separate parts. And listen carefully, because DJ Gav Pauze’s insightful mixing not only seamlessly links one artist to another, but also provides a rousing narrative throughout.

The first segment opens with a selection of 2013 tracks from Nansa Records – and they set the tone for the rest of part one: dealing with the state our world and society is in. The first, Crisis by Papa Cruz, is particularly haunting – as is the timely Children of Israel from Linval Thompson. With A-Lone and Roberto Sanchez at the helm the quality of these cuts is top-class. Luciano and Jesse Royal deliver a rousing track with The Music, from the former’s recent album The Answer. The Bambu Riddim used here is also seen with interpretations from Lutan Fyah and Umberto Echo. The segment finishes with the gorgeous Africa Is My Home from Junior Roy, released in June across the Teardrop Riddim. It serves as a fitting and poignant end to part one.

Part two sees tracks that offer narratives on life and what it means to be human. It opens with a selection of songs from Jah Sun’s 2020 album Magic and Madness. It is a stunning project, not least due to it being entirely constructed by just him and producer Jallanzo. And DJ Gav Pauze’s selections reflect some of the record’s highlights, including the moving Ancient Soul. Three tracks, by Fyah, Longfingah and Macka B, from Kingston Express’s album The Foot of the Mountain, also feature. Then, three more, and this time exclusive, tracks (two featuring the legendary Sizzla) from production outfit Sound Guyz are also included. And part two wraps up with Synthdicate Music’s Rankin Skankin Riddim from May this year.

In segment three, DJ Gav Pauze brings in themes of the social and spiritual battles that individuals and our species collectively face with the system. But there’s also an overriding narrative on faith and spirituality. From Ras Ijah and Aima Moses’s collective call-to-peaceful arms, Rise My People, to Unemployment Records Jah Guidance Riddim – messages of action, hope and trust in Jah feature heavily. Up-and-coming artist Arky Starch delivers two tracks: Pull of the Strings and Only He Will Judge, showing the rest of 2020 will be a big year for this emerging new talent. The ever-reliable Kris Kemist and Reality Shock Records deliver three cuts around the notion of ‘war’. And the exciting and gifted Xana Romeo concludes part three with two songs, recorded five years apart – showing her unstoppable talent.

The mix closes with segment four, exploring how to deal with part three’s challenges. It opens with seven interpretations of older tracks, all constructed by Scientist; not least among these being the Horace Andy classic Money Money, brought up-to-date with some help from Dubiterian. The sublime Perilous Times Riddim from Jah Rain’s Iyah Vybz label is well worth a listen, especially Dan Gio’s interpretation, called Lead the Way. His EP Emotional Tide was a strong release this year – setting a high bar for Roots-derived music which borders on Neo Soul. Tasjay Production’s Outta Jamaica Riddim is stirring, pertinent work. And the show finishes with the incredible LawGiver’s Jah Neva Fail I – a rousing and striking conclusion, befitting of ‘Renegade Reggae’.

As always, links to the show are here and many of the tracks are available to buy on vinyl in the Pauzeradio shop. 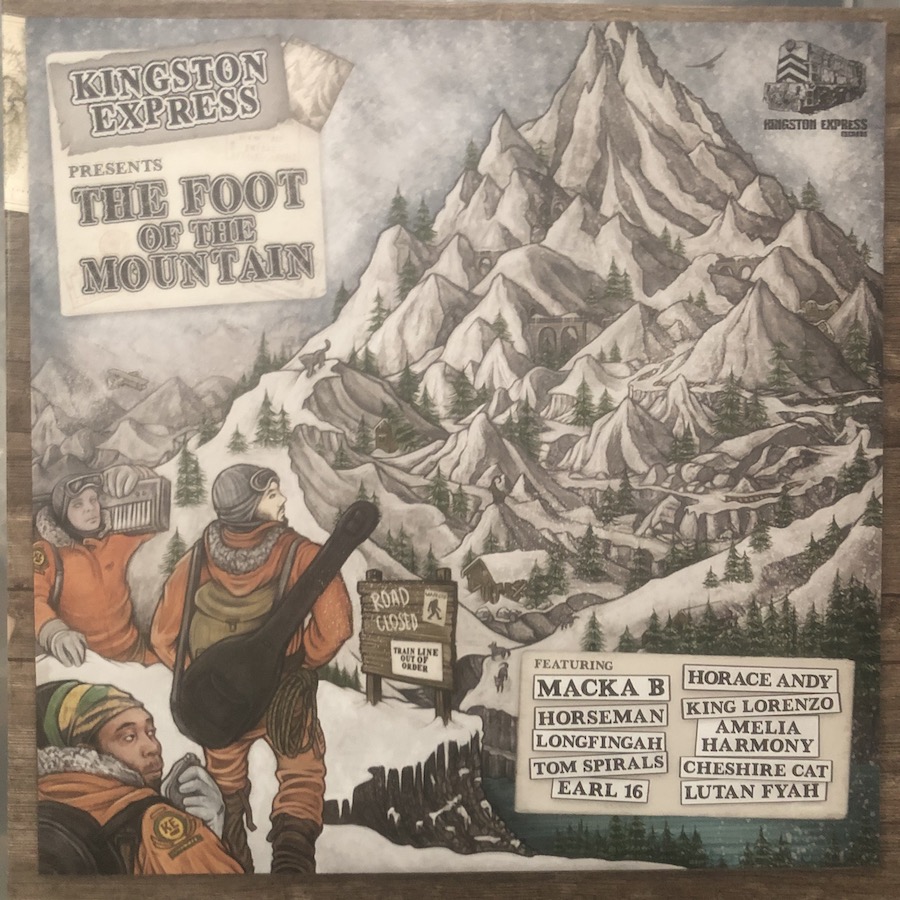 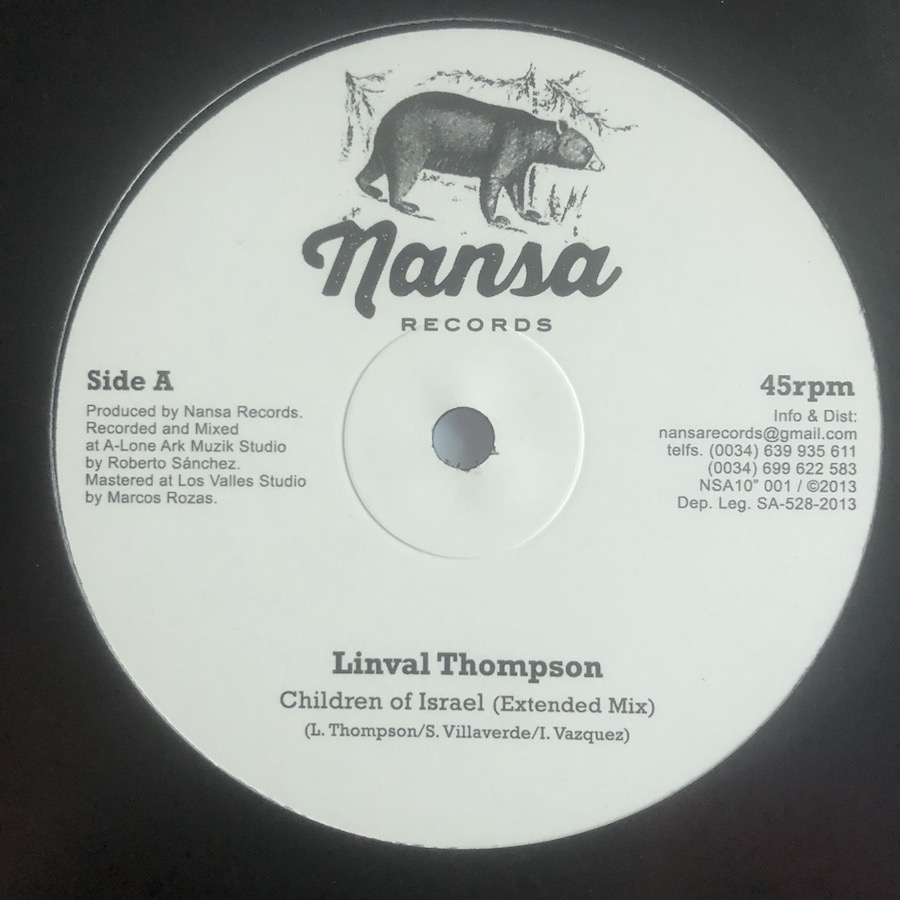