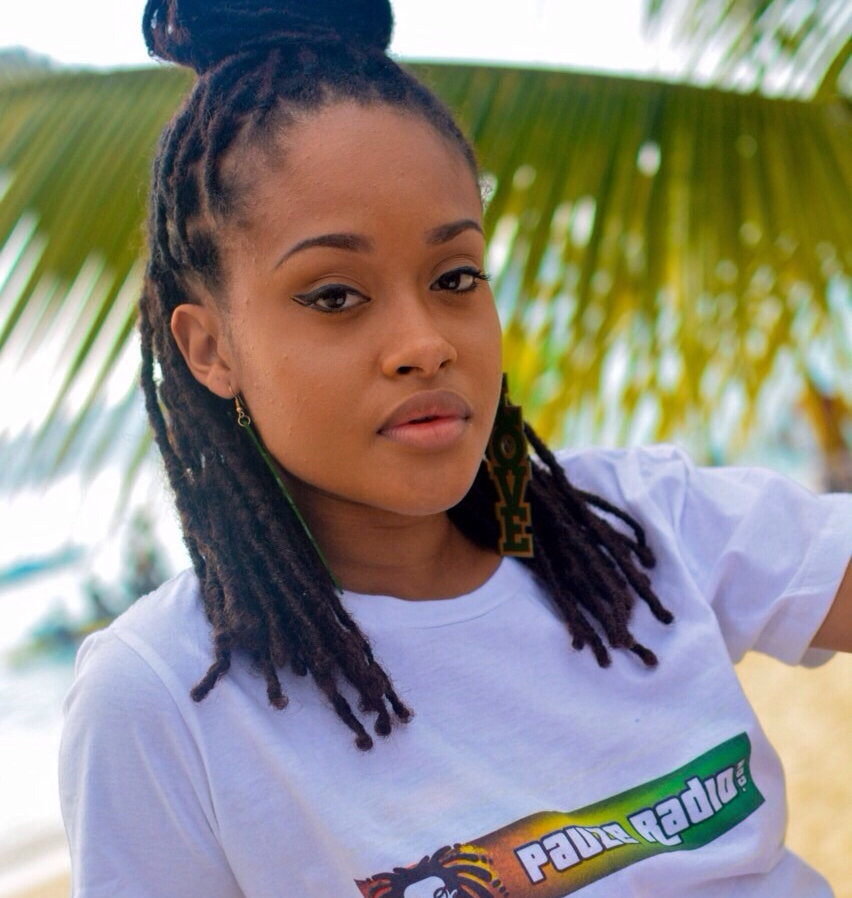 Xana Romeo, Born Azana Makeda Smith on August 26, 1994 in a small community called Greenwich Town in Kingston Jamaica, Xana Romeo is the youngest daughter of Reggae veteran Maxie (Max Romeo) Smith. She has been playing around with music her entire life but more recently in 2012 she decided to make it her career choice.

Choosing her musical path with conviction Xana has become a fast rising Roots, Dub Reggae artiste. Her talents stem much further than singing though, as she also writes her own songs and is heavily involved in the business side of the industry too.

Xana Says; “I look up to my dad as an idol in the music business as he’s the one who inspired me to sing music for the people. He’s the only person that I not only know his substantial music catalogue but also his way of life and I can say from my heart that he lives a life that one can copy from. Close to the teaches of His Majesty.

I prefer to sing not too high as it’s the purpose of my music is the message, that is what I focus on, not my pretty voice. I don’t want the public to get lost in the voice and forget about the message. When someone listens to a Xana Romeo’s songs I want them to feel Cleansed, inspired and for them to learn, not just to feel excited from my sound.”

Her influences come from a variety of other artistes as well as her Dad, she likes and rates; Hugh Mundell, Augustus Pablo, Stephen Marley, Jacob Miller, Burning Spear, Black Uhuru, Uroy, The Congos, Derrick Morgan, Dennis Alcapone, Amy Winehouse, Etta James. Her favourite producer is Bunny Striker Lee who is also her god father. As well as these veterans she enjoys listening to King Tubby & Lee Scratch Perry dubs and highly respects the knowledgeable teachings of Mutabaruka.

In the early throws of 2000, Max Romeo moved with his wife and children to a place called Treadways, located in Linstead St. Catherine Jamaica. This is where Xana finished school and currently resides with her parents and siblings. Learning the business aspect of the music was a progressive move for Xana and she is the manager of her father’s business, Charmax Music enterprise. This includes the Red Ark recording studio, Charmax Music label and vinyl company.

The Red Ark Studio is where all of her tracks are recorded, produced, mixed, and mastered. Working alongside her dad Max Romeo, brothers “Rominal” and Omar Johnson, otherwise known as “Jallanzo the Muliti-talented” from the well known, popular Roots band “DubTonic Kru”.  Calvin Bennion of “Firsteye production” from out of London, England is also a part of the team.

Currently in the process of working on her first album that is set to be released in 2015. Her defined view and passion for real music influenced the project which will be a Roots album with Dub Treatment in the mix, as that’s the section of Reggae that Xana has chosen to put all her focus on. Over the years her love for Roots and Dub music has grown and now she is involved in composing Roots and Dub Instrumentals, assisting with the arrangement of the tracks.

Aside from the music, Xana is a very artistic individual who enjoys creating her own art, paintings and drawings along with other creative art forms in her spare time. A firm dream that she has for the future is to release her own African Print Clothing line, as she has a deep love and passion for African fashion. With a large creative influence Xana’s skills do not stop short here and photography is included in her list of interests and passions, always having a camera to hand, she likes to take random snaps of whatever strikes her interest or catches her eye.

With a large and growing list of Major producers and musicians and with being featured on a few shows with her Dad and brothers, including Rominal. Xana Romeo is set to tour Europe and the world in the upcoming year, aiming to leave an unforgettable mark in the Reggae music industry as effective as her Dad has and continues to do.

The first single released to the public was titled “No Love” and unforgettably released on her birthday of August 26th, 2014. Gaining more public attention using her words and unique sound, her next release was on February 1st 2015, titled “Righteous Path (Our father)” and lit up the airwaves on a huge scale.

This is just the beginning of Xana Romeo as she has been gaining momentum, becoming a highly talked about and highly rated artiste amongst radio DJ’s worldwide as well as the listening masses. This stands her in firm stead for her next release, which is highly anticipated by all real Reggae music lovers, set for August 6th, named “Rate Rasta” This will be the third track from her upcoming album.