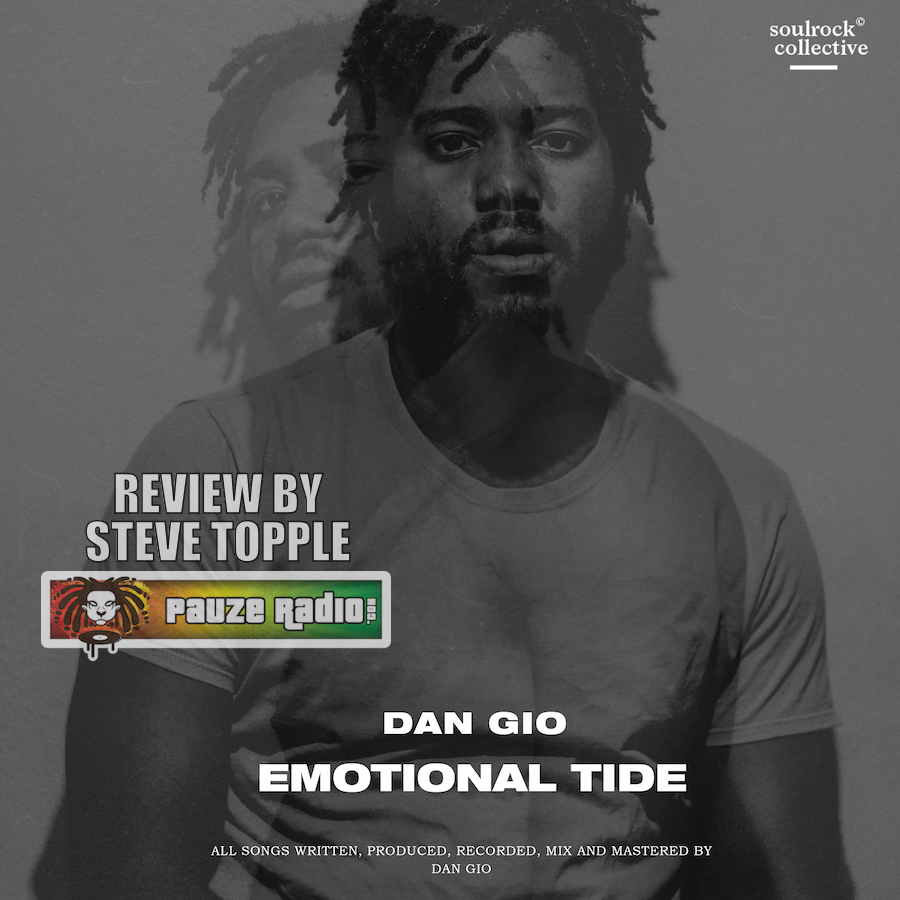 Royell Walker aka Dan Gio has been honing his craft for several years, now. But it appears he may have hit the pinnacle of his powers. As his new EP is, not to put too finer point on it, a revelation.

Dan Gio Emotional Tide, released via Soulrock Collective, is a furious yet gentle, angry yet touching delve deep into human emotions and their intersections with the system. With all roles (composition, production, mixing and mastering) performed to a top-class level by Gio and his Soulrock Collective label, it’s a highly personal project which showcases this talented artist’s skills well. But moreover, it’s a delicious hybrid project – with Roots-derived music at its heart but a modern form of Neo Soul in its head.

The EP opens with Free. It’s a haunting, Neo Soul affair: brooding and thoughtful in equal measure and musically ambiguous – which sums up the EP as a whole.

The bass errs towards a Roots/Dub riff, dropping the second beat of every first phrase as well as focusing on the offbeats at times. But the one-two-three crotchet, on beat arrangement on the second phrase is far more Soul – and this genre-mashing sums up the whole track (and the EP) well. The keys, working off roots chord breves, remain at this constant throughout; giving some smoothed continuity. The drums have a curious arrangement; almost a one drop but without the kick. The beamed hi-hats are atypical of this. And the snare hits both upbeats on the first bar, again on the second but with the final ¾ off as well. This gives the rhythmic feel of Roots, but without the dominant kick, nor the often-used cymbal flourishes on the final beat.

But it’s the strings which are the instrumental centre piece of Free. They begin on a pizzicato (plucked) riff in the opening, fascinatingly engineered to be both slightly sharp in pitch and with decay that quickly swings in and out. This riff is a constant throughout. But then another string line takes the track into full blown Soul territory – running a bowed, smooth and layered line which then leads into verse two – and due to the stripping away of other instrumentation exists as a counter-melody in its own right.

What sounds like a melodica makes a brief, extremely high-pitched appearance, as do some synths – both hinting at the Roots heart of the track. And Gio’s gorgeous performance often cements this heart – soaring across an intuitive singjay at times, which is both rhythmically intricate as well as musically deft. But with Free’s overly Neo Soul leanings, Gio’s vocal fits in with this too – his skilled, versatile tenor gliding effortlessly across his range, improvising at times and doing technically ambitious vocal runs. The backing vocals are distinctly Gospel-influenced, and all this combined makes Free a 21st century Neo Soul masterclass, which has its grounding in Roots. Perfection.

Next up, and Survival moves Emotional Tide into more RnB-Rock territory, much like its label’s namesake. But again, all is not what it seems, and the track is more intricate than that. While the chord-strumming, acoustic guitars are overly RnB driven, the more intricate solo riffs have the feel of Soca about them; this is then enhanced by the repetitive shaker. The snare, driving the offbeats entirely, also has that feel with its beamed rhythm – but slowed right down. RnB comes back again with the unfussy keys on chords which hold for most of the bar before transitioning on the final offbeat. But the whole arrangement hangs on the fact that the bass has been engineered almost out of existence. You barely notice its presence, and this in turn gives lightness and airiness to Survival – in sharp contrast to Free’s heavy, unsettling vibe. Once again, Gio’s vocal impresses – leaning far more towards straight singing in this instance, but with an urgency and unflinching intensity that contrasts well against the airier instrumentation. Classy, well-considered work.

Following on from Survival is Choices. In a similar vein to its predecessor, Gio has stripped away the complex percussive line and replaced it with a more Hip Hop driven, kick and hi-hat-heavy arrangement. The guitars still lilt on riffs and ominously strum on chords. Again, the bass is not prominent. But those heavily orchestrated strings from Free are back, this time with a more complex arrangement – alternating between drawn out chords and a more syncopated pizzicato section, almost out of earshot. Meanwhile, rasping, stabbing horns put in an appearance – coming in and out with clipped, punchy chords. The whole arrangement is Neo Soul, but it has distinct overtones of that 90s East Coast Hip Hop, whose musical arrangement was often heavily orchestrated and almost cinematic in nature.

In a bold move, I Love You does away with everything that’s come before it. Utterly stripped back to just acoustic guitar chords and percussive snaps, with some reverb on the vocal, Gio delivers perhaps his finest vocal performance of Emotional Tide. It’s no mean feat for an artist to be able to completely hold their own over such a basic instrumental line – but Gio does it with ease. Passionate, his gritty yet perfectly pitched timbre oozes sensuality and emotion. His syllable phrasing and intonation drives home the lyrics; there’s attractive light and shade in the dynamics and his ability to flip quickly between his tenor and falsetto voices is faultless – at times almost breaking back to the tenor voice at the top of his falsetto range. It’s highly emotive, highly erotic but also highly spiritual. Shiver-inducing.

Dan Gio Emotional Tide moves away from the more Neo Soul elements and into a Roots dimension with Ego. The guitar skank is unavoidable, and is the driving force for the feel of the track. Keys are on a bubble rhythm, cementing Ego’s Roots credentials. But the instrumentation is again far more complex than that. On top of the skank, the electric guitar line does an atmospheric solo, which puts you in mind of something more Bluesy, with its arpeggio chords – albeit without the vibrato and bend. The drums avoid a one drop, with the kick singularly accenting the first downbeat, then doubling up on the next. Djembe fill in beats two and four with the same pattern. The ambiguity of the percussion is only slight, as ultimately it has the feel of something from the Motherland – and this combination of Roots devices with musical nods to the genre’s own roots creates a stirring yet humbling sound. And Gio is obviously comfortable in this stripped back yet evocative style – soaring across vocal and a hugely impressive singjay over the sparse instrumentation to deliver another rousing performance.

Love and Hatred returns to RnB territory – but this time heavier on the Soca. The hi-hats are the dominant percussive force, providing a wound-down ‘rat-a-tat’ that just needs a snare and an increase in BPM to take it into Soca territory. The djembe drops the one, leaving the kick to fill that gap. But the acoustic guitars have that RnB feel, as does the slowly moving bass. Gio’s love of strings is shown again, but curiously only for a few, fleeting bars – but it’s a cleverly used device by him, as it fills out the sound at a crucial time in the lyrical narrative. The backing vocal arrangement is well constructed, projecting behind Gio at certain points which serves to raise up his main vocal. And what a vocal it is – having the feel of a ‘one take’ performance, as he clearly improvises across registers and ‘runs the changes’ perfectly. But it’s his delivery which truly impresses, giving an impassioned performance which encapsulates the paradox of the title.

The EP finishes with Conspiracy Theory. It’s clearly Afrobeats/Dancehall inspired, given parts of the arrangement. But nothing is that straightforward with Gio – and he takes these genres and smashes their conventions completely. As witnessed across Emotional Tide, the string arrangement is inspired. It picks up part of a traditional Dancehall bass clave – ‘oneeeeee-twooo-three‘, and then draws out the ‘four-five-six’, giving the feel of the genre but evoking a slower pace. The drums are driving, with the snare hitting the offbeats between the two and the three and then dropping dead on the four, before riffing into the next bar. The hi-hats tinker continuously, the kick double-hits the first downbeat then the third and the whole arrangement has an Afrobeats feel about it. The bass is syncopated, the acoustic guitars do RnB strums and the whole thing is a frantic and relentless tour de force. Gio’s vocal, meanwhile, is perhaps his most skilled – barely stopping for breath as he switches effortlessly between vocal and another impressive singjay. Conspiracy Theory is an unrepentant raging against the dying of the light, and an utterly fitting conclusion to everything that’s come before it.

Gio has also created a project with a searing narrative throughout. He covers a multitude of issues and themes, all fitting perfectly under the banner of “emotional tide” and forming a well-constructed story.

Free’s discussion around being conscious in our often-horrific world, and how it emotionally and spirituality impacts you, is highly affecting to anyone who treads that path. This leads into Survival – with Gio lamenting the ‘hows’ of living under the system and Babylon and what you have to do to survive within it while maintaining spirituality and humbleness; Jah being the way. But its message, while somewhat assured, also shows Gio’s vulnerability and the creeping self-doubt many of us have. It’s perhaps the most moving of the EP’s tracks.

Choices, meanwhile, takes that theme of survival and moves it forward one step, with Gio delving deep into ideas around how you find the right path in this noxious world – and also the choices that could lead you to ultimate self-destruction. It poses broad questions about the life you live, the “blessings” you’ve been given – and maybe how many of us need to be thankful more than we are. It’s all the ‘signs of the times’ as Gio muses. And you’ve “got to be smart” when you make choices – otherwise a fall will soon follow.

I Love You, and its opposite number Love and Hatred, deal with the emotional and spiritual turbulence that relationships bring. Ego is a succinct and furious protest cry for us all to drop our egos. There’s a distinct difference between humble self-confidence and the utterly damaging notion of ‘self’ that the system encourages us to be completely obsessed over. “Egotistic energy will only steal your health”, as Gio rightly points out – and his lesson, that we need to think about our brothers and sisters, whether blood related or by species, is a most pertinent of messages right now.

The EP’s conclusion, Conspiracy Theory, is as lyrically unrepentant as it is musically. Gio goes in hard and fast on all the system’s wicked vices and ploys, those corrupt individuals who push its nefarious ways and the chaos at we are obviously surrounded by – but which many of us are often unconscious to. It’s a searing conclusion, using real-world events (mentions of Obama, Syria and the media) to drive home Gio’s devastating message.

Dan Gio Emotional Tide is a blunt yet humble, scorching yet deeply moving project from Gio. Musically it’s a deft and immensely clever piece of work – sweeping across genres, encompassing some delicate and wonderful instrumentation along the way. As a performer, Gio is revelatory – fully immersing himself and the listener in his unique and wholly expressive voice. And lyrically, it is furious and compassionate in equal measure. Whatever the musical tide washes up for the rest of the year, Dan Gio Emotional Tide will stand as one of the best EPs of 2020. Glorious. Dan Gio Emotional Tide review by Steve Topple (12th May 2020).