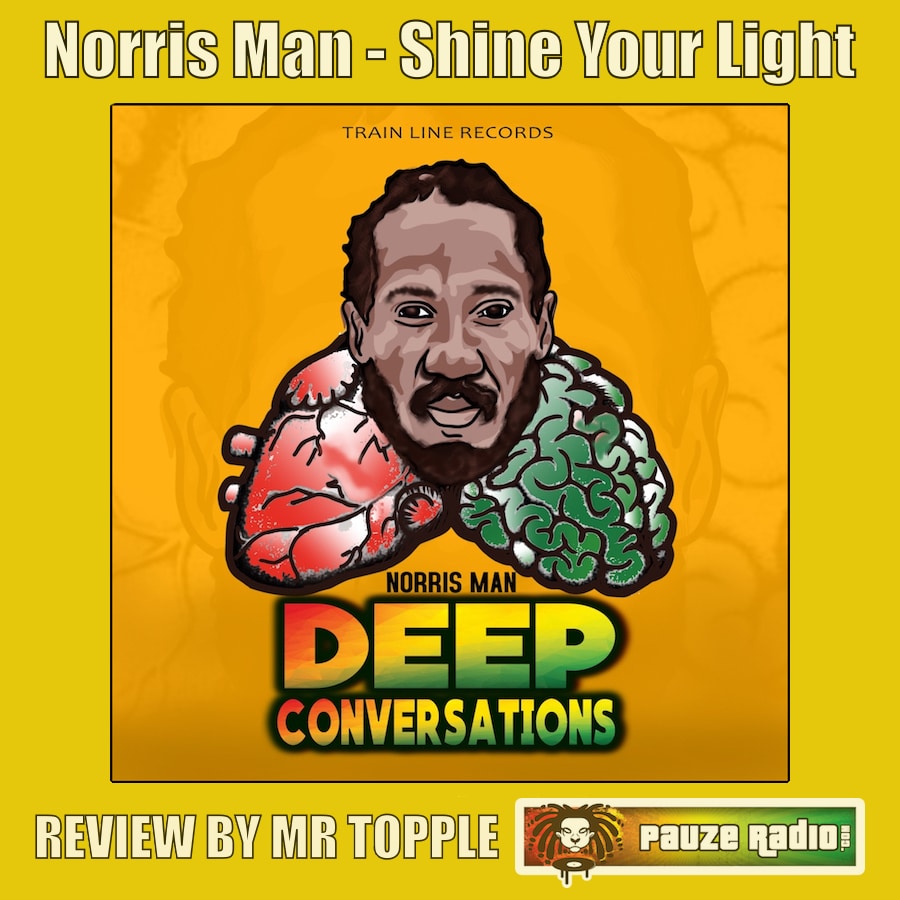 Ahead of the release of his forthcoming album Deep Conversations, Pauzeradio is humbled to take a look at one of the lead tracks from the release – and it’s a gorgeous offering.

Shine Your Light is from the Train Line Records-produced and released Deep Conversations, which is out on 20 May 2022. Production comes from founder Real Mckoy and there are three legendary musicians adding their talents to the track (and the album): Sam Gilly, Dean Fraser and Dave Richards. The overall engineering, mix and master are of a really high quality with a rich, rounded finish – allowing the main composition to shine.

It’s an overly Roots Reggae track with some traditional musical devices in play. Keys run a choppy bubble rhythm, sitting down the lower end of the treble and bass clefs – with occasional but pleasing syncopation at the end of certain phrases. The bass is interesting: rhythmically it avoids a drop-beat pattern (unlike a lot of Roots), but what it does do is generally work around arpeggio (broken) chords which takes the vibe back to a pre-Rocksteady time. Meanwhile, drums actually stray from a traditional one-drop, instead seeing the kick hit the one and three, while the snare focuses on the two and four and hi-hats fill the spaces in between. This gives Shine Your Light momentum and a sense of forward motion. Additional percussion, including blocks, bring added interest to proceedings.

Then, there are several guitar lines in play. One delicately skanks almost out of earshot (occasionally doing rapid-fire picks), while another involves itself at points with emotive riffs out of the left input. They feel slightly bluesy, as the sound has been dampened and rounded somewhat; the pitch is a mid-high register and there’s some nice glissandos, tremolo and bending throughout. Mckoy has also included some additional touches on the Roots-inspired arrangement too. Note the electric organ which switches between vibrato’d chords and some funky riffs via the right input. But Shine Your Light has even more to offer as well – from the G Funk whistle-like synth whining just out of earshot, to the impressive Gospel-like backing vocals which veer between straight harmonisation and call and response duties. Add in Norris Man on top, and the track is pure joy.

He’s commanding and forthright throughout this Roots-meets-Gospel/Soul affair. His main melody, especially across the chorus, has been constructed so as to instantly make it memorable. It means that Norris Man has to work up and down his tenor register extensively, as he swoops high then low. On the verses he concentrates his voice more up the higher end of his range – bringing some real elements of a Soul performance to the track: from the tight vocal glissandos to switching between legato and staccato notes; punctuating certain syllables for emphasis; delivering a controlled vibrato and also adding-in improvised riffs and runs aplenty. Lyrically, he’s created a purposefully joyful narrative, singing praises to Jah while also delivering a narrative about those proponents of Babylon who are determined to keeps the rest of us on the wrong path. It’s evocative and affecting, and well-executed.

Overall, Shine Your Light is a sterling offering from Norris Man and Train Line. Musically rich and detailed, it’s the perfect blend of Roots and Gospel/Soul with excellent attention to detail. Norris Man’s power hasn’t diminished over the years – and the track offers a glimpse as to the sheer quality and pleasure that’s to be found in the Deep Conversations album. Top-class effort all round.

Read the press release for the album here.