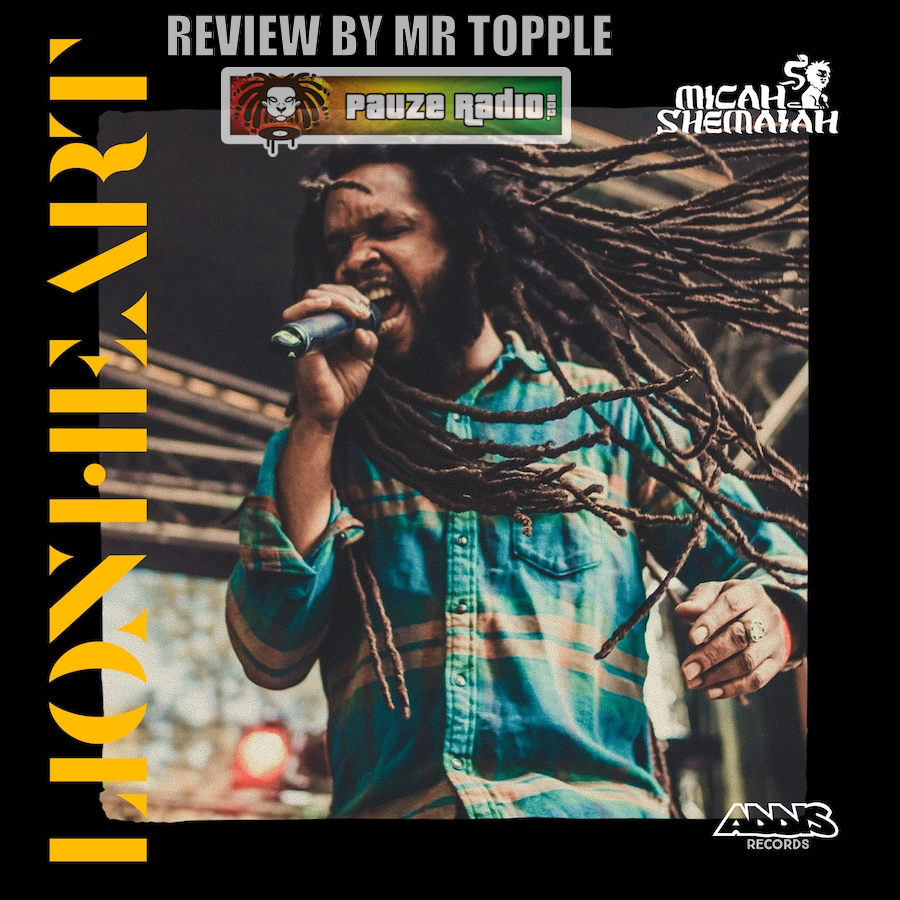 Micah Shemaiah had a strong 2020; not least with the superb Lion of Judah Riddim. Now, to open 2021 he’s back with a brand-new track. And it is a wholly powerful piece of work.

Micah Shemaiah Lion Heart, produced and released via the legendary Addis Records, is a perfect amalgamation of styles and genres, all cleverly weaved together to create a sound that is rich and poignant. Shemaiah has done a sterling job of combining some detailed intricacies with more accessible elements – making Lion Heart a pertinent piece.

Roots is the overriding stylistic force behind the track. But this is mainly due to one element: the keys. Running a bubble rhythm, it immediately transports you to a Roots vibe. But their use is markedly diverse. At times, they are present; at others not, and on occasions the engineering smears them with reverb and decay, shooting them off into the background. The sound is quite high-passed, too – with a tinny timbre that creates starkness. The reverb and decay across them are endemic of Dub – another genre represented throughout. For example, the musical breaks are pointed, often stripping the track back to just the vocal, or vocal and bass, or drums and bass.

The latter, meanwhile, is interesting. It has the timbre of Dub, in terms of the bass amp right down almost creating a perfect sine wave (that deep, clean sound). The bass sounds fingered, not picked, giving a smoother feel to the performance. Melodically, it’s not out of Dub character either – working around a repetitive motif that starts briefly on the fifth but then goes straight into the root and runs down from there – occasionally jumping up an octave, too. But rhythmically, it’s more interesting – avoiding the usual drop-beat rhythm and instead generally opting for a semiquaver start at the end of the bar, then two beats worth of semiquavers (four per beat) followed by another two then a quaver, then a dotted crotchet bridged with a semiquaver – before the pattern starts again. This rapid-fire arrangement gives Lion Heart its momentum, and also accentuates the breaks well.

But then, bring in the main drums and we move into a more Hip Hop feel. Juxtaposed with the bass, they are infinitely laid back. Hi-hats marry with the keys’ bubble rhythm and the snare hits the two and four, with additional brush strokes interspersed throughout. But crucially, the kick avoids the usual one drop arrangement, instead sounding like it actually hits every beat. So, while rhythmically the drums are slow, the rhythmic arrangement creates an unsettling feel to the track – complimenting the driving bass well. Electric guitars take a backseat on Lion Heart – skanking with the occasional riff just out of ear shot. And overall, the rhythm section as a sum of its parts creates a sound which is both unnerving and unrelenting – allowing the additional instrumentation to shine through, well.

The use of a heavily vibrato’d electric organ has been done sympathetically – barely noticeable throughout, it suddenly comes into its own just and the end of the track. The horns are wholly ambiguous – sometimes feeling more Roots, with their responses to Shemaiah’s calls, then a bit Soul with their solo riffs, and at other points verging on the more traditional African with the rapid, regal runs. This means they play along with the additional instrumentation, notably djembe (or similar), which rapidly flutter at points and what sounds like a synth balafon tinkering in the background. These nods to the Motherland accentuate the thematic content of the track well. And just to surprise you even more, there are some very Synthwave synth horns included at points across the track – creating an almost throwback, dystopian vibe which serves to bring an added dimension to the already haunting proceedings.

It also should be noted that the overall arrangement is highly smart. The Dub breaks have been cleverly utilised to represent the different genres in play. So, Lion Heart goes from feeling like a slow, brooding Hip Hop cut, to a pensive Roots track via a funky Dub groove and then back again. Overall, the entire composition is exceptionally well thought through and executed – allowing Shemaiah to then embellish it further.

He is the master of using understatement to push a narrative forward. His performance utilises his pleasing melodic range well, varying between his low and mid-high tenor range. Throughout, he tends to extend the notes as opposed to clipping them – giving smoothness versus the more urgent bass line. But it’s his use of tone and dynamics which is particularly impressive. Shemaiah keeps the choruses reserved, almost to a whisper at points, as he does across many of the verses. But at times, he then breaks out, utilising crescendo to build to a rousing point, before drawing himself back in again. And just occasionally, he drops his vocal immediately in forte – a veritable ‘lion’s roar’, which is matched with an actual sample of one. It’s an extremely intuitive performance, as his softer vocal paradoxically is the opposite of the more unsettling and haunting music – and it works. But moreover, both these match the lyrical content too: Shemaiah’s delicate, thoughtful performance evoking the humble Rastafari brothers and sisters he sings praises too; the music representing the nefarious, toxic Babylon that places obstacles, challenges and often misery in all of our ways. Brilliant, on all accounts.

Lion Heart is an extremely compelling piece from Shemaiah and Addis. It is so cleverly constructed, almost to the point of inspired – with it’s mix of genres, their utilisation and then the interplay between the music, Shemaiah’s vocal and the lyrics. The overall production, engineering and mastering are first class; the man himself is on top form and the whole thing is moving, detailed and thoroughly listenable even on repeat. Quite remarkable.