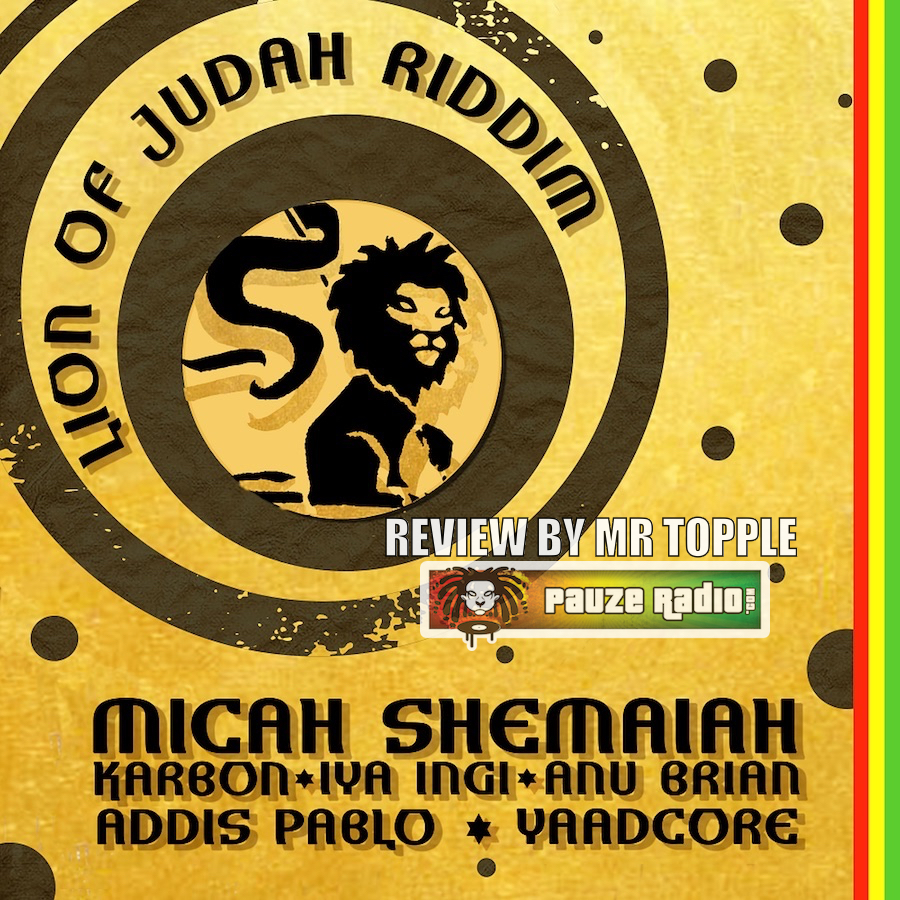 It’s undeniable that Micah Shemaiah is one of the most inspiring and insightful artists to emerge from the Roots movement in recent history. Now, he’s back with a selection of other, equally talented musicians across a new riddim. And it really does roar.

Lion of Judah Riddim, released via WeGeneration Music, sees Shemaiah at the peak of his powers. The host of artists have done impressive jobs on their individual interpretations. But central to this is Shemaiah’s brooding and affecting riddim – which is classic yet inventive in equal measure.

It opens with some stark and staccato RnB acoustic guitar chords, strummed effectively by Girma Davis with the slightest touch of reverb. A sampled lion then roars, before the track begins proper – and it’s a rich and intricate affair, drawing on elements of Roots but also RnB.

The bass is full of momentum, avoiding the usual device of dropping a beat. Instead, it works consistently across dotted rhythms and melodically around the diatonic scale, often up and down three tones from the tonic. It’s rich and rounded but at times drops away entirely. This instrumental pause for a deep breath exists across the fourth bar of each phrase, but also across the beginning and mid-points of the second verse, where it’s entirely absent. It works very well, honing the ear further in on the vocal line.

Percussion-wise and the drums lead the charge across Lion of Judah Riddim. They avoid the usual one drop; nodding to the more RnB/Soul influences seen in other areas. The kick directly hits the one and then the offbeat after the three, then the four. The snare focuses on the two and four, while hi-hats run dotted rhythms in the spaces in between. This more driving, urgent arrangement works well against the stuttering Roots devices used elsewhere. Additional percussive lines include a washboard snarling in and out on occasion and fleeting rim clicks on the snare.

Those acoustic guitars run a skank for the majority of the time, with strummed chords on other occasions. This stuttering feel is then enhanced by an electric organ, running a doubled-up bubble rhythm (almost an offbeat skank) which is built slowly in – starting just on one chord per bar. Again, like the guitars the focus her is on short, staccato notes. But also like the bass, the organ breaks away at certain points, creating yet another musical breath. Additional, peaking and troughing decay has also been added, as has a touch of Dub rhythmic and elongated reverb at points. A straight piano also splay a role – but it’s almost unnoticeable until right at the end, where its skank rhythm is performed wide-open, with just the electric organ as a counterpart.

There’s also a glorious synth horn line. Somewhat compressed and dampened, they generally run crotchet notes on the chorus, with a dotted note riff at the end – again more RnB than Roots. The inclusion of an actual horn line that runs a countermelody is a genius move, as it juxtaposed well with its almost string-sounding synth cousins.

Offering an additional countermelody is a melodica. At points, it uses the same melodic motif as the horns – but at others strays off into a rapidly running world of its own. It’s full of attractive crescendo and decrescendo and nice use of vibrato – and adds a wonderful retrospective feel to the riddim. Overall, Lion of Judah Riddim is a highly intricate, expertly arranged and constructed affair – showcasing Shemaiah’s infinite skill as a musician (he performed the majority of the live instrumentation), composer but also producer. The quality of the engineering is first rate – and Shemaiah’s own vocal interpretation of the riddim finishes of his display of talents.

He is full of expressive Soul-like quality throughout. His voice is gritty yet precise – soaring across a mid-to-upper tenor range, but at times with the timbre of a baritone. His use of vibrato is pointed; the mixing of more singjay-style rhythmic interpretation on the verses is juxtaposed well with the smoother, more elegant Soul-led choruses. He also employs varying dynamics to good effect – moving down to almost a whisper at points, before bringing the vocal back up to a veritable roar. And lyrically, Shemaiah is on-point as always, as he discusses personal and spiritual faith, and the humble self-confidence, we all need in the face of Babylon’s “slaughter”. Pitch-perfect, glorious yet haunting:

Yaadcore comes on board, with Nyquil (Spliff a Light Spliff). His voice is different to Shemaiah’s – moving more towards traditional Roots and away from Soul. Effectively a vocal-led singjay, his performance is smooth and fluid, avoiding over-use of short, clipped notation – instead elongating his notes. Rhythmically he works around one main motif, and then embellishes it further. But then Yaadcore suddenly delivers this fabulous falsetto from nowhere – delicate, airy and soaring across a high register – it’s surprising and effective. His lyrical content, about the ongoing criminalisation of cannabis and how it’s endemic of the problems under Babylon, is pertinent – and overall, Yaadcore delivers in droves:

Anu Bryan (formerly Bryan Gold) interprets the Lion of Judah Riddim with his contribution, Fly Anu. He has a gorgeous, expressive voice – slightly gravelly, but with a crystalline delivery that flips between a tenor and falsetto extremely well. Rhythmically, he works around traditional Roots dotted notation. But his melodic delivery, full of intricate runs and glissandos between notes across the same syllable, is all very Soul. The complex backing vocals, containing multiple harmonic lines and call and response/vowel sounds are wonderful. And Bryan’s riffing and improv is glorious. He’s honed in well on the more soulful elements of Lion of Judah Riddim – and brought them to the fore expertly.

Iration Balance comes from Iya Ingi. Here, the riddim goes full circle to a vocal performance which wouldn’t feel out of place on something from the Revival movement. Ingi treads that fine line between vocal, singjay and almost rapping extremely well. He flips between a straighter, almost chanty singjay, then into a smooth, soulful vocal before flipping again into a forthright, imposing, growling singjay which borders on a rap. Ingi also goes between a tenor and falsetto effortlessly. It’s a pleasure to listen to such a versatile artist demonstrates all his prowess in one track. And the message, discussing how Jah created everything in perfect balance, is pertinent given how Babylon is determined to rip this ‘iration balance’ apart. Stirring works.

Lions Roar sees Karbon give us his interpretation. And it’s different again to the previous artists’ ones. He takes us slightly further back in time, delivering a more traditional performance that almost sits somewhere between Mento and Nyabinghi in its chant-like, sermonic construction. Existing in a high tenor register, his purposeful and impactful rhythmic winding along with precise enunciation has created a moving performance; one that during which Karbon demonstrates intuitive restraint, allowing the lyrics to truly speak. “What will we hand down for posterity?” is such an effective line, too – as he gives us a narrative on the direction that we should be taking as a species and planet, versus where we are clearly headed under Babylon. Powerful and beautifully executed.

The Lion of Judah Riddim EP also gives us Addis Pablo’s Singing Lion. It’s a full, melodica solo piece from him – displaying just how good the instrument can be, when in the right pair of hands. Pablo uses the melodica almost as a voice. Qualities such as switching between staccato notes and longer, legato ones are here. The use of crescendo and decrescendo is pointed and phrased very well. Vibrato purrs in and out. And his melodic line is extremely well-placed with the track, focusing on the diatonic scale but with the briefest of Jazzy, upwards glissandos. It’s a glorious inclusion to the riddim, and shows just why Roots is such a powerful genre – as you don’t have to have a voice to convey a message of personal and spiritual strength and hope:

Lion of Judah riddim EP is another stellar release from Shemaiah. Musically intricate and expertly arranged, it’s brimming with passion, Roots and Soul, and is a colourful palette for the artists to bounce off. Each compliments the composition very well, providing varying interpretations that all deliver strong messages. And the finished product is a complex yet accessible body of work. Utterly gorgeous.