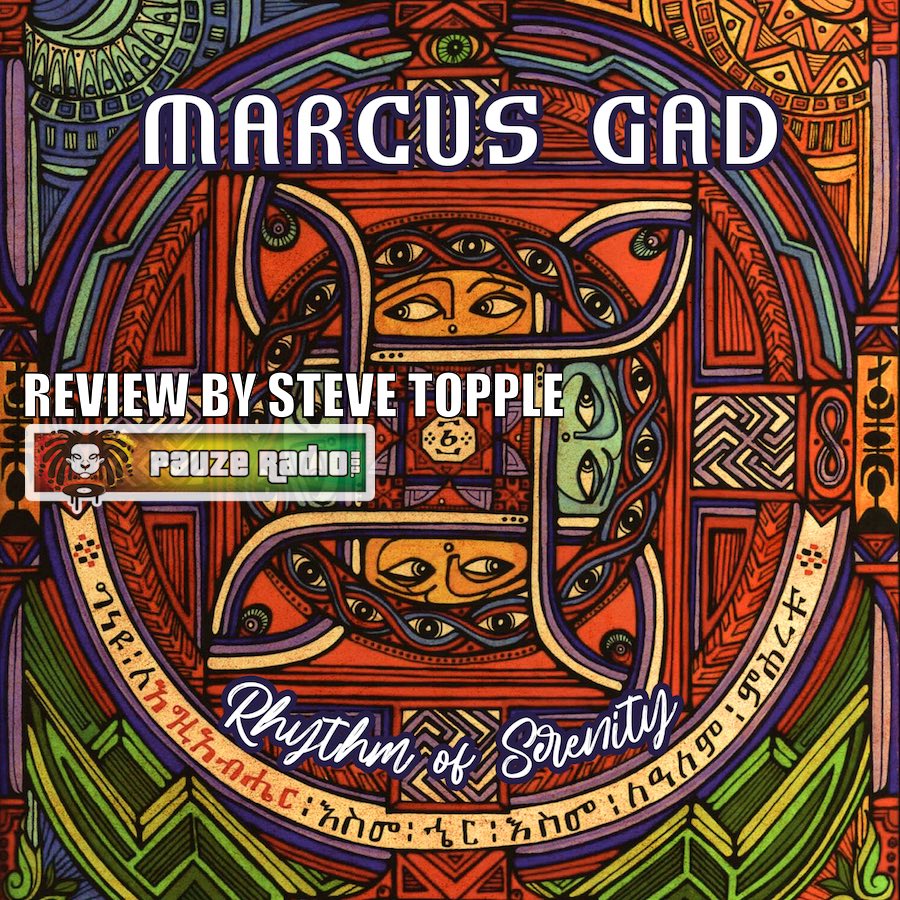 Marcus Gad is still young by anyone’s standards. But he’s already notched up a fairly sizeable artistic career. And with his latest album out on 13th March, it seems that this thriving talent from New Caledonia isn’t slowing down anytime soon.

Marcus Gad Rhythm of Serenity, released via Lustre Kings Productions and Baco Records, is a powerhouse of a record, both musically and thematically. The extremely potent production comes from Zion I Kings, most notably Andrew ‘Moon’ Bain. And this level of quality cements Rhythm of Serenity’s stellar status. Because not only is it musically delicious, but Gad has produced a wonderfully constructed project: taking you on a journey with Gad’s and the listener’s present as the starting point, and filling in many points on his (and hopefully our) journey.

The album opens with Rebel Form of Soul. It harks back to the golden age of Roots. The simple, yet classy and well-executed arrangement sees the track stripped back to Roots’ bare roots. The keys are on a traditional bubble rhythm, while the guitars perform a mixture of a skank intersected with some funkier riffing. A pared-back percussive line sees a kick doing a one drop, while there is occasional Dub reverb used on the guitars. The syncopated but riffing bass is prominent, driving the track forwards.

But it’s the horn section which brings most pleasure. It’s always a joy to hear a live brass section, but Rebel Form of Soul’s is particularly impressive. They serve as a second vocal line, almost performing a call and response duty; full of light, shade, expressive dynamics and intonation. And Gad completes this attractive musical canvas with a strong vocal opener. He effortlessly glides between a clipped, pointed singjay and a smooth, expressive tenor with a panache for slick runs and tonal leaping and diving. And the theme, about the ‘hows’ and ‘whys’ of those of us who are life’s conscious rebels sets the scene for the rest of the album. Lovely stuff.

Next, and Marcus Gad Rhythm of Serenity moves into slightly more brooding territory with Take Some Time. And with that move comes a change in musical direction. Gone is the stripped back composition. In its place takes a heady mix of Marley-esque Roots, Dub and some interesting nods to Soul. Roots sensibilities are all present: skanking guitars, a more embellished one drop and a Rocksteady-like bass. But Gad ups the dubbiness, by literally upping the reverb, and also with some well-positioned breaks. Once again, those fresh-sounding horns perform sterling work. But it’s the keys and electric guitars which are of particular interest on Take Some Time. The former goes way beyond a bubble rhythm, performing tripleted then offbeat, all treble clef chords across the main orchestration. These are then repeated an octave lower. This moves the track out of pure Roots into a more RnB-laced vibe. The haunting, whining electric guitars have a distinct Funky Soul feel. And the brief inclusion of a Hammond organ just adds to this. All in all, a cleverly crafted, smoothly executed track.

Become a Nation is back to Roots, with the addition of a melodica to really take us back to the old skool. But again, it’s not ‘straight’ Roots. The melody, which works up and down from the third of the root chord has a far more RnB feel about it. This coupled with the chord progressions, rising up and down, major to minor, from the root, smooths the track out and away from straight Roots. Gad’s glossy, lilting vocal compliments this, and while its musical grounding is clear, the overall ‘feel’ of Become a Nation is far more ambiguous. But Gad’s oozingly positive message is clear and well presented: how we can, and need to, come together as a species to form a borderless, single ‘nation’. Powerful works.

Following this hybrid is Pouvoir, which is overtly more Roots with those horns making another prominent return. It swaggers along, thanks to those horns, some prominent skanking and a particularly beamed and syncopated bass. But Gad’s love of the electric guitar is clear, as they return with their funky, whining riffs. The next track, Overcome, is also in this vein, but there is more of a focus on the percussive line, here. A djembe (or similar) is put to good use, tinkering in the background but in earshot enough to bring a distinct feel of the Motherland. Some well placed reverb on the keys and the appearance of a Hammond organ again add additional dimensions to this solid track. And yes – those electric guitars are doing their thing, once more.

The title track is a curious creation from Gad and Bain. The most striking thing from the off is the track is paradoxically in a minor key; thematically at odds with the use of ‘serenity’. But musically, it is actually very serene. While all the essentials of Roots are there again (plus those electric guitars), Gad takes the semantics from the title and musically expands on this. Strings are brought in for the first time, albeit sparingly, stretched across breves. A synth organ’s instrumental line focuses on the downbeats, being at musical odds with the Roots devices. But its inclusion builds on the theme of serenity, which is again enhanced by the use of a tight reverb across Gad’s vocal line. The stripped back and unfussy bass line also slows the track down and enhances the flow, reducing the natural staccato and bop that Roots tracks generally have. Choral-like backing vocals also enhance the tranquillity. So, while Rhythm of Serenity is a curious creation, it is also fascinating in equal measure.

Inl Royal almost expands on where Rhythm of Serenity left off; helped in no small way by the sublime Blakkamoore. The notion, both musical and thematic, of serenity is followed through to its logical conclusion in this intensely traditional African music-influenced track. You can barely call this Roots aside from a guitar skank; a closer description would be the broad World Music. The track is heavily bound by its percussive line, featuring a broad array of instruments. The bass is sparse; the electric guitars gently lilt and the use of synths, while nodding to more modern Afrobeats, is cleverly included so as to merge the old and the new perfectly. Meanwhile, Gad and Blakkamoore’s performance are sublime; treading a delicate line between traditional chant, more modern singjay and full-blown Soul. Both are complimented by the wordless backing vocals, which while heavily layered are focused just on sounds. All in all, a gorgeous inclusion in the album and it marks a shift in the narrative – as the album focuses on the ‘whys’ of Gad’s journey.

Oh Mama takes Rhythm of Serenity once again back to more traditional Roots, albeit with some Dub elements included. But again, the genius of Gad is the composition. Those Soul influences are once more present in the chord progressions, melody and complex harmony formation, and the horns once again are glorious – with their delicately placed calls and responses.

Cane and Cotton is more straight-up, slightly frantic Roots, but with some sublime Dub effects splurged into the mix. The keys are more syncopated in places, though, and the drum line is embellished, with riffs and rolls above the standard one drop. And the thematic content is an abject education in colonialism and the African diaspora. Meanwhile, Honouring the Soil takes Cane and Cotton’s themes one step further, while musically it strips it back from Dubbiness to a smoother, more soulful sound. The two tracks also mark a shift in the narrative, moving the album from the ‘whys’ of how we got to where the world is today and onto the ‘what’ and ‘how’ we need to proceed, to realise full emancipation.

On Live Life, Gad goes full on Funky Soul with the opener, complete with electric and bass guitars performing an identical, beamed and offbeat riff, a Hammond organ shrilling in the background and the drums rolling in time with the guitars. But we’re then back to an enhanced Roots track. It’s a shining example of Bain’s perfectly pitched production, along with smart engineering and mastering from Laurent ‘Tippy I’ Alfred. Because, while on Roots the bass and bubble rhythm/skank are usually the driving forces, the production is such that you’re drawn more to Gad’s vocal and the other instrumentation. This lifts the track away from pure Roots into a more aurally intricate and rounded sound, swerving into Soul territory again. This level of skill on the post-record is present throughout Rhythm of Serenity.

Next up is Leggo Your Ego – a winding, strutting affair with multi-layered orchestration and an almost half-time but still stomping Ska feel. It’s Gad’s beamed vocal, plus the increased prominence of the bubble keys and upbeat percussion drops which create this. But the inclusion of a flute-like instrument and some Dub effects life the track once more out of the ‘ordinary’ into the ‘special’. And the unexpected, albeit brief, flip into a triple time key (blink and you’d miss it) is scrumptious.

The album concludes with Nature Like Scripture. The rainfall sound effects herald a change of tone on the final cut. The haunting melodica is back, adding to this extremely dubby Roots track. But Gad again goes somewhat further, almost nodding to the Revival movement in his use of synths and effects like an electronic theremin. It’s a purposeful, incessant track, driven heavily by the bass – which is perhaps a good reflector on the theme. In a fitting conclusion to the project, Gad has taken us full circle, from how, once we spiritually and socially emancipate ourselves, we need to do this in tandem with the Earth; all the more pertinent given the current climate crisis and ecological breakdown we face. This ‘whole’ message is the sum of the album’s parts. And Nature Like Scripture is a wholly appropriate end.

Gad’s voice impresses throughout. He is one of those remarkable Roots singers who sits as comfortably in singjay as he does in vocal; and as comfortably in Roots as he does in Soul. In another life, the latter could have easily been his home. Gad makes clever use of phrasing and syllable inflection, driving the lyrics home. And he also shows an impressive range throughout, which only serves to add dynamism to the album.

Marcus Gad Rhythm of Serenity is an extremely polished affair. Top-rate production, engineering and mastering finish off what is a musically deft project. The live musicians are of particular quality (not least the horns and percussionists). Also, the construction of the album as a narrative is extremely well-considered – to the point where it takes a few listens to ‘get’ where it’s coming from.

However, its Gad and Bain’s compositions which are truly inspired. The tendency for much of the Roots-derived music at present is to max-out the experimentation. Which, is invariably a positive thing. But Marcus Gad Rhythm of Serenity shows how a firm vision, with some attention to musical detail, can still impress. Marcus Gad Rhythm Of Serenity review by Steve Topple (12th March 2020).