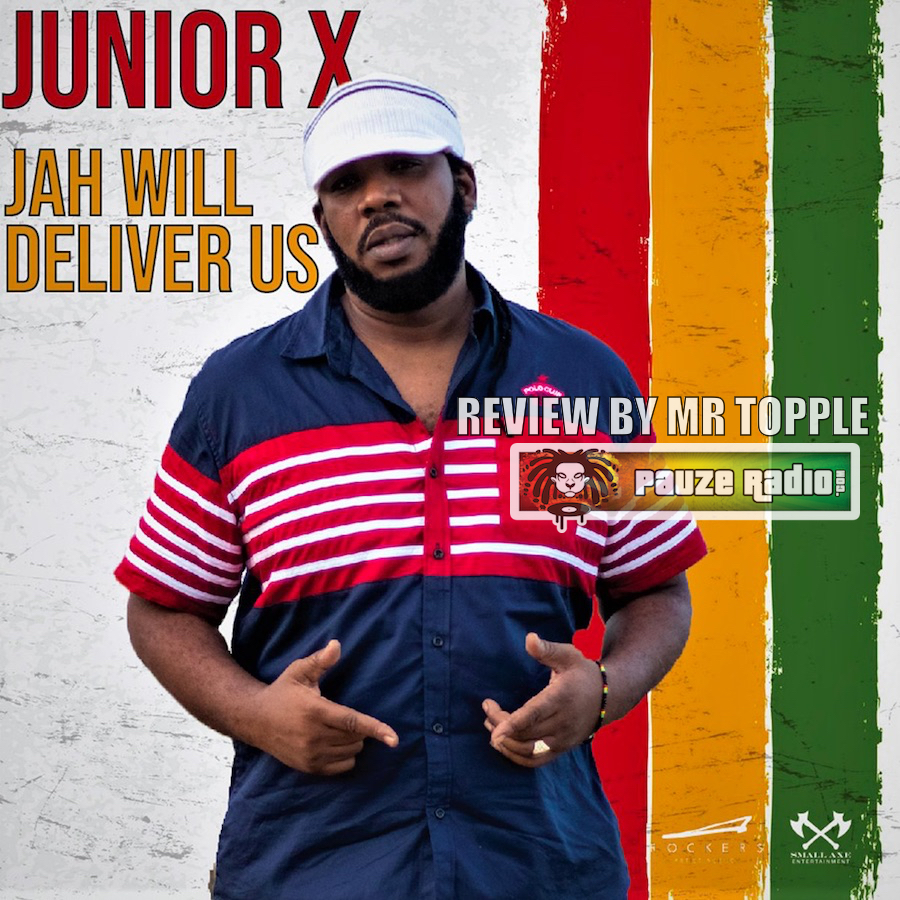 Junior X: Jah Will Deliver Us Single Review by Mr Topple for Pauzeradio.com.

Being a recording artist with several decades under his belt, Junior X is no stranger to releasing top-quality, inspirational music. But with his first release for a legendary label, he’s taken this to higher planes.

Junior X Jah Will Deliver Us, released via Rockers Agency, sees Junior X at the peak of his potent powers. Written by him and produced by Small Axe Productions across the previously-released Paradigm Shift Riddim, it’s a gorgeous, delicately-touched Roots affair with lovely inflections of Soul from Junior X throughout.

It opens with a clever use of choral voice synths, to create a gentle harmonic line – accompanied by some lilting guitars. But then Jah Will Deliver Us kicks in proper – and goes straight into Roots territory. Central to the track is the driving bass line. It works around a one drop rhythm, skipping beat one entirely before syncopating across the rest of the bar across diatonic melodies. What’s also of note is the nice use of a melodic motif on the chorus, where the bass line almost exactly mimics the vocal one. This adds depth to the sound, and also hones the ear on the lyrics.

Drums perform a somewhat embellished one drop across the track. The kick and the snare ubiquitously focus on the two and four, while hi-hats fill in the breathing space across quaver-led rhythms. But there’s pleasant, additional yet understated embellishment, with additional rolls across the drums at the end of the fourth bar of each phrase. Meanwhile, keys perform a stripped back bubble rhythm, driving that Roots vibe. The guitars continue throughout, performing a brief skank on the chorus, while working across elongated arpeggio chords on the verses.

The inclusion of a fleeting synth balafon (or similar, dampened xylophone sound), almost out of earshot, on the chorus is a lovely touch – like the bass, using a melodic motif. And the occasional inclusion of synth horns and some effective Dub-like samples finish off Jah Will Deliver Us’s lush arrangement perfectly. The melody is utterly infectious, and means that the track is lifted from just Roots to something extremely strong and affecting.

It should be noted that the engineering and mastering across the track is also excellent. It’s sound is rich, focusing on a perfect middle-place between higher and lower kHz to create a rich, fulsome sound which appropriately focuses on the bass and vocals as the central sound. And what a vocal from Junior X it is.

He is extremely impressive across Jah Will Deliver Us. His voice is highly rich and resonant, having the timbre of a baritone yet transcending the range of a middle tenor. Junior X’s enunciation is pitch-perfect, making intelligent use of long and short notes to fit with the syllable patterns. Rhythmically, he uses deft pace-building as the track progresses – employing more complex and rapid rhythmic patterns to create a crescendo to the wonderfully stripped-back and affecting bridge, before sailing across the song’s conclusion. Melodically he performs like a Soul singer – performing gorgeous riffs and vocals runs with ease. There’s even several delicious growls at points.

But moreover, Junior X has produced something lyrically which is searing and compelling. What’s so smart about his words is that they will engage numerous audiences; for example as he laments the cost of education by saying “graduate from university with student loan to pay”. It’s an effective dissemination of, as he says, “the system they create is to keeping us slaving, working, building their economy”. And the message, about how despite being under pressure our faith needs and must prevail along with the comfort that deliverance will happen, is especially strong given our species’ and society’s current chaos.

Jah Will Deliver Us is beautiful. Cleverly, delicately and sympathetically arranged and produced by Small Axe, it’s melodic line lingers with you as do Junior X’s heartfelt and engaging performance, and his powerful and hopeful lyrics. Superb and moving work from all involved.