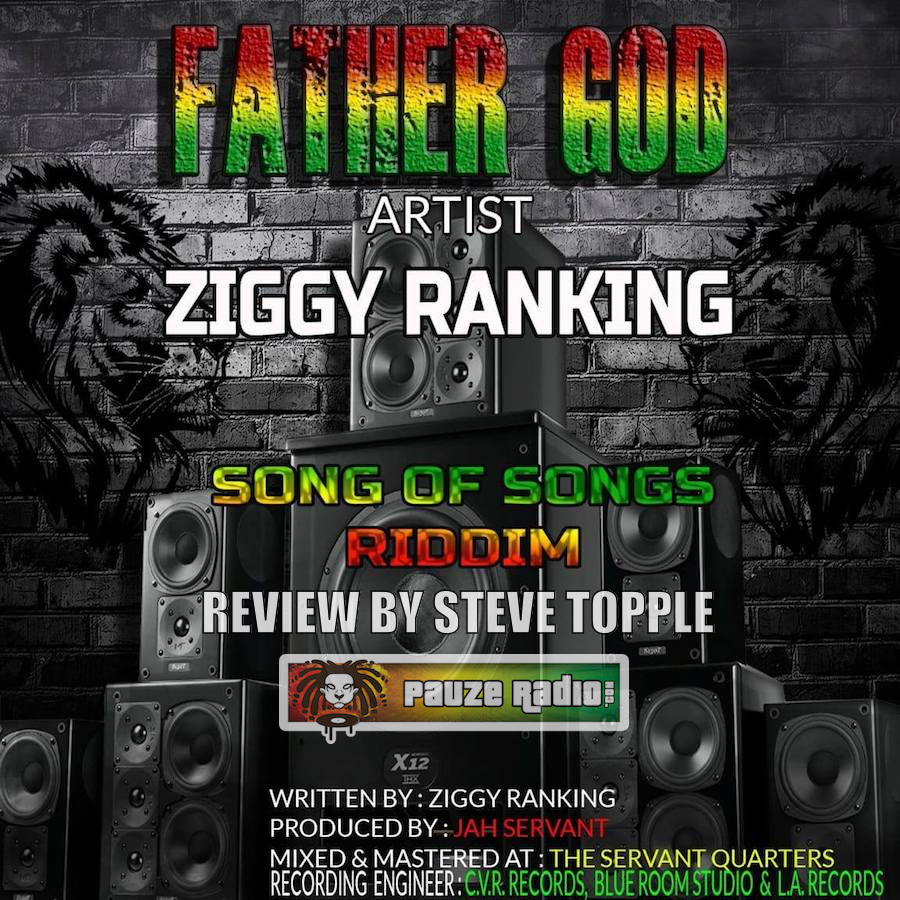 Trinidad’s finest Ziggy Ranking has just released another fresh cut. In a time of global crisis, he has a message for many of us. And while it’s overly spiritual, it should resonate regardless of your faith.

Father God, produced by Canadian music producer and dubologist Jah Servant, is a forthright, brooding and purposeful affair. It pulls no musical or lyrical punches, and dresses up neither – showing Ranking at his most commanding. Overly Roots and Dub-led, the track is cleverly composed and arranged to make sure Ranking’s voice and message take centre stage.

The track opens with a purposeful ensemble intro across the keys, electric guitars, melodica and drums – all metaphorically chanting the same, beamed, almost regal rhythm. But we’re then straight into Roots territory, as Father God kicks in proper.

All the traditional Roots devices are emphatically present: keys tread a bubble rhythm; the drums are on a one drop with the kick accenting the upbeats, and the melodica runs a counter-rhythm to the main melody. But while the musical devices are Roots, the arrangement leans more towards Dub.

The Roots stall is set out in the first few bars. But it soon deviates from this, with the opening chorus coming from a distinctly Dub place. The instrumentation breaks from the off, leaving at first just Ranking’s voice and the bass, on a fairly syncopated riff. Then the bass drops off, leaving occasionally fluttering electric guitars and the odd drum crash. This leads into the first verse, which starts with the bass and drums, with the melodica then coming in. Then, the chorus is repeated with all instrumentation present.

This stripping back then increased layering of instruments is repeated throughout Father God. It builds to the third verse, which is the most heavily scored, before a bridge where the electric guitars break out into harmonic improvisation. Then, we’re back to a stripped back chorus and fourth verse. Throughout, reverb is heavily used as are traditional Dub sound effects.

The arrangement seems intentionally focused to draw your attention to where Ranking wants it to be. The verses are short, just eight bars, which hones the listener in on the chorus’s memorable melody and its message. Moreover, the centring of the track’s chorus around the root and then the flat seventh just adds to this veritable signposting.

Meanwhile, the production and engineering have left Ranking’s vocal as the stand-alone feature, with the dB on all other lines being fine-tuned downwards accordingly. However hard you try you cannot escape his voice. And what a voice it is.

He’s as powerful as he was a decade ago. Gravelly yet rich, urgent yet mesmerising, Ranking is a supreme vocal talent. He delivers his message with passion, and a huge dollop of Soul as well. His vocal runs and riffs are a joy, and his use of dynamics hammers his message home. His range is as expansive as ever. And the message is pertinent: how so many of us have lost direction in life; how the current coronavirus crisis has exposed this and how many of us will be desperately searching for answers and succour.

Father God is another commendable track from the ever-impressive Ranking. Searing, powerful and yet not too preachy, it’s a strong addition to the current swathe of music trying to provide humanity with answers during this time of universal chaos.