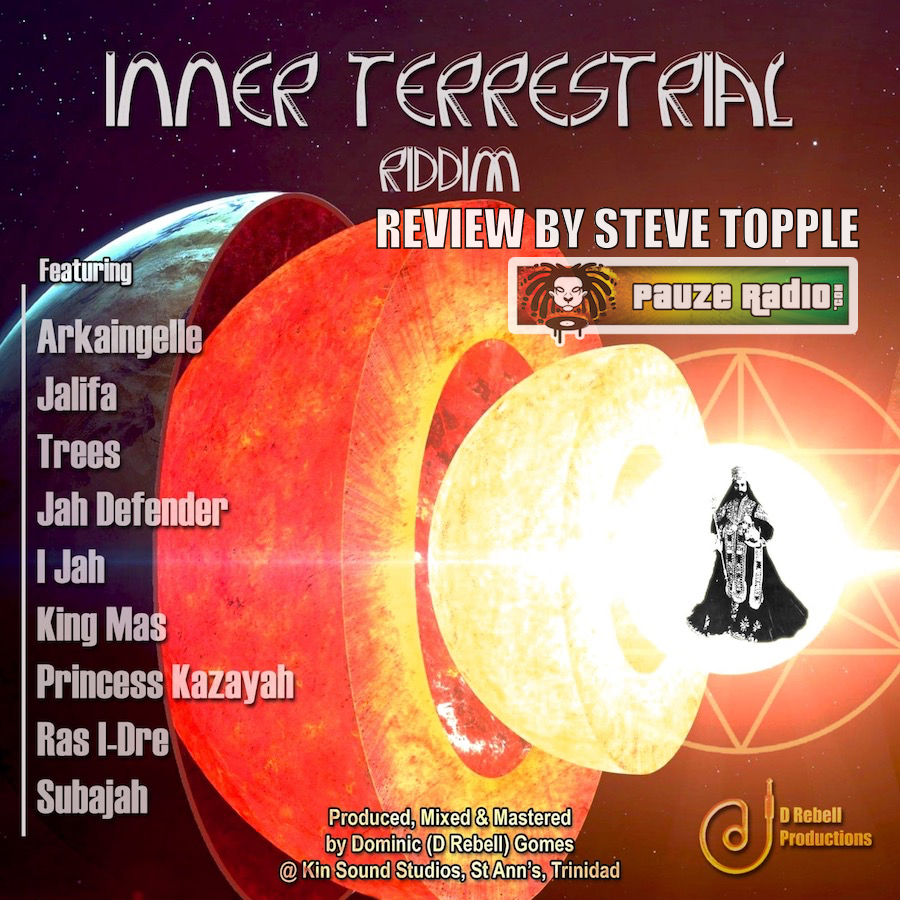 2020 has had a promising start for riddims, with cuts from the likes of Seani B and Bost & Bim showing that, with some real technical skill and a bit of magic, the art is still alive and kicking. And the latest release from D Rebell is kicking – and very much alive.

Inner Terrestrial Riddim, released by D Rebell Productions, is a synth-heavy, post-modern Roots affair. The seven interpretations by different artists all come with their own merits. But the basic instrumental riddim itself is quite an interesting piece of work.

It starts off with a basic drum roll, then a synth organ doing a three-beat riff preceding, and on, the upbeats. This signals the Roots territory Inner Terrestrial Riddim quickly moves into. Electric guitars skank and the bass performs a riff, purposefully avoiding the first beat of each bar (a line that is at times echoed by the guitars). But the absence of a straight one drop is noticeable. While the focus is on the second and fourth beats, the kick is almost non-existent. This makes the riddim lighter and with more breathing space for the other instrumental lines.

The synth-heavy affair lends itself well to its messed-with namesake; almost being slightly ‘ET’ and otherworldly. Technical variations on keys are the main focus, with varying amounts of reverb and variations on hi-and-low pass filters. But to lose the ‘E’ from the ‘terrestrial’ part, D Rebell has incorporated elements of traditional African percussion including djembe. This incorporates the “Inner”, and hence we have the title being the sum of its parts. Of note is that the riddim is a composition in itself, versus the more standard four, eight or 12-bar sequences; the main variations being the syncopated, harmonic improvisation of the synth lines and the breaks in the percussion. Overall, this mix of the ‘old’ and the ‘new’ with constant variation is an impressive, and thematically intelligent, composition.

It’s a finely produced riddim which gives plenty of scope for unique takes on its basic structure. So, the majority of the artists’ interpretations centre around the notions of spirituality and the Motherland. Each bring their own unique musical and thematic mix onboard.

The first act to work with Inner Terrestrial Riddim is Arkaingelle with his cut Rejoice. The basic riddim has barely been deviated from, except for the inclusion of a vocal-like melodica with serves as a solo bridge. Arkaingelle’s performance encapsulates the essence of the riddim. Stripped back and almost Mento in its chant-come-vocal, his use of phrasing and intonation gives the feeling the cut is raw and recorded almost as live. The exception to this is the simply-layered backing vocals, generally working a third or fifth above the main melody. This again plays to the riddims purpose, and the whole track is stripped-back perfection, singing praise to Jah.

Next up is Jalifa with Ibration. It stands in contrast to Rejoice. Again, no real movement on the basic riddim is present, except the introduction of a heavily syncopated steel pan in the latter half. The vocal lines are heavily layered, with the main melodic melody being strung out and smoothed. The level of multiple lines in the vocal arrangement hints at more traditional African music. But then Jalifa does an amazing juxtaposition in the verses, taking us into a frantic, energetic singjay. She spits at an impressive rate, delivering crystal clear enunciation with a pleasing amount of rhythmic variation. The ‘old’ and the ‘new’ of the riddim are both incorporated in Jalifa’s cut. Impressive.

P-Trees gives us Couples Therapy. Her vocal is gorgeous, and puts you in mind of Lila Iké’s soft, sensual yet skilled voice. She effortlessly glides across ranges, covering over two octaves without falter. Impressive vocal runs are extremely well-executed while in a head voice – not a mean feat for any singer to pull off. P-Trees also makes use of an expressive vibrato, controlling the reverberations so as to induce them at just the right point in the note. Moreover, the juxtaposition between the vertical and horizontal embouchure brings enthralling variation to her pronunciation and phrasing. P-Trees also uses a colourful palette of rhythms throughout the track. She is a natural vocalist who it would be exciting to see more of. And the subject matter is on-point: about how a loving relationship should be centred around spirituality. Overall, a scintillating interpretation from P-Trees.

Cornerstone from Jah Defender is a cautious tale of the nefarious nature of Babylon and the system. But it also serves as a call of ‘enough is enough’, and how we all have the power to change with Rastafari being the key. Jah Defender delivers a pleasing, Roots-led performance. His voice sits somewhere between more traditional Reggae and almost Neo Soul. The former is shown in the beamed, dotted note rhythmic phrasing. But the latter comes through with his vocal gymnastics, the light and shade of his vocal dynamics and the filling of the semitones between notes. Powerful works from Jah Defender.

Following Jah Defender is I-Jah with So Wicked, a full-on old skool Roots track which for my money even draws on Mento. This is because I-Jah utilises Spoken Word on the verses, almost delivering a sermon through the riddim. It makes So Wicked stand out from the rest of the cuts, channelling the ‘old’ of D-Rebell’s composition. Lyrically, it also one of the stand-out tracks, with I-Jah making full use of his poetic abilities. As he ponders: “Like the flow and force of a volcano eruption, population reduction, global destruction. Psychological torture in the food and the water, to reshift the balance of the natural order”. Powerful yet sublime.

The incredible King MAS joins forces with Princess Kazayah and Ras I-Dre on Chant. MAS’s 2019 album Crown was one of the finest of the year, and this interpretation of the riddim does not disappoint. Firstly, MAS takes the riddim further, mixing up the opening few bars and then including the same steel pan solo as Jalifa at the end. And it goes without saying that his, Kazayah and I-Dre’s performances are superb. But it’s what MAS has done with the melodic composition and vocal arrangement on top of D-Rebell’s riddim which probably makes it the stand out interpretation of the set.

MAS is such an intuitive musician that the main chorus’ melody almost feels like the riddim was written for it; not the other way around. The stretching out of the first note of the bar leaves air for the triple time bass riff to be prominent. Then, the melody briefly mimics the bass’ rhythm before complimenting its syncopation in the final part of the phrase. This makes Chant’s chorus an infectious groove.

The intervening verses from him and Kazayah are beautifully arranged, will MAS and her taking the lead on one each. He shows off his tenor/falsetto flipping and she riffs and runs across an impressive head/chest range. Call and response arrangements are heavily used, in keeping with the ‘old’ of the riddim. Then, Ras I-Dre’s bridge is an absolute delight, with MAS and Kazayah giving call and responses to his main line, including well-placed semitone-to-tone slides which bring some Soul to proceedings. The whole experience is so well crafted, so well executed and so infectious. It is without doubt the best cut on the riddim.

Subajah finishes the interpretations with his cut Ancient Song. Like MAS, he has embellished the main riddim with some impressive vocal arrangements. And his Neo Soul approach to the performance is delicious. As with Arkaingelle, Subajah’s cut feels like a ‘one-take’ recording, as he intuitively phrases and intonates with the potent, and at times moving, lyrics. But his cut is far more of the ‘new’ of the riddim, with the almost improvised melodies and intricate runs and riffs. It’s a fitting end to the riddim, balancing a modern musical approach with ‘ancient’ spiritual traditions.

The album closes with a Dub version from D Rebell and Arkaingelle.

Overall, Inner Terrestrial Riddim is an impressive cut from D-Rebell. And the artists’ interpretations are equally impressive. All bring unique vocal elements that are in contrast to each other. But the bar is being set high on riddims, now – with acts often not only providing vocal performances but also changing the main composition, as well. So, it seems like a wasted opportunity that some of the artists didn’t bring much else but their voice and lyrics to the table. But the exceptions, like Jalifa, P-Trees and MAS and Co. more than make up for the lack of creative finesse in other areas. And as riddims go, it’s a thematically inspired and cleverly constructed addition to 2020’s growing roster. Inner Terrestrial Riddim review by Steve Topple (8th March 2020).