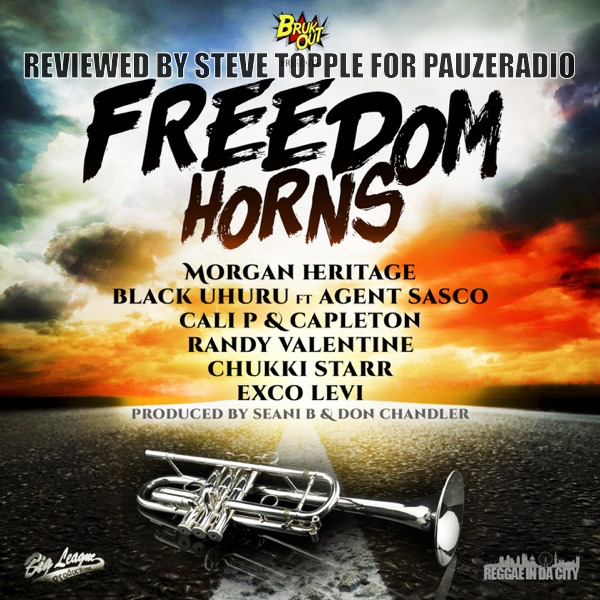 The ‘old ones are the best’, allegedly. Not always the case, maybe – and five, short years is hardly ancient. But one of the most recognisable riddims of the 2010’s has just got a fresh outing. And the result is a delicious expansion on a classic.

Freedom Horns Riddim, released by Bruk Out, is an exquisite piece of work by Seani B and Don. Musically intricate, it harks back to the golden age of Reggae while simultaneously rooting itself firmly in the 21st century. It was born on Strictly Roots, the title track from the Grammy-winning 2015 Morgan Heritage album and fits well into the resurgence seen in the Revival movement.

The basic riddim starts as per its title. An immediately purposeful horn section opens with a multi-layered refrain, almost regal with its demisemiquaver, beamed triplet arrangement. They’re almost proclaiming the beginning of something big. An electric guitar then picks up this triplet formation. But it’s more Funky Soul than Reggae, dropping an intentionally off key note at the end of the riff which catches you off guard. Both these then layer up, with a second electric guitar line coming in, hinting at where the track is going.

Freedom Horns Riddim then moves directly into Roots territory. The guitars are on a syncopated skank and the percussion does a one drop duty. But unlike some Roots, the bass avoids a heavily melodic, syncopated Rocksteady line – instead taking on more of a RnB riff duty. Also, interestingly there are no keys and no bubble rhythm. All this centralises the Ska horn section, which performs almost a vocal role. Seani B and Don have also brought in some elements of Dub, with the use of reverb and the tripleted drum synths that flit in and out.

But it’s unlike many riddims. This is because the track is not just a repeat of one section. It varies throughout, having different elements that wind in with a full break for the bass just after two minutes. The riddim goes full circle at the end, repeating the horn’s opening refrain.

It’s a smart, musically deft piece which has paved the way for some sensational interpretations from the roster of artists Bruk Out has got involved.

Listeners will probably be familiar with three of the cuts: Strictly Roots by Morgan Heritage (which also has an additional Dub version featuring James Zugasti), Cali P and Capleton’s Dem A Go Burn and Stronger by Black Uhuru featuring Agent Sasco. All equal in quality, all instant classics in their own right. But the new interpretations are just as powerful.

Hot-right-now Randy Valentine opens up the new era of Freedom Horns Riddim with No Hype Attached. His powerful voice is instantly recognisable, and his singjay on the track is strong: commanding, engaging and intuitive. Randy flips between the Roots-standard, rhythmically beamed vocal line and a rapid-fire, triple time Dancehall-like toast. He’s one of the most versatile artists around, and the Freedom Horns Riddim displays his performing prowess perfectly.

Also included on the release is the Think-Tonk Jungle Remix of the track; already on rotation on 1xtra. I probably shouldn’t say it. But it’s actually my favourite cut of the riddim. This is because it’s not easy to do ‘good’ Jungle; even less so to take a Roots/Revival track and turn it into a banger that works. But Think-Tonk has done it. The collective’s reworking is on fire.

A high-pitched, pulsing 808 on the fifth of the root delicately moves the mix away from the original with a two-beat, twice-a-bar rhythm. Although the third beat is missing, it lulls you into a false sense of familiar Dancehall security. Because, we’re then quickly off to Jungle: the 808 is now down over an octave and on a three then five-beat syncopated, off-the-root riff, accompanied by the triple time percussion going frantic. There are breaks; there’s drops; there’s synths – there’s musical madness. And the whole package just takes Randy’s vocal to another level, showing how Jungle grew out of Ragga/Reggae in the first place – and why it worked. Loved it.

To calm you down after that, Chukki Starr delivers something special on Can’t Break Me Down. A self-affirming, inspirational cut, Chukki’s voice oozes expressiveness throughout, with the complex layering of the vocal line accentuating this. Additional reverb is brought in to enhance the riddim’s underlying Dub influences. And lyrically it’s potent stuff. Spiritual self-confidence is the message, here, as Chukki narrates about how, despite vipers working against him, he still trods his path standing tall. “Hypocrite and parasite me quick fi bun dem”. Word.

Exco Levi delivers perhaps the Freedom Horns Riddim’s most conscious track with Blood Is On Your Shoulders. He gives a searing, raging narrative about the system, how it infects and manipulates the population and its nefarious agenda. Chukki swipes at the media, corporations, politicians and those who have Babylon’s ‘blood on their shoulders’. It’s another complex vocal track, with elements of call and response and Soul/Gospel backing lines offsetting Exco’s impressive vocal range and rhythmic ability. Lyrically it’s the strongest track, with Exco’s poetic skill shining through: “Them only care about their own interests, while the masses they must struggle every day in stress”.

His track perhaps sums up what’s so special about Seani B and Don’s riddim. They’ve managed to create a top-class, inventive piece of music that is thoroughly versatile. From Dub, to conscious Roots via Jungle, Freedom Horns Riddim is already one of the most exciting releases of the year, even though we have heard it before. And this impressive reinventing and reimagining of the 2015 riddim showcases the producers’ and the artists’ talents supremely. Tremendous. Written by Steve Topple for Pauzeradio.com (22nd January 2020).