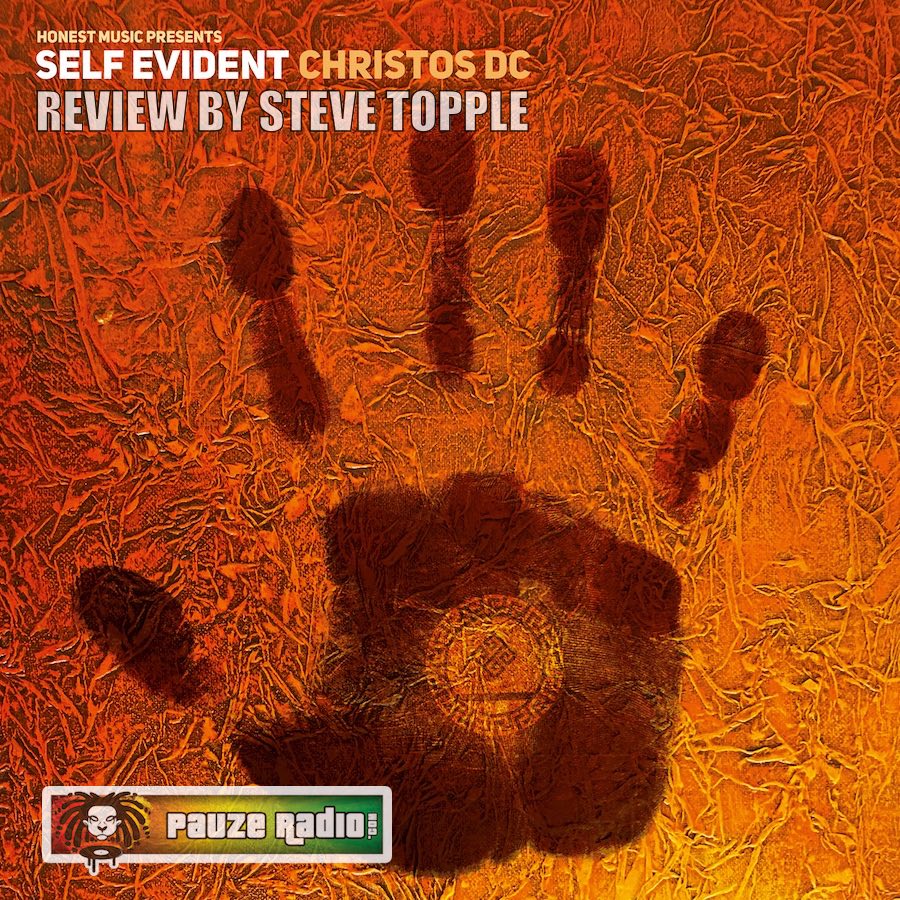 Christos DC has come a long way since his 2008 debut album Time To Rise. And, for want of a better pun, it’s ‘self-evident’ that this accomplished artist is at the peak of his powers. Because his latest album displays his musical prowess to the full.

Christos DC Self Evident, released by Honest Music, is of course what we’ve come to expect from this versatile artist. Fusing different genres to create skilled, musically pleasing sounds, Christos has created something of beauty, finesse and delicate intricacy.

The album opens with Silence. It would be doing the track a disservice to describe it as Roots. Christos has composed something far more complex than that. While all the traditional elements are there – a one drop, bubble rhythm and some Ska horns – each of these is embellished. Take the horns, for example. They almost serve a backing singer duty, with a call and response melodic line that equally could have been sung. The guitar’s do skank, but not in the normal, double time offbeat way; instead riffing just before and into the second and fourth beats. They also double up with rapid, semiquaver riff. The bass is on a fairly simple two-bar loop. But this is crucial, as it helps drive the track smoothly forward.

It’s this smoothness which sets Silence apart from usual Roots. The inclusion of an orchestrally-scored stringed section, with the violins on drawn out semibreves and breves, and the cello on a more syncopated melody echoing the bass, moves the track into almost Neo Soul territory. It’s a gorgeous opening, mapping out where Self Evident will be delving into.

Up next is What A Crime. Christos takes us into straighter Roots/Ska territory. Melodically, it’s an interesting track, heavily utilising the flat seventh chord off both the root (C major) and the fifth. While The Beatles took the credit for this musical device, proper Rock n Roll pioneer Bo Diddley started it, and it’s a staple of Dub/Roots as well. This makes for a curiously unnerving feel, reminiscent of the track’s sentiment. The Rocksteady, syncopated bass echoes this and the use of reverb just cements that track’s cautiously unsettling nature. The genius of this is that Christos has scored the majority of the track in a major key, making for a curious juxtaposition. Bliss.

Better To Be Free, featuring The Skankin Monks, moves us into again more eclectic territory. While its Roots on the face of it (note the skank guitars and the signposted breaks), the intricacies are delicious. The opening punctuated ensemble melody drips with Marley. Improvising pipe then Hammond organs bring some Soul sliding in. A piano drops an RnB riff, the electric guitars perform a distinctly Isley Brothers yet Bluesy duty and the backing vocals are Doo-Wop. A cow bell taps here while a washboard grates there, transporting you to the Motherland. The lightly used drums add to this, with a one drop kick virtually absent. Dubby reverb and Ska horns finish the package. It’s a detailed Smorgasbord of a Soul track, oozing laid-back yet purposeful class.

Christos then mixes it up again with Maybe. Those Roots devices are there again as a solid backdrop. But the track has the feel of smoky, contemporary Jazz. The non-standard chord progressions, focusing on the fourth and fifth of the root, the use of blue (‘off’) notes and the horn arrangement all lift it out of its base genre. Christos’s almost improvised, breathless vocal just adds to this. But you still can’t get away from that bubble rhythm and an embellished one drop.

Be Wise featuring De Dubros follows in a similar vein, albeit with more emphasis on the Roots. Christos’s vocal highlights this specifically, moving away from the meandering Jazz of Maybe into more beamed and pointed Roots phrasing. The arrangement is more stripped back, focusing on the bubble keys and the horns. To be fair, it’s probably the weakest of the album’s tracks. But in Christos’s world, weak doesn’t mean bad: Be Wise is a perfectly fine lesson in smoothed-out Roots.

From the perfectly fine nature of Be Wise to a masterclass in musical social commentary, and I Reserve The Right. It features rousing performances from Dada Yute, and the Skankin Monks. A Hammond organ is back, as is a prominent cow bell, and the drum arrangement is intricate. The bass’s repeated lick really drives the track forward. But I Reserve The Right is an abject lesson in how to do Roots properly. The punchy, forthright arrangement, utilising sharp breaks, pointed riffs from various instruments and a slow layering of all this to a crescendo is the perfect aural representation of the subject matter. It’s all very Marley, but for the 21st century.

Upward Looking Down slows things, as does Foot Catch A Fire. Musically similar, they almost act as a bridge for the album to lead into its final flourish.
The title track Self Evident is across the World a Reggae Riddim. As I previously wrote for Pauzeradio, it’s a complex affair, not conforming to the usual four/eight bar repetition most riddims do. But Christos’s vocal truly shines on the track, slipping into that improvised, Neo Soul vein hinted at earlier on the album.

In Peace concludes Self Evident. And Christos has ended on a high, both technically and stylistically. Another grand Marley-esque opening sets the tone. But then the Soul influences come soaring in, with that gorgeous Hammond organ back again, improvising like its life depended on it. This time the horns follow suit, with punctuated riffs where you can almost feel the musicians swaying their instruments from side to side. The bass is on a rapid, double time five beat clave, which only adds to that upbeat, sunshiny, old skool vibe. Roots still gets its one drop, bubble rhythm and skank. But even then, the keys drop the rhythm just before the bridge, going into an RnB improv. Funky Soul electric guitars whine just out of earshot and Christos’s vocal is again pure Neo Soul, flexing between a rich tenor and a breathless falsetto. The whole package is absolutely delicious, and probably one of the strongest tracks on the album. A fitting way to conclude the record.

It must be noted that the composition, arrangement and production are very classy affairs. From the wide-ranging use of varying rhythmic bass patterns, which cover numerous genres, to that damn Hammond organ, each track is a masterclass in clever yet organic musicality. Also, it’s not often that live horns are placed so prominently in a record, but Christos has put them left, right and centre in Self Evident.

Lyrically, the album is potent stuff. But unlike so many of his contemporaries, Christos does not allow himself to become entrenched in the negative. Tracks like I Reserve the Right and In Peace, while making strong statements about the state of society, are all very pacifist, almost channelling Dr King. From the off, the subject matter is fascinating, posing questions and providing some answers about the very nature of humanity and society. Silence is a perfect example. In this age of 24-hour news, digital mayhem and constant ‘scrolling’, Christos ponders if, actually, silence shouldn’t be viewed as a negative, uncomfortable human interaction, but a necessary one.

Self Evident is an expansive, technically brilliant project from Christos DC. His musical family lineage is clear, given the complexity of the compositions and arrangements. But what is so unique about it, is that it all feels effortless. That natural, organic vibe where it almost seems like the songs have just come together from each musician’s intuitiveness, is a rare and precious thing in the 21st century age of tech and streaming. And while it may not break ground in terms of its inventiveness, it makes up for that in pure class. Christos DC Self Evident Review by Steve Topple for Pauzeradio.com (12th February 2020)