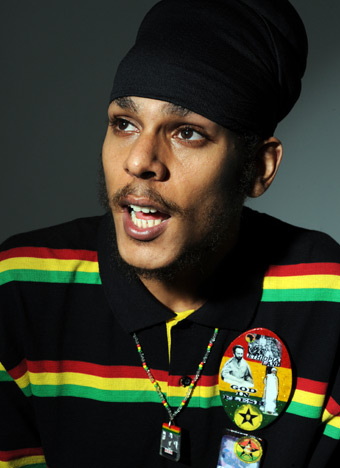 Short Biography: I was born in Brazil São Paulo city in 1986,  I grew up with a young Rastafarian community, the first Bobo Shanti in Brazil straight out a Bobo Hill and have been recording with big artists like Sizzla, U Roy, Derajah, Suga Roy and Crystal, Perfect Giddimani and more. I performed on Rebel Salute in 2006 with Lions Of Israel band from Brazil, when I came out the band and started to work solo, I also did shows in México, Chile, Venezuela, and some countries in Europe like Germany, France, Austria, Scotland, England, Spain and Portugal and all over Brazil.  Last year I performed at the biggest reggae festival on earth, the Rototom Sunsplash in Spain with tracks from my last release the Zion Bird EP produced by Gustavo Campos (GustahEchosound).

Gav Pauze: When did you first start singing?
Dada Yute: I remember that since I was very young I had a dream to be on the stage singing for the people with my big hair, but I didn’t know what to put in the music or what I should sing about, and I was a bald head, I didn’t have big hair, so I would just put a t-shirt on my head and sing loud na na na na. After I met the Rastafarian culture I discovered what I would sing about and how my hair would become long. When I was just a little kid in my home, I used to sing every time and everywhere, especially in the shower.

People at that time would say different things to me like “hey little boy stop singing” because I used to sing all the time and “oh you look so happy there my yout”, things like that. Professionally I started singing as the backing vocal from the band Lion of Israel from Brazil, then I started to sing lead vocal but I was always doing some harmony for different artists whether at a studio or live in a show.

Gav Pauze: Did your family do to encourage you?
Dada Yute: Yes, in general my father and mother always supported my musical interests. At first I wanted to be a drummer, I looked for a drum but it didn’t work out because I didn’t have the right place to keep it and practice, so I changed for bass. Then my father bought me a bass and I started to play it, meanwhile my mom gave me my first acoustic guitar which I still have now to help me make music and sing. I always got encouraged by my family. I used to hear my aunt say constantly “this boy will be a singer, look at the way he picks up the words and sings without even knowing the meaning of the words” (when it was in English).

Gav Pauze: Who else in your family sings?
Dada Yute: My cousin, my uncle and my father, not professionally, but with heart and soul. I am the only one in the family who decided to take music to another level. My father still has some pics from him in his school days with his band on stage, so that is one thing that encouraged me to continue doing my father’s will.

Gav Pauze: What kind of music do you listen to today?
Dada Yute: I listen to reggae and Nyabinghi mostly, but I find time to listen to Hip Hop and some MPB – Brazilian popular music. I also have been listening to Criolo and Emicida two brethrens that have a big buzz in music and I am so proud to see how big they are now as I remember where they started from and the struggle they had to go through before the break. Seu Jorge, another big ghetto man that gets a big break in music. I also love listening to music from Africa.

Gav Pauze: Do you release music on vinyl?
Dada Yute: Yes I do. My first and only until now was the song “War and Crime” on the Long Travel Riddim produced by Digital Dubs Sound System from Rio de Janeiro, this song was also one of the first releases of my musical journey, it was distributed by the label Kooga Sound from Germany, it spread all over Europe and Brazil. I also released this song in my first album called “Mensagem Real” some years ago, but you can listen to it on internet and at some of the best dancehall and dub parties in Brazil especially São Paulo and Rio de Janeiro.

We got the opportunity to release the first Nyabinghi song from Priest Tiger on a square vinyl with the art painted on the vinyl, this was the first time in music history that we could make our vinyl as a square and not as a circle, you can do it in Brazil at a place called Casa Brasilis, just google and you will find them!

Gav Pauze: Where would you most like to perform?
Dada Yute: I really would like to go to USA which is a place that I know that the people are listening to my songs, but I, of course, want to go Africa, Hawaii, Japan, China, and return to Europe as soon as possible. Last year was amazing at Rototom Sunsplash, Minho Reggae Splash and other places in Portugal with the Cool Operators crew, brother Romano and the warriors. Well anywhere Jah send me to perform that will be the place that I would like to be!!

Gav Pauze: Who would you most like to work with?
Dada Yute: Well to be honest I have been working with the best people I know, it´s just like a dream. There was times I used to only listen to the Jamaican artists that I would love to work with, and since Jah put me in this journey I have been recording and meeting all of these artists who I could just listen to on my headphones.

Jah is making it happen and opened the doors for me, so I recorded with big names and artists, like Mikey General, Black Uhuru, Michael Rose, Akae Beka from Midnite, Derajah, China Smith, Capleton, Half Pint, the great Perfect Giddimani who saw something in me and always invites me to work with him, so it’s a big thing for me. Anyway I would still like to work with names like, Falcão from O Rappa, Marisa Monte, Gilberto Gil, Wiz Khalifa, Cypress Hill and Keith Richards from The Rolling Stones.

Gav Pauze: What do you think about whilst performing?
Dada Yute: To be on stage and sing for the people used to be just a dream, and now it is a reality. There is nothing better than seeing your dream come true in front of your eyes, so at every show I feel my dream becoming a reality.

Gav Pauze: If you weren’t singing, what would you be doing?
Dada Yute: I would probably be serving vegetarian food at my restaurant or food-truck with a sound system playing music while people came to eat and dance.

Gav Pauze: Do you play any instruments?
Dada Yute: Yes I do but nothing serious or professional, just something to help me to make my songs or give me ideas to make a song. I can play a little acoustic guitar, bass, keyboard and drum. I still would like to learn a wind instrument before I get old.

Gav Pauze: If you could dabble in another genre of music, what would it be?
Dada Yute: Any genre that I can express myself and sing about the truth and the rights, singing about what I see, and not about what they, the system wants! I like to talk about the beautiful things in life, party, dance, blue sky, feeling alright. One of my choices is to sing about what is wrong in the system and about the struggle of the poor and have nots, about things that have happened to black people throughout history, where we have come from and where we want to go and of course to hail my king.

Gav Pauze: What hidden talents do you have?
Dada Yute: I can cook well, so now I think a good idea would be to bring create good food and work it together with the music. I feel that music and food in one place is a great thing like an auto sound system with the best Jamaican spice in the streets of Brazil, some thing that the people have never seen before.

Gav Pauze: What can we expect from you in 2016 and beyond?
Dada Yute: I will be in the studio working, I have a number of different projects going on and I have to be very focused and concentrate hard if I want to see it working and coming together properly. We have a new project called Baddis that is about to be released. It’s a trip using electronic, bass and trap which will reach out to many people. That project is produced by Gustah and Basa at Red Eye Station SP Brazil.

I am working on a new reggae album with Jah Youth Productions from Hawaii to be released in June. Not only that but I am also working on a reggae album produced in Brazil, directed towards the great Brazilian reggae fans. Many Portuguese DJ’s demanded more material in Portuguese, so that is what I will give them. As well as all what I have mentioned above, we have a few singles coming out regularly on different mixtapes, including the Juggling from Perfect Giddimani.

It’s a year of a lot work and organisation, sometimes in life you got to do things different if you want different results.