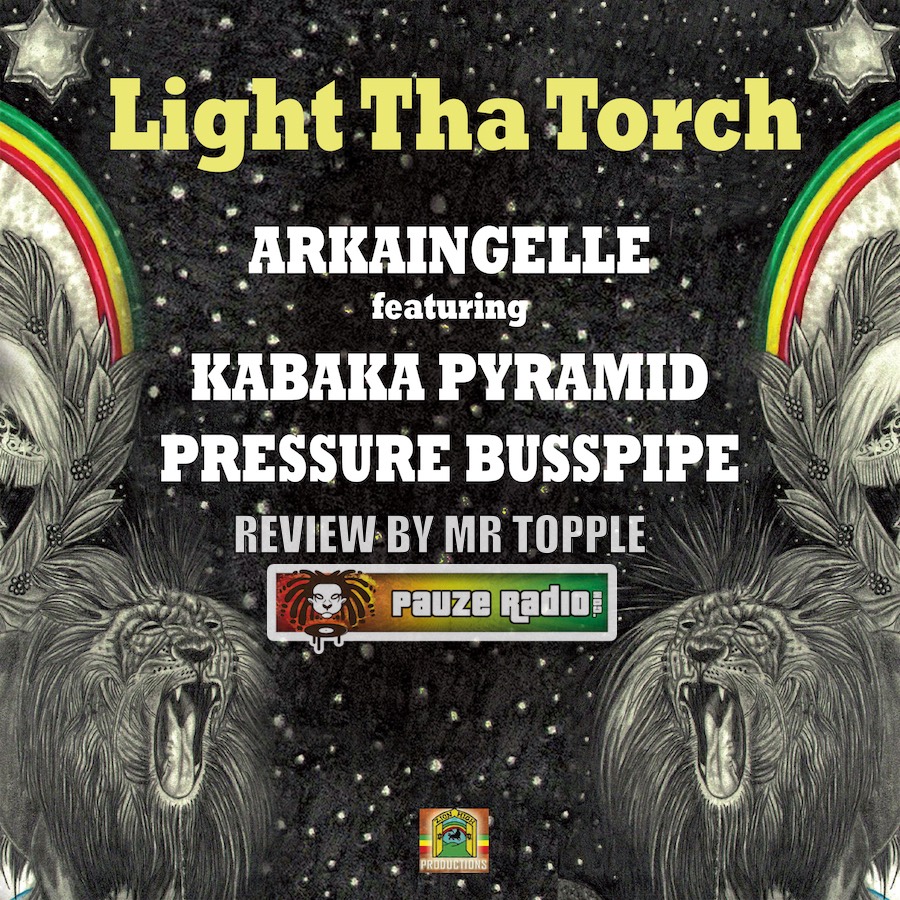 Yet more music to stir your soul and lift your consciousness has been gifted to us during the coronavirus pandemic. This time, Arkaingelle, Kabaka Pyramid and Pressure Busspipe deliver some cautious inspiration in droves.

Arkaingelle ft Kabaka Pyramid and Pressure Light Tha Torch, released via Zion High Productions, sees Arkaingelle showcase one of the tracks off his forthcoming album Nah Watah Down – out on 18 September. With production from the always sublime Zion I Kings across this track and the whole album, quality and musical satisfaction are guaranteed. Add in Pyramid and Busspipe to the mix – and it is perfection.

It opens with a glorious, ensemble riff before the track kicks in proper across distinctly Dub-led Roots. The bass, from David “Jah David” Goldfine is central to Light Tha Torch’s vibe. It operates across a varying drop-beat rhythm, which skips all the beats except the one at points in its phrases. Rich, resonant and imposing, melodically it works around the root chords across a syncopated rhythm – which creates an edgy feeling well suited to the nature of the track. The use of this severe drop-beat rhythm also serves to give the vocal lines prominence and create those Dub breaks.

Sean “Young Pow” Diedrick’s keys are sparse and heavily reverbed, generally entering on the fourth offbeat of bar two, with some additional riffing at points – giving the briefest glimpse of a bubble rhythm before they echo into the ether. These, combined with the bass, enhance the massive metaphorical breath Light Tha Torch takes during the middle of each bar. Meanwhile, Laurent “Tippy I” Alfred’s rhythm guitar is delicately used (unlike the preference in Roots to often make this central). It does the faintest of skanks, dampened almost out of earshot but still there – providing a solid yet gentle Roots device across the track. Goldfine’s pick guitar complements this well – heavily wah-wah’d, dropping in with some rasping riffs – but again the line has been engineered to serve a background role.

Lloyd “Junior” Richards’ drums are unfussy in their arrangement. Avoiding a one drop, the kick hits the downbeats; hi-hats run across double time rhythms while the snare focuses on the two and four and tom-toms occasionally roll at the end of bars. This more Hip Hop style adds to the overbearing vibe. Additional percussion from Goldfine sees bongos (or similar) tinkering gently at points. There’s also the briefest appearance of an electric organ, running chords which are heavy on the vibrato.

Just to finish off the Roots’ flavours, Andrew “Drew Keys” Stoch’s trombone is gorgeous. His performance is wonderful – full of haunting crescendo across the dotted semibreves, with some excellent tonguing technique across the responses to the main vocal’s calls to give staccato ‘shouts’. He does a brilliantly placed up then down glissando in response to Busspipe singing “speak out your message to the institutions”; a neat piece of musical anthropomorphism. When combined, these variations in technical style build on the overall vibe to finish off Light Tha Torch’s heavy and unsettling feeling. Perfection – as are the three artists’ vocal lines.

Arkaingelle is well-enunciated, sharp and forthright – using neat syllable clipping to accentuate the lyrics. Pyramid contrasts this well – with his smoother, more elongated singjay soaring across the arrangement. And Busspipe juxtaposes them both perfectly, with his rasping, gravelly singjay and rapid-fire rhythmic patterns. Lyrically it’s potent stuff, too – as the three artists discuss Babylon’s implosion that’s happening right before our eyes, and the accompanying conscious and spiritual battle that’s ensuing as the system tries to shut us (notably here the youth) down.

The accompanying music video is via the creative hand of director SAMO, fresh from his work on the visuals for Akae Beka/Tiken Jah Fakoly’s track Everything Bless. It’s a smart piece of lockdown production – interspersing homemade snippets of the three artists with additional, on-location footage. The ‘selfie’ videos have been mixed together, to give the effect of the artists responding to each other. Across the on-location shots, a milky, washed-out effect has been applied to nod to the sombre nature of the track. And SAMO has messed with the post-production, adding film negative frames and frame skipping. All of this combined gives much of the video an almost Super-8 feel; contrasting well with the distinctly modern, solo mobile footage of Arkaingelle, Pyramid and Busspipe.

Light Tha Torch is strong work from Zion I Kings and the three artists. Affecting and brooding, the arrangement is extremely well-placed to convey the lyrical content. Arkaingelle, Pyramid and Busspipe have done sterling work across their interpretations – and the track as a whole bodes extremely well for the forthcoming album. Powerful.