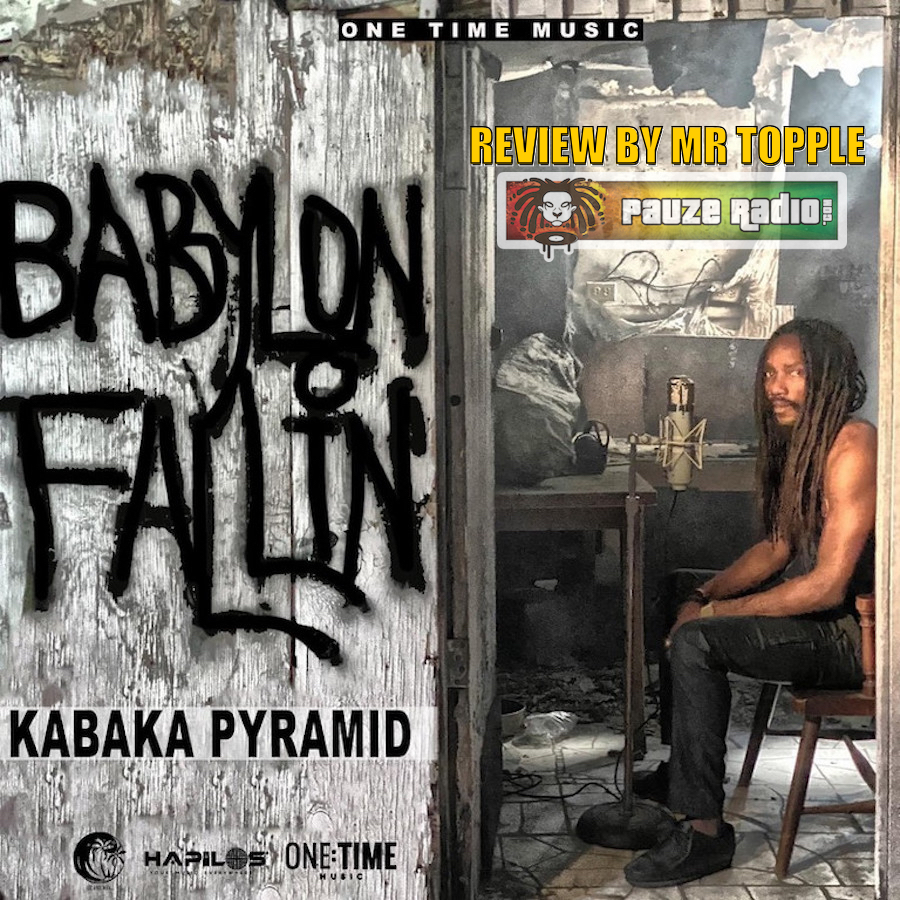 With almost perfect timing, artistic icon Kabaka Pyramid is back with a new track. And its message is wholly apt, as the world around us slowly burns – both physically and metaphorically.

Kabaka Pyramid Babylon Fallin, released via One Time Music and Bebble Rock Music, is a tour de force of musicality and lyricism. Production from Island Wav is stellar – combining both tried-and-tested compositional devices with delicate yet pointed inventiveness. The slick engineering and mastering finishes off the package. And overall, the track is a top-class, haunting 21st century hybrid affair – because it draws inspiration from various genres.

Its opening is bold, almost cinematic – and quickly brings in the various instrumental elements in play as well as the memorable chorus.

The drum arrangement is pure Afrobeats/Afro-Dancehall, with the snare hitting the two and its off, followed by the four. A rounded kick hits beat one, followed by the off between beats three and four. Snaps are brilliantly arranged, frantically hitting staccato both off-and-on the beat – but engineered so they almost sound like part of Pyramid’s vocal line: a constant ‘tutting’, almost inaudible in their own right, but nodding to the angry and critical theme of the track. The fulsome, 808-esque bass is complimentary to this, switching riffs throughout from an almost part-Dancehall clave at points to a pared-back, three beat-a-bar rhythm – and its sliding glissando is glorious.

Overall, this stuttering rhythm section drives home Babylon Fallin’s modern feel and creates a near-full Dancehall clave when combined, but with an Afrobeats’ instrumental arrangement. But the subtleties in other areas transcend Afro-Dancehall.

Djembe tinker dotted rhythms just out of earshot, bringing in more traditional African music. The use of an atenteben (or a similar wooden flute) at the start of Babylon Fallin and then intermittently throughout builds on this; working across chromatic notes which creates a counter-melody. What sound like acoustic guitars are heavily dampened and compressed, to give an almost otherworldly quality. Keys are similar, again compressed and dampened to the point of almost being ‘other room’. The use of reverb throughout, not least on Pyramid’s vocal line, the backing’s and the additional instrumentation bring in an almost Toronto RnB timbre to the track: brooding, unsettling and disconcerting; some Trap buzz rolls wouldn’t feel out of place.

Babylon Fallin’s backing vocal lines are ingenious. They’re arranged to blur the lines between traditional, almost chanting African, and Soul call and response across multi-layered harmonisation. Then, Wav has reverbed and messed the engineering on these, too – creating a haunting effect throughout. The attention to detail across the track is of the highest order. And then, you have the man himself and his performance.

Kabaka Pyramid is undoubtedly one of the most gifted artists around. He is a master of smashing vocal and singjay together, creating a synonymous style that is instantly recognisable. And his talent is such that his voice compels you to sit up and take notice; not least through his consistent, crystal-clear enunciation.

But that in itself is no mean feat, given the melodic and rhythmic complexity of his performance, here. His use of both repetition and embellishment of rhythmic patterns is that of a highly skilled rapper – and it’s intuitive, becoming more embellished depending on the lyrical and syllable content. The second verse is a perfect example of this progressively building use of rhythm – where he switches from rapid semiquaver rhythms with broader dotted elements, to more semiquavers but this time with triplets. Melodically, he sails across his upper tenor range with deft use of dynamics, again rising and falling naturally with the lyrics. And what lyrics they are.

Pyramid doesn’t hold back with his scathing assessment of the system and its perpetual crises, now reaching catastrophic levels. He discusses the creeping nature of Babylon, and how its control takes over without us even noticing: “You never see it coming like tief inna night, when your city start bun-up like weed inna pipe”. He laments the system’s MO on verse two, taking aim at those in charge: “Nah get no answers… just semantics, the lies themma tell, yes they stretch like elastic”. Ecological catastrophe, climate change and poverty feature heavily across Babylon Fallin. But Pyramid is resolute in where things are heading, as he proclaims “The truth it is clear, revolution is near. Dutty Babylon best prepare”. Amen to that. It’s poetic and political dynamite and as always showcases his skill as a lyricist.

Kabaka Pyramid Babylon Fallin is up there with the best tracks of 2020 so far. Wav’s production is phenomenal, effortlessly blending genres and styles to create a complex yet accessible sound, filled with delicious detail and slick arrangements. It’s also the perfect platform for a furious yet collected Pyramid – and the whole package is near-perfect. Revelatory and revolutionary.