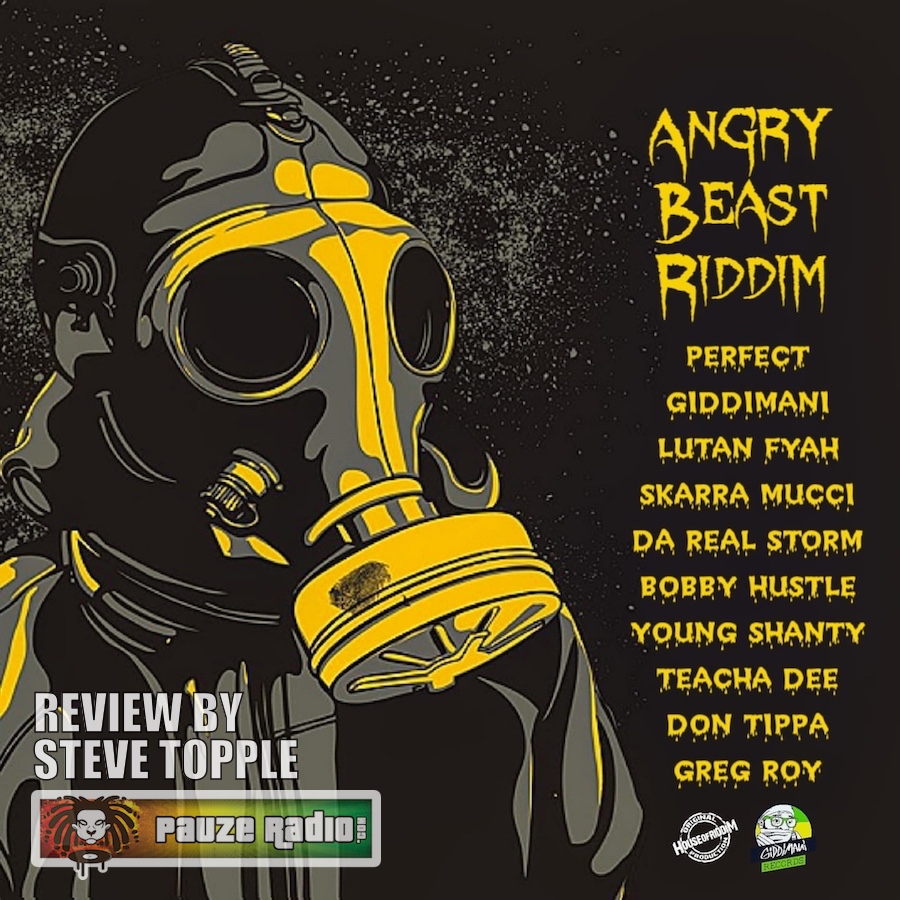 There’s a lot to be said for taking things back-to-basics with riddims. Authenticity, letting the artists’ messages speak for themselves and accessibility being factors. But there’s also a lot to be said about ones which are musically complex and intricately crafted. And Giddimani Records’ latest release is just that.

It’s a complex, musically deft and somewhat ambiguous affair – even though on the face of it, it seems ostensibly Roots and Dub. These two genres are clear from the opening. The bass uses a traditional, heavily syncopated and driving riff, dropping the fourth beat in every second phrase. Keys from Parvez Syed perform a bubble pattern, guitars skank at times and heavy use of samples, synths, reverb and decay are a dominant feature. But there’s a notable absence of a straight one drop in Gilly’s percussive line. Instead, multiple accents on the offbeats dominate, led by blocks. They admittedly do ‘drop the one’, but then hit the remaining beats, varying between a straight on-beat drop and two-strike, triple time rhythms. The kick’s role in this is completely at odds with usual Roots/Dub sensibilities – often dropping double time on the downbeats. It’s a brave but applaudable move, as it enhances the urgency created by the bass.

But what defines Angry Beast Riddim (and also many other tracks in the category this year) is that it stands up as a composition in its own right. Gone is the more traditional, fixed eight or 12-bar sequence that just repeats for four minutes. Instead, Giddimani has composed a varied piece of music. Herb Pirker’s electric guitars are the most notable, cleverly executed element of this. They flip between a haunting, double and triple time riff and a gorgeous, almost Prog Rock/Ambient solo section. Then, Manfred Scheer’s bass takes the underlying riff and moves it up an octave in places, using a slap technique to give it a raspy, staccato, Funky Soul quality; also at times triple-timing it before the engineering kicks in, dividing the rhythm up again until it becomes frantic. There’s even a Hammond organ that makes very fleeting appearances. It would be remiss to call this Roots or Dub. Because the sum of its parts is nearer to a driving, Reggae-influenced Funky Soul-meets-Prog Rock track.

It’s an exceptionally smart composition. And all this means that the featured artists have a superb platform to bounce off. And bounce with style they do.

Giddimani himself opens proceedings with A Baby, featuring the ever-busy and always on-point Lutan Fyah. It takes the original riddim and loses the more Ambient, otherworldly elements – going straight in with the incessant doubled-up bass riff and not letting up. But Giddimani and Fyah have then messed with the original cut even more. Pirker’s Peter Gabriel-esque solo is no longer in near-isolation, but accompanied with an additional Hammond organ line – and its segment is used repeatedly as the bridge on the track. There’s a heavy focus on Soul-like, harmonic layering on the backing vocals. But it’s the two artists’ performances which really impress. Their voices are perfectly suited as they muse on the fact that, regardless of your perceived achievements in life, we’re all born the same way: “Rosa Parks was a baby. Martin Luther was a baby. Malcolm X was a baby”. Amen to that.

Next, and Da Real Storm gives us her interpretation as the title track. It too goes for the more driving and incessant part of the riddim, as do most of the rest of the versions. But Storm mashes things up, performance wise. She delivers a lesson on how powerful singjay can be, when coupled with a competent vocal. Of note is this is her rhythmic arrangement of the chorus, whose bouncing, beamed flow fits perfectly with the winding bass line. But Storm also shows what a powerful singjay she can do – not least an intelligent use of rhythmic pattern replication to accentuate the lyrics. Her use of range, rising up her register to accentuate certain syllables, is also impressive – and the thematic content, about how many of us are ready and willing to rise up against the system, is on-point – not least her use of the current coronavirus pandemic to hammer her point home: “tell I neighbour fi self-quarantine”. Delicious.

Young Shanty dishes up More Than Just Friends. It’s another perfect example from this US artist of how Neo Soul can crossover so perfectly with Roots. His voice has a sublime timbre to it – flipping effortlessly between his smooth, silky tenor and an almost identical-sounding falsetto. This is a particularly pleasing aspect of Shanty’s voice, as the standard for male singers tends to be to ensure there is a marked difference between ranges. His melodic arrangement is a stroke of a genius, as well – mixing double time and dotted/beamed notation with runs up and down from the third of the root. It makes for an instantly memorable melody – and provides the added dimension of being transferrable to another track entirely. The whole piece would work just as well as a slowed-down, 21st century Neo Soul cut. Maxwell would be impressed.

Following on from this, and Inspired by Teacha Dee takes more of a Roots approach to Angry Beats Riddim. His authentic, compelling voice immediately grabs your attention, and opening with the chorus is also a clever move. Again, like Shanty, it’s all a bit of an ‘earworm’. The verses and bridges serve to enhance the chorus, too – with both being smartly composed to give enough intricacy to hold interest, but not fussy enough to distract. And the positivity from Dee just oozes, as his passionate performance calls for us to have faith and humble self-confidence in the face of what the system throws at us – and if we do, then we can be on a “path that’s going right”. It is, indeed, inspired.

Bobby Hustle gives his unique take on the Angry Beast Riddim with Moving in the Streets. The Seattle-based vocalist perhaps takes the most Reggae approach to the track. His vocal avoids the clipped syllables of some of the other artists, instead opting for something more Soulful with his drawn-out phrasing. His smoky, gritty yet mellow voice is a joy to hear – and he has a natural swing to his performance, which works well with the bass. His melodic arrangement is also very Reggae, working off the root a lot of the time to draw your attention to the rhythm and lyrics. On the bridge and chorus this is mixed up; the layered backing line compliments all this perfectly and the end result is an aurally beautiful addition to Angry Beast riddim.

We told you Skarra Mucci was fyah. And I Told You showcases this Dancehall/Ragga artist’s talents well. His deep, rounded voice is very versatile – sitting equally comfortably between a middle-range baritone and a mid-high tenor. You can tell where his roots lie, as the rhythmic arrangement of the melody is heavily syncopated and mixed on the verses. But Mucci holds back from going too frantically, ensuring that every word is crystal clear and no notes are dropped. And lyrically its potent work, weaving a detailed and colourful tale of how the system envelops so many of us, often without us realising, while those in power have “been watching the youths and their future, just to gain some wealth”. Mucci details the hows and whys of Babylon’s control – but also offers a message of hope amidst the carnage. It’s well-executed and stirring stuff.

Greg Roy gives a fascinating nod to Bob Marley on Buffalo Souljah. It’s a thoroughly social and spiritual affair, as he weaves a highly detailed and compelling narrative across an effortless and soulful vocal. Roy’s performance is incessant, matching the riddim perfectly. He spits across rhythmic patterns and sails across vocal registers. But it’s his intonation and use of dynamics which particularly impress. He builds the verses in layers, reaching pointed crescendos at the ends, before pairing back his performance slightly on the choruses; musically this also matches the melodic arrangement as the verses are higher in pitch. Roy has managed to include a staggering amount of thought into one track, thanks to his rapid-fire delivery. But the overriding theme has humbly yet pertinently built on Marley’s original; moving forwards from discussing black liberation and onto full emancipation for everyone who lives under the system’s shackles. Vocally impressive and lyrically brilliant, Buffalo Souljah is probably Angry Beast’s Riddim’s stand-out interpretation.

Living in Jamaica comes from Don Tippa. He’s thoroughly at home across the riddim, giving a pared back performance compared to some of the other cuts on the riddim. But it works well for the poignant theme he delves into. Tippa impresses most because he switches between a soulful tenor, which serves as more of a plea for humanity on his island – to a gravelly, angry singjay, which is a surprise when it happens but actually enhances the track. It’s a sad, damning indictment of how Jamaica has been corrupted by the system, politicians and corporations – and the effects this has had on the people, not least the youths. It’s hard-hitting, stereotype-smashing work which, while somewhat unsettling listening, is much needed.

Giddimani is back on the riddim’s ninth and final interpretation. Wrathology sees him give an extremely assured performance. And much like his composition, he’s at the peak of his powers. He has one of the most recognisable voices in the Roots movement, and it’s used to full effect on Wrathology. He spits syllables at an extremely impressive rate, running up and down the root chord at the same time. Like many of the other artists, this intuitively fits with the driving bass. His now-renowned flair for expressive use of intonation shines through – flipping up the pitch at the end of certain phrases to accentuate them; while his falsetto on some of these is very striking, almost taking you aback. Giddimani’s whole performance barely stops for breath, aside from the intentionally smoothed-out bridges, and it is one of the most impressive across the riddim. Pitch-perfect, from Mr Perfect.

Angry Beast Riddim is pure quality from Perfect Giddimani, his label and House of Riddim. One of the more impressive ones to be released this year, it’s musically fascinating – filled with lovely detail and surprise that elevate it from Roots/Dub into something else completely. The artists’ works are all top-class, too – and the selection of them is also smart, giving a broad range of styles and subject matters. The whole project is a joy – and shores up Giddimani’s reputation as one of the most talented artists in the Roots/Dub scene. Fantastic. Angry Beast Riddim review by Steve Topple (10th May 2020).