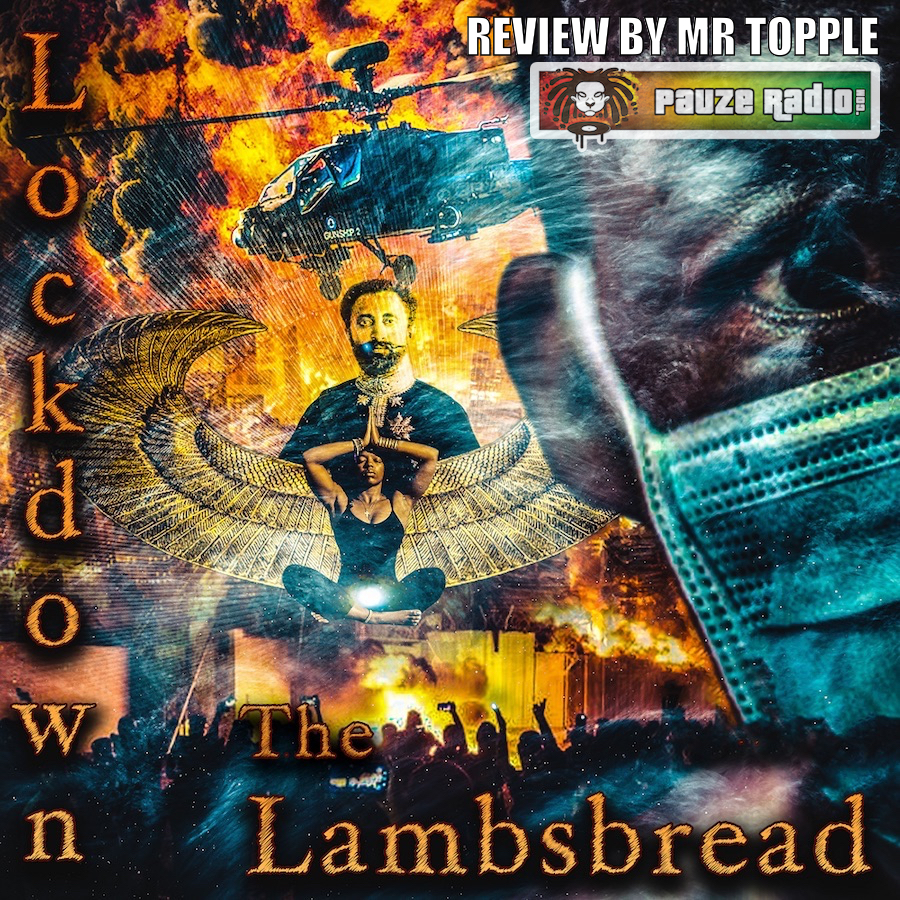 The Lambsbread: Lockdown Single Review by Mr Topple for Pauzeradio.com.

Coronavirus has featured heavily across Roots-derived music in recent months; an indicator perhaps of the toll it’s taking, and anger/frustrating it’s generating, across society. So, with that in mind – enter The Lambsbread with a thoroughly pertinent contribution to the narrative.

The Lambsbread Lockdown, released via Next Generation Productions, sees highly-skilled production from the family collective’s keyboardist (and vocalists Kaya and Nadia’s son) Jacob Selassie. It’s overly Roots-based, heady in its arrangement with some glorious touches thrown in. Miami-based Fuller Mastering has done its job exceptionally well – creating a rich, resonant track which sits in an ethereal-like lower kHz range – creating a dreamy, otherworldly feel which marries well with the composition and thematic content.

Central to the song are some authentic Roots devices, and others which deviate from conventions. Keys, whose timbre is tinny and higher-passed in terms of kHz, perform an incessant bubble rhythm which breaks into occasional syncopated chord sequences, across dotted rhythms and triplets. This arrangement is almost a nod to the relentlessness of the system (the bubble rhythm) juxtaposed with flashes of rebellion (the syncopation). It’s a clever move and elevates Lockdown above just standard Roots fayre.

Chris Meredith’s bass is expertly played (unsurprising from this veteran musician). It’s the driving force of the track: rich, rounded while not being overpowering. His technique (less picky and a slower pluck without stopping the strings to quickly) and the winding-down of the mid and treble on the amp create a flowing, resonant sound.

The rhythmic arrangement is interesting: across a two-bar phrase, Meredith drop beat one at the start of the first bar, and then the following four in bar two. This creates a pause of two beats at the end of each phrase; an effective, elongated one drop and an anthropomorphic intake of shocked breath. Melodically, the bass harks back to a previous time, as it focuses on working around the root triad of each chord progression (a technique before the diatonic and chromatic melodies of Rocksteady came to the fore). It’s beautifully and cleverly done.

Drums are central to Lockdown, from Kaya and Nadia’s other son, Samuel Levi (who also did the sympathetic and technically brilliant mixing). There’s a move away from Roots, here – as a standard one drop is absent. Instead, the snare performs a rudimentary, open skinned hit on the two and four which finishes in a less standard manner with a brush across the skin. The kick accents the one and three, while hi-hats run semiquaver rhythms – and as a sum of their parts, Levi has delivered a sympathetic performance, in-tune to the track’s MO.

Meanwhile, the guitars from Jesus “Chewy” Gallegos are subtle yet effective. At times doing a pared-back skank, at others they offer they offer up a response to the main melodies call – and on occasion mimic the main melody. Their tone is all very Cali: mid and treble of the amp up and plucking nearer the bridge to make a howling, whining sound. And Chewy’s use of vibrato and bending is lovely. The other additional line is an electric organ, which makes fleeting appearances across heavily vibrato’d chords. Some Dub use of reverb and decay finishes off the edgy vibe perfectly.

Overall, Lockdown is an atmospherically composed, arranged and produced track. And the vocals from Kaya and Nadia build this unsettling nature further. Their lines have been utilised well, with a consistent motif running through the track, where Nadia replicates Kaya’s line but two octaves higher. At other points, she harmonises – adding depth to the vocal lines at the appropriate times in the music. Meanwhile, Kaya’s vocal is everything it should be: breathy, desperate and filled with trepidation. He uses a singjay-style of rhythmic arrangement, working around more dotted notes than anything else while the melody is kept uncomplicated. And Nadia’s soaring and searing soprano is a veritable cry for common humanity amid the chaos.

The track is lyrically powerful too, as the pair muse on coronavirus, government actions and the societal response to both. As the pair note, “And still they use divide and de rule; so why we never learning” – pertinent for much of society’s seeming subservience to toxic governments during the pandemic. But Kaya and Nadia also offer a message of hope: “Richness is life, given to you at birth; don’t forget to take care of the Earth. De body is de vehicle, look out for yourself…”

The cover image for the track also deserves a mention. Created by Art by Ancient, it’s wholly befitting of the song. An almost a 21st century Sandro Botticelli interpretation of Dante: fire and chaos – with modern-day tortured souls holding their smartphones. The look of terror in the eye of a person wearing a mask is haunting and effective. And Haile Selassie sitting in the middle of all the carnage is telling. Overall, it encapsulates the music and themes well.

The Lambsbread Lockdown is a brooding, otherworldly affair – not least due to the sheer quality of the musicians, the brother’s production and mixing and the final mastering. Inventively arranged with excellent attention to minute detail, The Lambsbread are a family, and musical collective, of inspired talent – and here, this once again shows them at the top of their game. Beautiful.