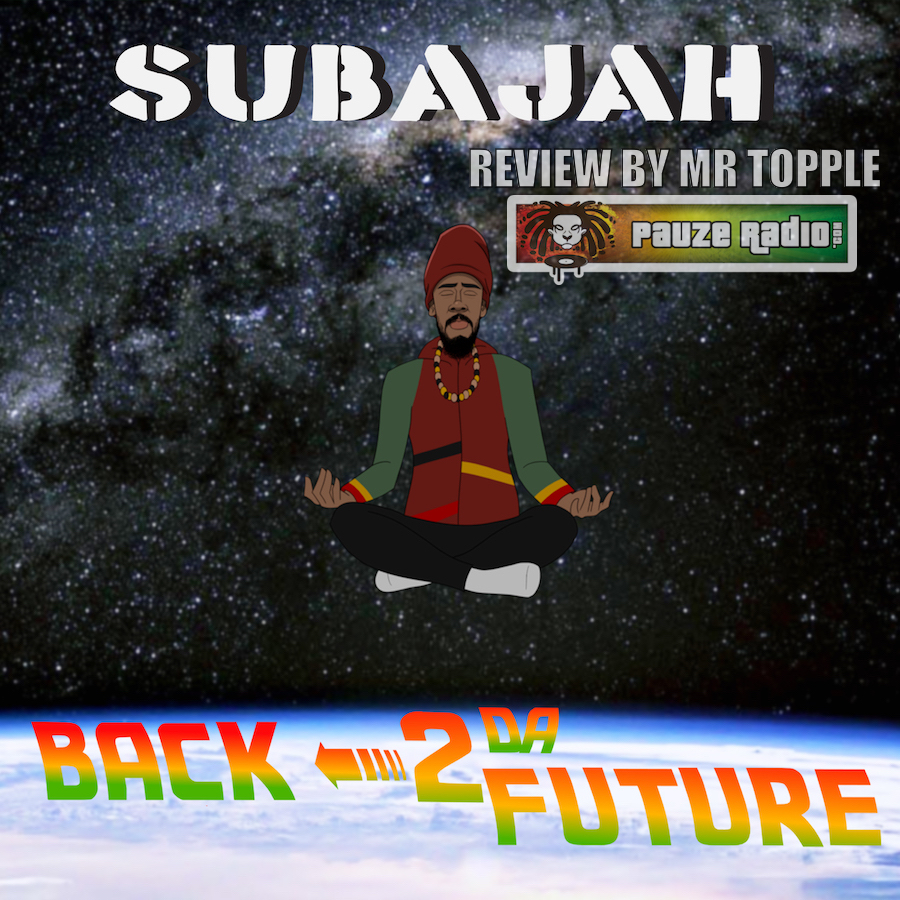 No time machine in sight when Subajah recently dropped his latest cut and the accompanying visuals. ‘Great Scott!’ I hear you cry. And rightly so. As the track is another power-move from this talented artist.

Subajah Back 2 Da Future, released via Dashen Records, sees Subajah and producers First Eye Productions create an interesting and pertinent take around the theme of the late 80s/early 90s film series of a similar name. It’s an ostensibly Roots/Dub affair, with varying levels of musical devices in play that drive the sound and vibe.

The bass is, naturally, central to Back 2 Da Future. Performing an incessant and unrepentant riff, it refuses to drop a beat (unusual in Roots/Dub arrangements), instead performing a staccato pick on some of the threes and fours. Melodically complex, it runs its riffs around the diatonic scale, almost creating an accompaniment to Subajah’s main vocal. Its sound is imposing and reverberating, creating a deep, unsettling sound which is Back 2 Da Future’s leading force.

Drums are next on the overly imposing list of instrumentation. There’s a notable lack of a one drop, with the kick instead focusing on the downbeats. The abrasive snare is also more intricately arranged, being led by the two and four but with additional hits at the end of mostly every fourth bar. Hi-hats run dotted rhythms, and the overall drum arrangement is hard and brash – complimenting the bass line well.

Keys are predominantly on a bubble rhythm, minus the more traditional right hand, treble clef syncopation. In keeping with all good Dub, at times they evaporate into the ether across heavily rhythmic reverb and decay. Their sound is stark and tinny, with nice attention to detail on the kHz and passing engineering. The end result of the whole rhythm section is a sound which is unsettling and grinding; unrepentant, like the thematic content.

On top of these instrumental lines comes some good use of synths and samples. Something that sounds similar to a bottle bell synth runs a rhythmic motif – the same as parts of the melodic line, but notation-wise it runs eery, outer space-like arpeggio chords. Rasping, synth horns are an exceptionally nice touch – cleverly nodding to 80s Synthwave, and in the process being a dose of musical anthropomorphism of the lyrical content, with their dystopian feel. Back 2 Da Future’s backing vocals are straight-up Roots: Soul/Gospel influenced, working around intricate harmonisation and responses to the main melody’s calls. And the additional engineering on Subajah’s vocal, with its mashing up of the EQ, compression and inputting of reverb, finishes off the whole, brooding and unnerving arrangement perfectly.

The man himself is completely on-point across Back 2 Da Future. Vocally impressive as always, he strikes the delicate balance between straight singing and singjay well. His tone is rich and warm (a stark contrast to the lyrical content). He cleverly raises the melodic intonation as the track progresses, building the tension well. And his enunciation is perfects, with crystalline delivery of the lyrical content. And that content is wholly appropriate and searing, as Subajah build a narrative of all the pitfalls and wrongs of Babylon. But the ultimate message is that we’ve been here before, and despite technological advances and changes in the way society operates, the system’s MO is no different – and still continues apace. For Urban UK’s animated video is delicious. It sees a cartoon Subajah in full, 80s high-contrast colour but with a shadow wash applied. Otherworldly images pervade the track as do satirical incarnations of familiar brands and scenes from the capitalist system. What’s particularly impressive is For Urban UK’s marrying of the cartoon Subajah’s embouchure (mouth movements) with the real-life artist’s performance. Impressive attention to detail.

Back 2 Da Future is a sizzling piece of work from Subajah and First eye Productions. Musically creative and wholly constructed to fit the lyrical content perfectly, it’s infectious and infinitely listenable. And, the message is pertinent and searing. A veritable anthem for 2020. Stellar.