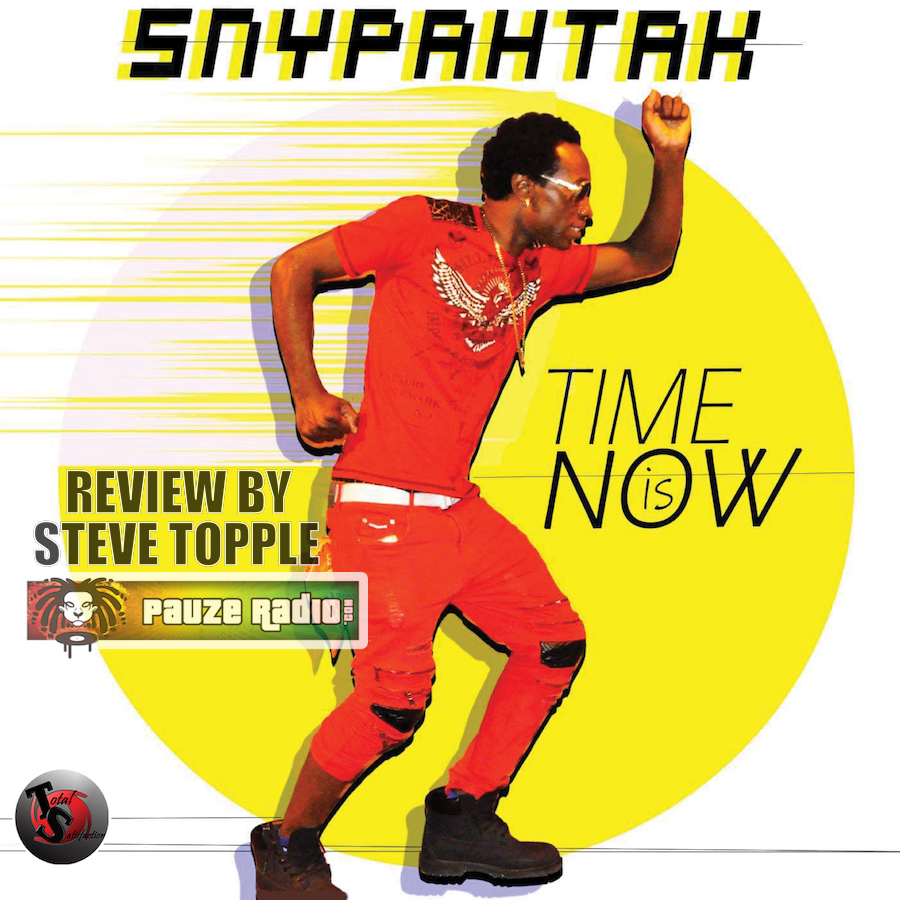 Now considered a veteran of the Roots movement, Total Satisfaction Records is one of the smartest labels in the business. Now one of its artists, Snypahtak, is back with an EP. And satisfaction is guaranteed.

Snypahtak Time is Now, released via Total Satisfaction Records, is a deep dive into Reggae-based music. Production from Leon Smillie, the label’s founder, is as you’d expect: intuitive, inventive and delicately crafted. Covering a multitude of styles and genres, the EP is almost a lesson in all the derivatives of the genre – and how to do them well.

The EP opens with Stepping in Style. It’s pure, feel-good, old-skool Reggae/Dancehall in a nutshell: electric guitars skank, keys perform a bubble rhythm and the bass is syncopated, working around the root chords’ triads. But there’s more detail to the track than first meets the eye. For example, the bass has been EQ’d to create a rich, rounded sound – feeling like an 808. Guitars also do a secondary, riffing line – which Smillie has engineered at times to bring in Dub, smothering them in decay and reverb. Drums are more embellished than a straight one drop, not least because the kick hits every beat – and everything shouts ‘Dancehall Sound System’ at you, including Snypahtak’s winding, laid-back vocal. It’s a strong opener – and interestingly sets the tone for the rest of the EP well. As this technically bright yet authentic sound features heavily.

Next, and Boops Mi Out is a deliciously curious creation. It should be Reggae – with its keys doing a bubble rhythm to start with. Yet Smillie and Snypahtak have brought something funkier into the mix. The bass, with its higher-passed engineering, drops the one and uses a repeated riff that works up three melodic tones and back again, giving a grind and wind to the track. The hi-hats use a swinging dotted rhythm, with the snare rim click hitting the two and four. There’s a delicious interplay between a melodica and an electric organ, where they simultaneously play the same melody before separating into different riffs – calling and responding to each other. And while the occasional, elongated reverb hints at Dub and guitars skank and riff – it would still be remiss to call it Reggae. Perhaps Neo Soul with Jamaica at its heart is more fitting – because the amalgamation of genres is just that. Sophisticated.

The title track takes the EP into straighter yet modern Roots territory. The bass is a dominant force, using a syncopated rhythm that hits the half offbeat before the third, giving the impression of dropping the beat. This clever device, along with the octave-jumping melody, provides momentum to what is actually a fairly slow BPM. Drums perform a relentless one-drop, while electric guitars skank. But Smillie and Snypahtak take the guitars skank and bring in elements of Dub, hitting the reverb and decay to make them scatter off into the musical distance. A second guitar line riffs on occasion, with some gritty use of a wah-wah pedal. The additional instrumentation is also excellent: synth choral voice effects bring some haunting resonance to proceedings; a synth flute flutters in and out and horns also play their role – making Time is Now a broodingly well-executed track.

Boom Boom sees Snypahtak team up with Bachelor (who also impresses) across yet more feel-good vibes: essentially an old-skool Dancehall track. A pacey BPM creates an immediate wind for the bubble rhythm keys and skanking guitars – enhanced by some rapid work from the hi-hats and rim-clicking snare. But the joy of the track is the musical intricacies. Not least among these is the bass, on a two-bar phrase which drops the one in the second part. Also, a rather atenteben-sounding flute line dances along in an attractively care-free manner. This music anthropomorphism fits Snypahtak and Batchelor’s message well: recalling a time before Dancehall became slack, and was about Sound Systems, communities and uplifting music. Gorgeous.

Following this is Whine (Drop Vox Mix), a glorious modern-day track – which is almost impossible to pin down. The swaggering, instrument-swaying horns are on double time riffs, driving the track forward and giving it a swing – almost Ska. Drums force the kick to focus on each beat, creating a heavy sound while those hi-hats go closed and open again and rim clicks hit the offbeats – which feels all a bit Afrobeats/Dancehall. Keys do an intermittent bubble rhythm (back to Ska/Roots), while the bass works on an incessant, dotted riff which drops the second beat. And synths finish off the package, with some heavy nods to Dub. Musically, it’s probably best to leave the genre definition open – but for my money Whine sits more around Reggaeton than anything else. Moreover, what’s revelatory is Snypahtak’s vocal – as he assumes the role of both the man and woman, alternating his timbre and delivery accordingly. It’s inventive and interesting – and a bold move.

Hold Up Your Head takes Time is Now back to Roots. Again, the bass is expertly crafted: mimicking the main melodic chorus line at times, while at others working with its rhythm but with notation around the triad – serving to give depth to the track. Horns perform a bubble rhythm along with some funky riffing, as a response to Snypahtak’s call – while keys perform incessant quaver chords, driving the momentum, but intricately done so as not to take prominence. The drums do a one drop, but the engineering is done so as the snare rim clicks take prominence on the two and four over the kick, giving lightness to the arrangement and allowing the bass, vocal and horns to take centre stage. But the occasional flourishes and multi-drum rolls at the end of bars remind that we’re in solid Roots territory. And the addition of a fleeting melodica rounds off Hold Up Your Head as an expertly crafted track.

Snypahtak goes into sumptuous Lover’s Rock with Under the Moonlight – and it’s perhaps one of the strongest tracks. The arrangement is wholly symbolic of the origins of the genre, and masterfully done. The keys’ role is a double one, performing a bubble rhythm but also some distinctly RnB riffs in the upper bass/lower treble clef, which use dotted rhythms to lead the major to minor chord change. A Rocksteady bass uses a drop beat riff, but is less chromatic in its melody, focusing more on the triad. Wah-wah guitars skank and the drums do a heavy, kick-led one drop with the hi-hats alternating between open and closed use. Snypahtak’s vocal is sultry and expressive, sitting between a soulful vocal and laid-back singjay – and the whole package is an extremely smart, deftly finished piece. It’s a joy to behold and also to hear an authentic Lover’s Rock track done so well. Perfection.

The EP finishes with a Dub version of Whine – again, with Smillie and Snypahtak showing that they’re totally up-to-date with regards to where the music is at, but also creating a completely different sounding track in the process.

Snypahtak is a talented artist and vocally he delivers assured performances across the EP. He has an impressive range, sitting between an upper baritone and high tenor. But it’s his delivery which truly impresses. Snypahtak is equally at home in a rich, resonant vocal – which effortlessly glides across runs and riffs without losing pitch or enunciation. But he also has a distinct singjay, which utilises complex rhythmic pattern and repetition, also making good use of intonation to accentuate his words. He’s also a strong lyricist, and has trodden that fine line between making message music and tracks which are aurally appealing well.

Time is Now serves as an inventive and solid project from Snypahtak and Total Satisfaction. Production from Smillie is top-class, seeing the label at the peak of its powers. The EP delivers a fully-rounded mix of Roots-derived music, which is often a rarity in modern releases. Moreover, it showcases Snypahtak’s ability as not only an artist but a lyricist, too. The project is pure class and a perfect summer release. Snypahtak Time Is Now EP Review by Steve Topple (22nd June 2020).