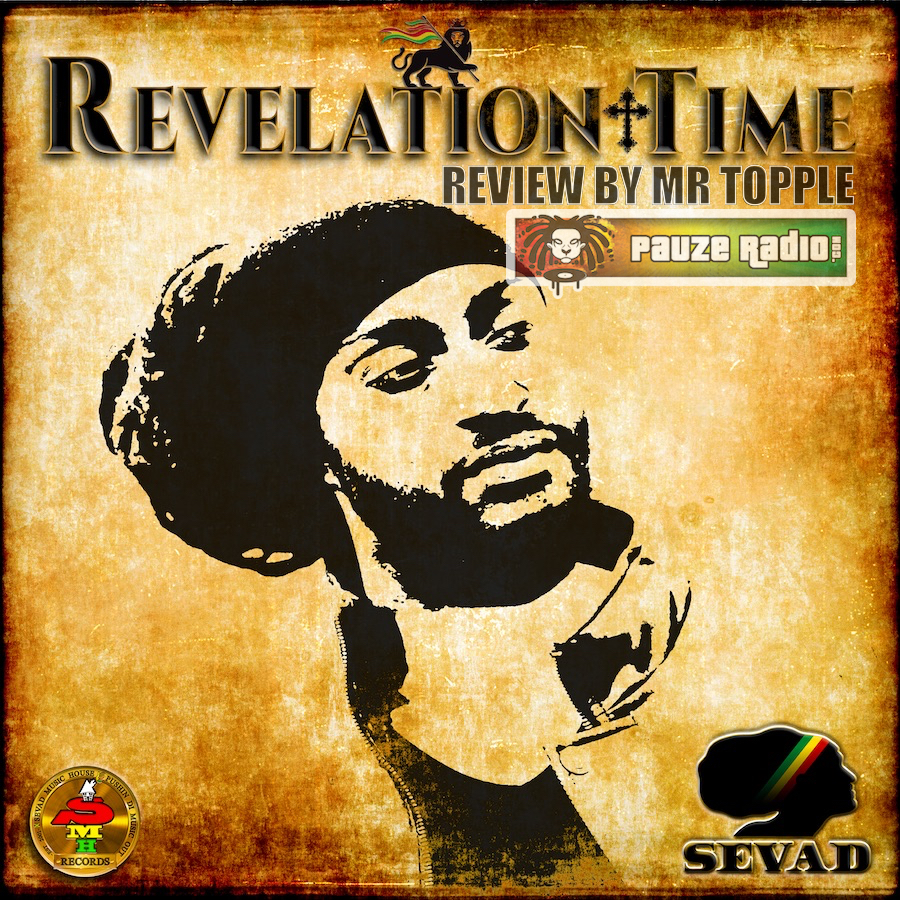 At Pauzeradio we value the notion of commitment to up-and-coming artists. So, it’s always a pleasure to come back to someone we’ve appraised before. But it’s even better when you can hear how the artist has grown since their last effort. Welcome back, Sevad.

Sevad Revelation Time, released via Sevad Music House Records on the 5th August 2020, sees this up-and-coming man strip his sound back to a more old skool, Roots affair – after the genre smashing witnessed on his album, Black Man’s Government. Heavy on Roots, light on fussiness, the track is created with several key elements in play.

The bass is the driving force across the track. Its sound is full and rounded, as it works across a drop rhythm, skipping the second beat of the bar. Sevad has arranged it in a more traditional manner – still syncopated, but with it’s melodic riff being limited to mostly notes around the root triad (aside from a delicious use of an A sharp/B flat at one point, which catches you off guard as it’s a semitone from the diatonic note in the scale). The bass provides the main thrust of momentum, and the dotted rhythms give Revelation Time some wind.

Keys roll on a bubble rhythm, again with Sevad employing a classic arrangement: the left hand dominates the offbeat chords, while the right does additional runs and a delicate countermelody. The drums are on a mashed-up one drop. Because while the snare accents the two and four, pushing the beat more towards the centre and end of each bar, and the hi-hats are on an incessant double time rhythm, the kick ignores this – double hitting the one and then the off between the three and four. This focus-shift between the start of the bar and the ups provides force to the track, as it means there’s not the usual ‘breath’ on beat one normally found in Roots. The combination of this rhythm section is an almost Rub-a-Dub sound – authentically old skool, but with the drums being deviants, bringing the feel up-to-date.

Additional instrumentation across Revelation Time works well – and shows Sevad cannot help but bring in extra elements, as was the case with Black Man’s Government. But fear not – it works. Not least among these is a soulful electric organ; vibrato turned up and running stretched-out, breve chords. The inclusion of a melodica, working off semi-chromatic melodies then chords, is a nice touch and a nod back to the traditional again. An additional electric guitar runs an octave-higher motif of the bass line. Meanwhile, Sevad has gone for again more authentic chord progressions – working off the root and the major seventh. But for added nuance, across the bridges he employs the fourth and fifth – which works well and serves as a pleasing break.

Sevad is a talented vocalist and lyricist – and here is no exception, He has technically skilled breath control across the track, which is one of the stand-outs. His voice is rasping but still rich, conveying the urgency of the theme. And his delivery is almost sermonic, as he muses on how the world is facing ‘end times’, which is probably a sentiment shared by many given the chaos we face as a society, species and planet.

But what really stands out on Revelation Time is the increase in production finesse from Sevad. On Black Man’s Government, he had a tendency to concentrate on higher kHz, when a low-pass filter should have been enhanced to give a less-tinny, deeper sound. On this track, this glitch has been smoothed out and the sound is rich and full. Also, Sevad has paid more attention to the dB levels of the various instrumental lines in the final master – making your ear hone in on his voice first, the bass second and then keys and additional instrumentation – with the levels of the electric organ being perfect, so it sounds almost out of earshot, but is still noticeable. This overall improvement is a real positive sign from Sevad that he is becoming the highly skilled artist he can be.

Revelation Time is a glorious effort from Sevad. Musically intricate but without being pretentious, the various lines are composed extremely well to end-up with good synergy. As a performer he is on-point – and the improvements in his production and mastering skills are noticeable. Solid works – and Sevad is shaping up to be a very exciting artist. Keep your eye on this revelatory man. Sevad Revelation Time will be available to stream and download on the 5th August 2020.