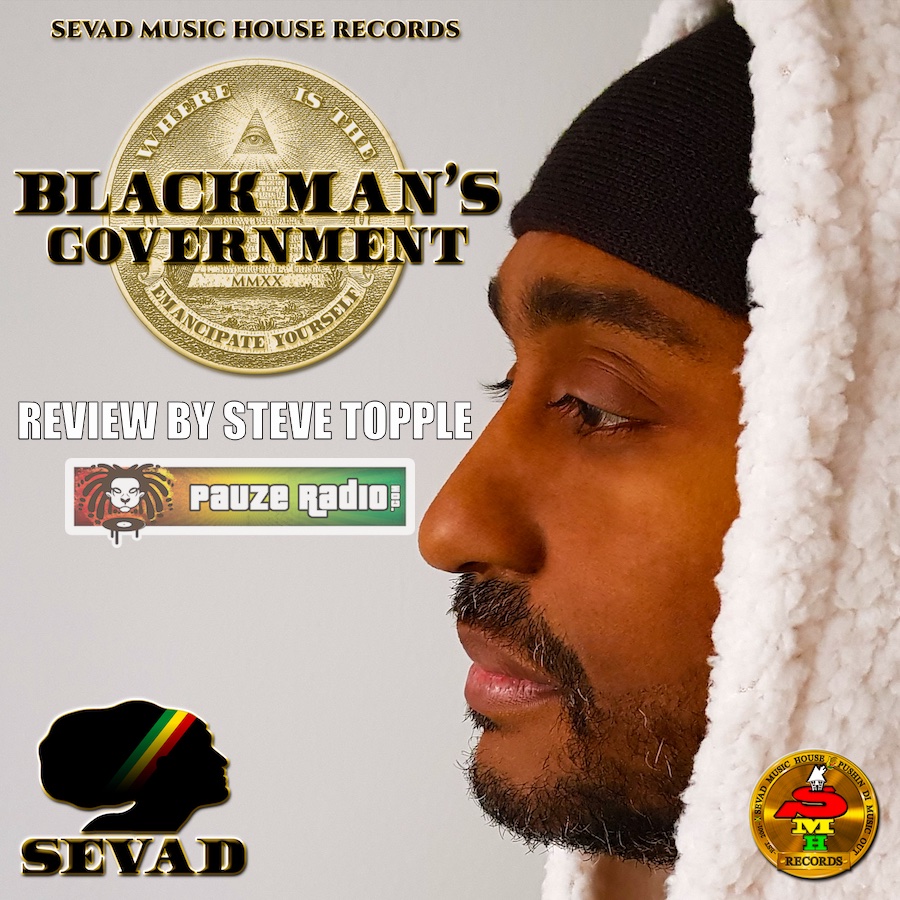 There are times in music when someone’s talent catches you off guard; when you don’t know what to expect, and that expectation is met with a pleasant surprise. The latest album from Sevad is the perfect example of this.

The album opens with Poverty by Design. It’s an amalgamated track, drawing on various genres to complete its package. The bass is slightly distorted, which creates a driving, unnerving sound while rhythmically it works off a six-beat clave, albeit without the usual Dancehall, closely beamed rhythm. Interestingly, the stuttering, offbeat Afrobeats percussion takes a back seat to the RnB keys, stabbing strings and Dancehall synths on the verses. But on the chorus, it goes into a partial one drop, albeit with a synth clapper again taking it into Afrobeats, while the bass becomes more syncopated, moving the segment forward at a more urgent pace than the verses. The whole track is utterly infectious, and well executed.

Next up is Rebel with a Cause. Sevad moves into Roots territory but not quite all the way there. The main driver of that Reggae sound is guitars on a constant skank. Also, the rhythmical arrangement of the main melody is full of beamed, then rapid double time syncopation, adding to the wind. But against all this is a straighter, more Hip Hop percussion arrangement, with the kick dropping on the first beat, then doubly on the third. Additional complex layers of instrumentation are then added: a synth organ dips in and out, while the keys drive a constant background melody. The bass is almost walking, and backing vocal line is an intricate, multi-layered affair. The sum of all these parts is a complex, musically deft Roots/Hip Hop track.

Black Man’s Government is again Roots, and far more traditional than the previous track. But, as is becoming apparent with Sevad, all is never what it seems. Because while the keys are more focused on a bubble rhythm, and the percussion is on a relentless, stripped back double time march, this is only for the chorus. On the verses, the style is flipped and moves into Soul territory. Acoustic guitars strum the root chords, strings are brought in, focusing on elongated breves, and the percussion goes onto just an upbeat focus. It’s a curious hybrid of styles, that kind-of sums up the message of the track well. And Sevad gives a pointed, powerfully delivered vocal performance. A pertinent track, especially in the UK at present.

We then go into Dancehall territory with The Struggle, and Sevad has gone against the current trend by not mixing the genre up too heavily with Afrobeats. The incessant three beat bass clave is pure Dancehall, while the percussion heavily focuses on the downbeats. Synth horns flit in and out, again framing the downbeats. Meanwhile, the keys bring in some Roots with their focus on the second and just-off the fourth beats. The track is utterly relentless, as is Sevad’s vocal, with which he shows off an impressive seven syllables a second at some points. It’s pure, manic, conscious dancehall.

Valentine sees the album move into RnB, taking you back to the early noughties, Nee-Yo and a late-career Joe. And after the music that’s comes before it, it’s a pleasant surprise. It’s well-orchestrated RnB at its best. The slightly grimy bass is prominent, lifting the track out of pure ballad territory – but Sevad can’t help but use a half-time Dancehall clave; the percussion on a mild one drop, with the hi hats and snare stuttering on the offbeats. The string arrangement is of particular note, as it’s used very well to accentuate the melody- taking a smooth, breve-led role on the chorus, but then running just before the verses and bridge. The use of synths lifts the track out of more Pop-led RnB, a vocoder adds some interest and Sevad’s flipping between a tenor and falsetto completes this love song nicely. A class affair.

Just for a complete switch-up on the last track, Sevad introduces some smooth Afrobeats into the mix with Never Look Back. While the genre is obvious, it’s mixed up with the use of strings and acoustic guitars. This creates a more RnB-driven Afrobeats sounds, as opposed to the other way around, which is more popular with Sevad’s peers at present.

It’s perhaps a measure of the creative potential of Sevad that he takes the RnB sound from Valentine and includes elements of it on Joy. But the track isn’t as straightforward as that. The double time percussion line, along with the kick’s double beat focus on the downbeats, creates a sense of something impending: it’s almost as if the track is going to break into Jungle, but never quite gets there. This is mostly because the bass is on a constant semibreve lick, not allowing the track to race away with itself. The keys are on quaver riffs, at times, and it becomes apparent that Sevad has a love of strings, as again they feature heavily. Joy is a cleverly composed piece, and again shows off the man’s vocal control and dexterity.

Keep You Strong is a change again, going back to Roots but with some clear Soca influences. Then, Marley gets a nod on What Type a World. It’s a stripped back Roots track, with the one drop percussion line being more embellished with frantic rolls dropping throughout. The keys’ bubble rhythm is pointed, the bass is constantly on the move, the whining electric guitars glide across bars into high-pitched crescendos and Sevad’s singjay vocal is angry and almost chant-like. It’s an impressive tribute to Marley, and shows Sevad equally at home in traditional Roots.

Loving You is a curious creation, which is hard to pin down. So, the guitars perform a kind-of reverbed, double-time skank, which lulls you into a false sense of Roots security, as does the percussive focus on the upbeats. But the track isn’t boxed in just there. The string arrangement is at time on a triple time, staccato riff; soulful horns play a juxtaposed melody to Sevad’s. The bass line is also interesting, cutting in just before the start of the bar. It’s almost an RnB-feeling track – but again Sevad’s vocal shines, with that effortless gliding between tenor and falsetto, with some vocoder used for good measure. Gorgeous.

Black Man’s Government finishes with It’s Time. The track is perhaps the most interesting of the album; not least lyrically as it pays tribute to Haile Selassie. The percussive arrangement is a direct nod to the Motherland and more traditional Afrofolk music. The frantic strings play staccato, triple time riffs, focusing on the root of the chord. But melodically a feeling of sparseness is created by the lack of a prominent bass and any keys. It’s Time almost feels like a chant across one chord, when it’s actually not. The acoustic guitars, with their folk arrangement, lift the track away from this. But overall, it is a tribute to not only Selassie but traditional African music more broadly. And it’s a smart, detailed piece of composing to finish the album.

The record concludes proper with an acoustic version of the title track, which serves to once again highlight Sevad’s impressive vocal ability.

Sevad is a powerful songwriter (with a talent for an ‘earworm’ melody), vocalist and arranger. But it would be irresponsible (and unproductive) of me to ignore the fact that the production and mastering is lacking some finesse. Don’t get it twisted: there is nothing inherently wrong with it. And it’s important to distinguish between intentional over-production (like the grimy bass on Poverty by Design) and when it’s more about the equipment and Sevad’s own skills. But the album needs a fine-tune, as sometimes the dBs across the various instrumental lines are not quite balanced right. This at times creates too complicated a sound, with no discernible driving instrumental force. Plus, the end product is somewhat ‘tinny’ and could have done with more low-pass across it to dampen this down.

But that is my only complaint about Black Man’s Government. Sevad has created a remarkable project. The use of musical devices and influences from across the spectrum of Roots-inspired genres is worthy of a major label. There are delicious elements on every track, often taking you by surprise. And the album’s lyrical and thematic construction is top-class. The themes explored and messages delivered on tracks like Poverty by Design and the title cut are impressive, and Sevad’s poetic yet stark lyrics give repeated pause for thought.

Moreover, Sevad is a skilled vocalist, who has a naturally rich and compelling sound, along with intuitive phrasing and rhythm. Black Man’s Government is a hidden gem of an album. Now – can someone please give this man a contract and a team? Because if he had that, who knows where this exciting and versatile artist could go next. Sevad Black Man’s Government Review by Steve Topple for Pauzeradio.com.