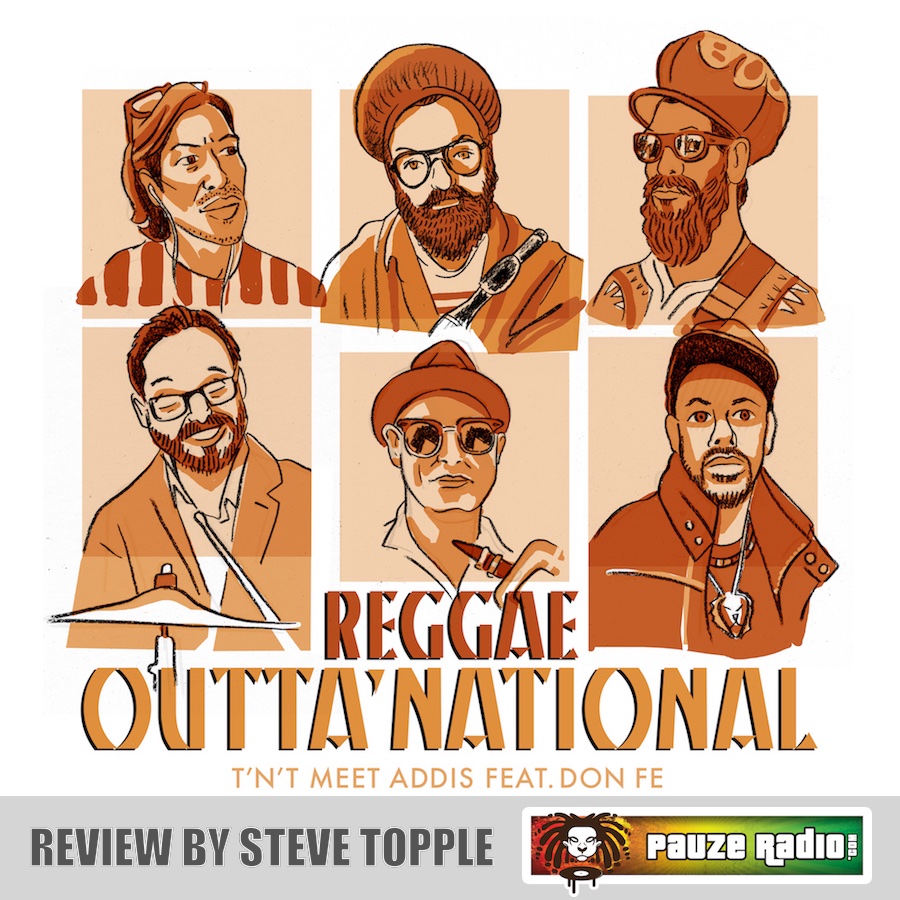 Every so often a very special riddim comes along which has such depth and character that it stands head and shoulders in line with some of the greats. But moreover, the label from which it comes goes that extra mile to make it all the more spectacular. Enter Addis Records.

Reggae Outta’national Riddim, released via Addis Records, is not so much a riddim and more a musical theme. There is a basic riddim in place, jointly composed by Thomas Join Lambert and Thomas Broussard (aka T’N’T) on drums and guitar, “Stuf” on bass and “Jil” (Gilles Geuggis) on keys, who also does arrangement duties. Then, further to this are additional instrumental lines. And further still are four, unique interpretations. There needs to be no questioning of the quality of production – as this is Addis. But the inspired move to instrumentally diverge from a base composition is what’s central to this.

The basic rudimentary elements are all there – but not ostensibly Roots. In its stripped back form, Reggae Outta’national riddim consists of several factors. Keys tread an incessant bubble rhythm, the most discernible factor of Roots. Drums avoid a one drop: the hi-hats and snare alternate, with the latter providing rim clicks on the upbeats. But the kick is persistently hitting double time beats – driving the track forward, making it on occasion feel twice the BPM it really is.

The bass works around and in between the root triad, but on an unusually fixed rhythmic riff: four quavers, one dotted quaver, three semiquavers and a quaver (‘one-and-two-and-threeeeee-and-four-and-a-). A second guitar line works the same melody but an octave higher (starting on the root E below middle C). This interesting quirk detracts from the heavy, deep bass sound usually associated with Roots – and gives space for the other elements, and ultimately the different performers, to breathe.

It’s this basic structure which is present across the four interpretations. And from here, the musical themes are expanded upon.

Two artists’ performances are based across the same, enhanced musical arrangement of Reggae Outta’national: Hardio and Mark Wonder. These tracks are heavily guitar and horns-orientated. The latter, led by a sax from Guillaume Stepper Briard, opens proceedings with a multi-harmonised refrain – a key melody in the various interpretations. It’s overly Funky Soul in its arrangement: working around the minor root chord, then the major fourth and the major sixth, the on-beat then dotted rhythmic pattern adds to this vibe. The horns then interject throughout Hardio and Wonder’s versions – not least an instrument-waving, syncopated bridge and some pointed, funky staccato breaks.

“Bubbler” (Franklyn Michael Waul) brings in an electric piano, doing elongated chords over the horns’ intro. It then returns for a highly syncopated riff sequence about halfway through just before the horns’ funky bridge. But it’s a secondary line compared to the horns – and also the additional electric guitars. Funky from the off, they work around the chromatic scale on the riffs, doused in bends and vibrato – again bringing elements of Soul into the mix. All these elements across the various instrumentation serve to turn Bossbwoy and Wonder’s versions into a Funky Soul/Roots hybrid. But Addis don’t do things by halves – and even both artists’ versions have yet more intricate differences.

Hardio’s version, Bossbwoy, sees a distinct nod to Dub across the track. The role of the guitars has been played down; the verses stripped back just to bass and percussion, with the keys’ bubble rhythm gone except for the odd moment of heavily elongated reverb and decay obliterating them. The horns’ role stays fairly similar but even they’ve been compressed and decayed at points, while added samples enhance the Dub vibe. Bossbwoy becomes a track full of musical light and shade, with otherworldly Dub sections contrasted by more driving Roots/Ska parts. And Hardio’s expressive and technically detailed performance just enhances this – with top class intonation, dynamics and enunciation.

Enter Mark Wonder, and Addis mix things up again with his cut Rebel. The electric guitars take a more prominent role, with a driving riff during parts of the verses – partly imitating the bass’s line. They also skank at times and add in more, chromatic riffing than on Hardio’s version. Rebel is also slightly more orchestrated, avoiding stripping verses and bridges back to Dub-levels. The backing vocals on both tracks are layered harmonies, but Wonder’s are more involved – working off vowel sounds which would be very at home in Funky Soul. And of course, he does a fantastic turn as well – with his smooth, soulful voice issuing a pertinent and strongly delivered effective ‘call to arms’ for all conscious people around the world. Sublime work from both.

Addis then goes Dub-heavy with Reggae Outta’national. It takes the opening melody performed by the horns on Bossbwoy and Wonder’s cuts and mashes it up. Heavily compressed and reverbed, they appear at the start but fade out. Appearing again in their original form at points, the horns are then compressed/reverbed at other points. The track then uses the same bass riff, keys’ bubble rhythm, percussive hook and elements from Hardio and Wonder’s versions – like the heavy electric guitar mimicking elements of the bass’s riff. The electric piano is also used. But the point is – this Dub version takes the basic elements, mashes them up and strips them back – creating a haunting, dream-like interpretation with peaks and troughs of sound and instrumentation. And it seems the reason for this is to give a platform to another featured artist.

The real masterstroke of Addis was to get legendary Don Fe involved. He works across T’N’T’s Dub version to break loose his virtuoso skills. And he’s as enthralling as ever. It would be remiss to label Fe’s performance as ‘Roots’ – as technically it fits a bracket somewhere nearer Blues and Jazz. His arrangement and improvisation work almost exclusively around the chromatic scale – flitting between semitones with a moments notice. Rhythmically, it’s complex too. He cleverly alternates between a main, heavily dotted melody (more reminiscent of Roots) and straighter demi-and-semiquaver runs, staccato breaks and flutter-tonguing, fitting with Blues/Jazz. It goes without saying that Fe’s technique and performance are exceptional; suffice to say his flute has all the hallmarks of a human voice. But his cut also shows T’N’T and Addis’s exceptional skills at composition. Because it’s versatile enough to fit with both Funky Soul and Jazz/Blues interpretations.

There’s a stroke of genius in Addis Records’ Reggae Outta’national Riddim. By taking a basic yet solid rhythm section structure, and then embellishing it dependant on the artist involved brings a personal element to each cut. Then, picking the performers to ensure a multitude of styles are covered enhances this. And the end result is a four-track masterclass in producing elegant and intelligent Roots-derived music. Sensational.