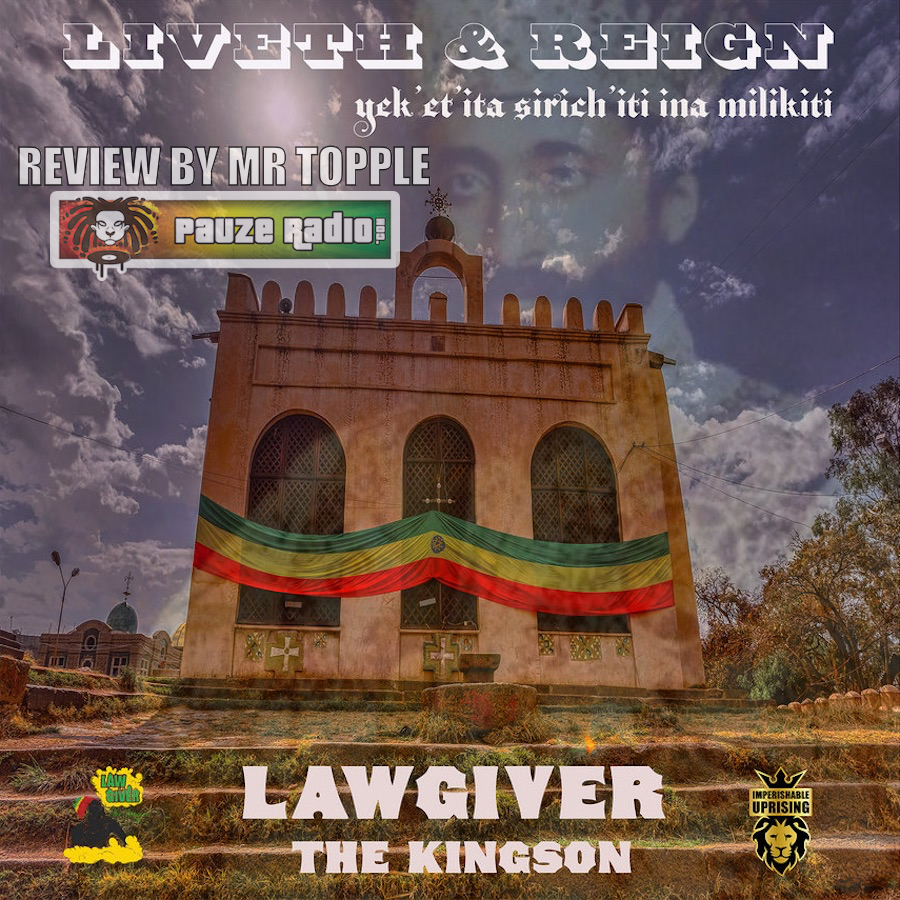 LawGiver The Kingson: Liveth and Reign Single Review by Mr Topple for Pauzeradio.com.

Ahead of the release of his new album, LawGiver The Kingson has just dropped the second track from the project. And if it and his previous single are anything to go by, it’s shaping up to be an impressive release.

LawGiver The Kingson Liveth and Reign, released via Imperishable Uprising, sees Lawgiver again team up with Cleveland “Clevie” Browne, Owen “Bass Face” Rennalls and Kardi Tivali. What stands out first is that the track is completely different to LawGiver’s previous release, Jah Neva Fail I – boding very well for the album. This release also includes a Dub version.

This new track is brooding, heavy and pacey, as opposed to Jah Neva Fail I’s lightness and more Reggae-led vibe. Central to this is an imposing bass line. Melodically, it works around diatonic notes, creating an almost additional vocal line. Rhythmically, it uses a varying drop-beat rhythm, at points missing the two and three, with the focus at the end of the bar being on a semiquaver run. It’s sound is deep and rounded, creating a drive to the track. But what LawGiver and the co-producers have also done so cleverly is mimicked parts of the bass with an electric guitar. Using these motifs with the mid and treble of the amp wound up along with a wah-wah pedal has embellished the bass’s line, creating something quite ominous and unsettling. It’s a smart and effective way to not only create momentum, but also brings atmosphere to proceedings.

Liveth and Reign’s percussive line is particularly interesting. After the intro, it opens with just some djembe drums tapping out an almost inverted skank on a rapid ‘one-twooo’ rhythm. Then, the drums come in proper. The kick is interesting, at times following a one drop standard (hitting the two and four) and at others deviating off onto imposing double time beats towards the end of the bar. An open-skinned snare doubles up the two and four, while hi-hats perform a repetitive double time riff.

The horn section is particularly accomplished. It avoids the straight octave separation often found in Roots/Ska, instead opting for layered harmonisation but with all the swing and stomp that the genres are known for. Their use is sympathetically sparse, which allows the sax, from Dean Fraser, to take centre stage. It’s gorgeous – offering up a diatonic countermelody to LawGiver’s main one. Just to compete with the horns, there’s a nice melodica line which weaves intermittently in and out, offering an almost vocal response to the melody’s call.

On top of this, an electric organ runs delicate chords – almost out of earshot but noticeable enough to signpost the melodic progression of the track. Then, keys perform a stark bubble rhythm, their sound being higher up the kHz scale to again bring edginess with the occasional lightest of touched reverb and decay added. Their use is only intermittent, though – and this pared-back use, like the horns, encapsulates what else works so well on the track.

The structure that the team has created in Liveth and Reign is powerful. By fluctuating between stripped back phrases with reduced instrumentation, to heavily orchestrated choruses and verses, the track builds emotively, reaching a crescendo before a stark bridge with just the bass, sax and the main vocal moving around one another’s lines. It then remains smoother and stripped back – giving the main and backing vocals the final flourish. Expertly done, as are the backing vocals – combining elements of Soul and Doo-Wop to create a hybrid, fulsome sound (the ending “Se-Se-Se-Se-Selassie-I” being particularly effective).

LawGiver The Kingson is a talented performer – evidenced across the different styles he employs in both this and Jah Neva Fail I. His vocal skill is now cemented, and needs little commentary. But here, he’s more abrasive and direct – working off a series of complex rhythms, using triplets, crotchets, quavers and semiquavers along with dotted notes sitting in between these. What clever about his performance is that the rhythmic intensity increases as the track moves forward. And his timbre is unrelenting: forthright, somewhat indignant yet still compassionate – rarely falling below a high dynamic. It’s powerful stuff, which compliments his sprawling, pointed lyrics well – as he muses on personal and collective faith as the world metaphorically and physically burns around us.

Liveth and Reign is another quality release from the ever-evolving LawGiver The Kingson. His style continues to be classy and compelling. And if this and the previous single are anything to go by, then the album is set to be scintillating.