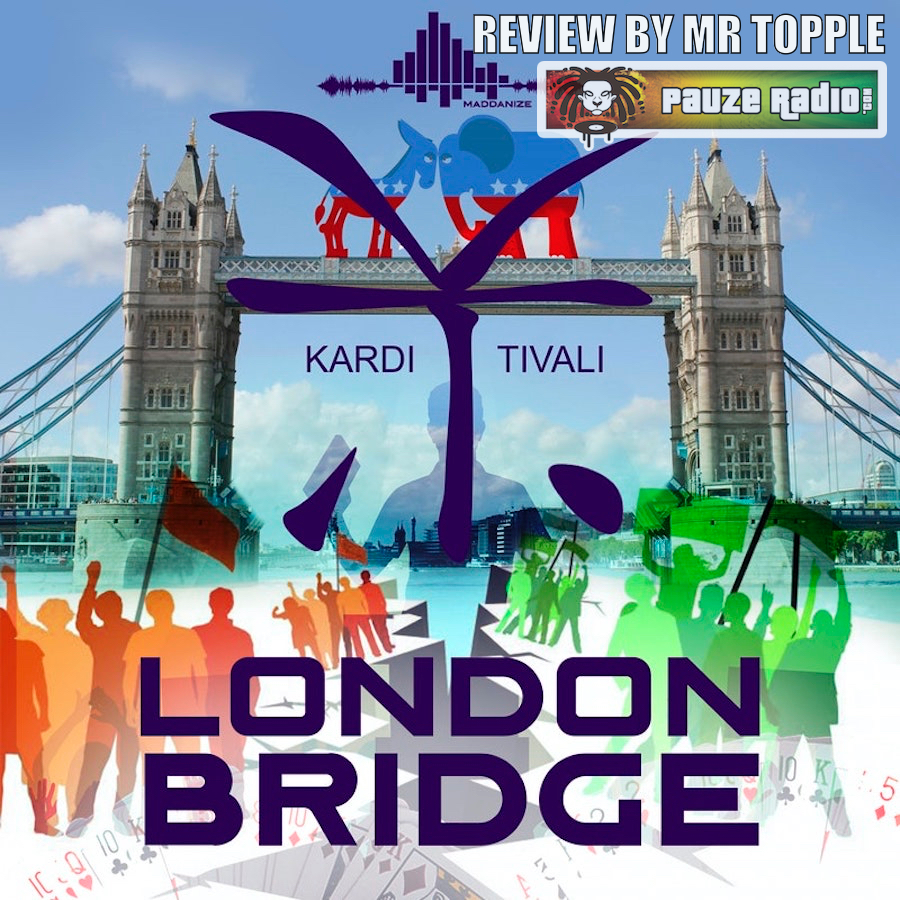 Kardi Tivali was recently back with another new track. Here, he stops off at AfroDancehall – but cleverly uses the genre to deliver a searing political and social message.

Kardi Tivali London Bridge, released via Maddanize, sees Tivali continue on his journey into AfroDancehall territory. Somewhat less brooding than his previous tracks like Move The Bar and Struggling (with William Vybz), it’s no less affecting – just with a lighter touch across the instrumentation.

It’s fresh, contemporary AfroDancehall. The percussion is the driving force, with the snare on that signature “two-and” rhythm. There’s delicious, additional rim clicks through the right input, almost out of earshot – but there, across delicate semiquavers. The additional inclusion of a tambourine on the second snare hit creates a shimmer. And the kick focuses on the downbeats at times, then at others hits every beat including some doubling up. Additional tom-toms enter on the bridge, and overall, this creates a driving but no overbearing sound – and brings the Afrobeats elements home.

London Bridge’s bass is rich and resonant, and interestingly on the chorus uses a full Dancehall clave (‘oneeeeee-twooo-and’ x2), often broken down in modern AfroDancehall to just a ‘oneeeeee-twooo-and’. But Tivali has removed it from the majority of the verses – leaving the other instrumentation, and his voice, to take centre stage.

Tivali’s additional instrumental lines are all well-arranged. Keys run chords, driving the shifting melodic progressions. Strings feature quite heavily: compressed, reverbed and running whole notes across the bar – which brings a nice smoothness to proceedings. But Tivali then flips this up, using them on double time, plucked notes. And across the second verse, the run an attractive countermelody to his main one. Meanwhile, acoustic guitars run elongated arpeggio, then full, chords – nodding to AfroDancehall’s Afrobeats and Roots heritage. And there’s a glorious use of a bell on the chorus, almost echoing Big Ben.

Overall, London Bridge is an intricately arranged track from Tivali, with a lot of quality attention to detail. His vocal, meanwhile, is excellent too.

Eloquent and erudite, he has a very attractive voice – sitting nicely in both singjay and straighter vocal. Rhythmically, much of his performance displays good levels of complexity – with some brilliant use of repetition and then variance on rhythmic patterns. He has a strong vocal range, gliding around a full tenor, and moves between almost a whisper to a louder dynamic well, to fit the lyrical content. And these lyrics are absolutely brilliant, too.

Tivali has given an ingenious take on the traditional nursery rhyme, taking the literal sentiment but putting it into a system-smashing context. He pulls apart with ease the politicians and corporations who govern us, and rips into their evil and self-serving agendas. As he sublimely says:

And a tell we dem a Nobel prize winner.

Jamaica tired a the lies inno,

The country still nah ketch up,

If there were to be one piece of constructive criticism it would be on the engineering. Tivali hasn’t quite struck the balance of kHz right. The focus is on the higher register instruments, which while making the track light also creates a slightly abrasive sound. He could do with using the low pass filter a bit more, and bringing up the bassline slightly in terms of dB to create a richer sound – as is generally present in AfroDancehall. But this is a small point, and would elevate the track just that bit more.

Otherwise, Kardi Tivali London Bridge is a very solid piece of work from Tivali. It’s musically detailed, showing him as a talented composer. He’s also a strong performer, too – and lyrically is on fire. Another quality piece of work from this blossoming artist – just fine tune the production and it would be star quality.