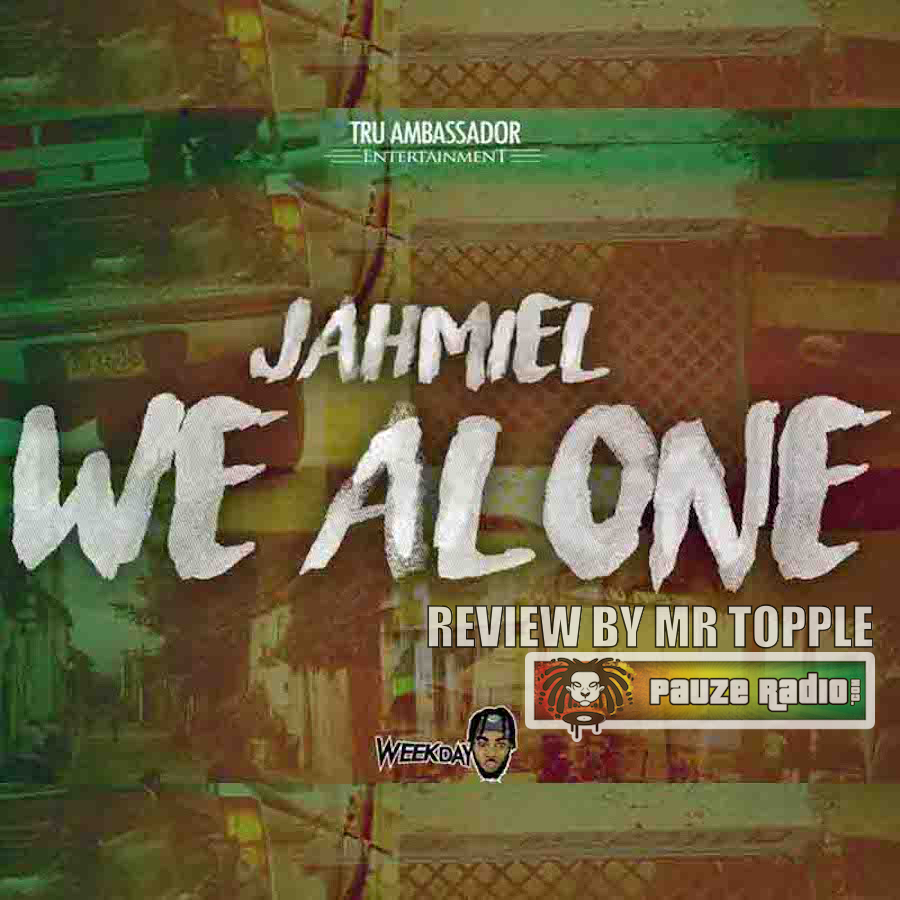 Jahmiel: We Alone Single Review by Mr Topple for Pauzeradio.com.

What happens when you put one of the busiest and most-talented artists around, and one of the most exciting producers going, on the same track? Perfection, obviously.

Jahmiel We Alone, released via Tru Ambassador Entertainment, sees Jahmiel team up with Week.Day on a glossy, slick yet unpretentious Afrobeats-RnB cut. As a producer, Week.Day’s skill at engineering a cleverly intricate song is no longer in question (his earlier work this year with Julian Marley and Kumar to name two, other sterling examples). So, what about the composition? Top-class, of course.

The merging of Afrobeats musical devices with more RnB elements is efficiently done; creating an ‘Afroballad’. We Alone has several driving forces, the first being the rhythm section.

The drums are intricately layered, creating a recognisable Afrobeats vibe. A kick hits direct on the first beat of each bar, then just before the second, and doubles just before the fourth; its use across the whole bar being pure Afrobeats. Snaps are the opposite – usually clicking just after the second beat and then direct on the fourth. Hi-hats gently rattle, closed and open, bouncing off the downbeats, with a buzz roll just before the end of the bar. The snare performs variations on a half Dancehall clave (oneeeeee-twooo-and), and the bass mimics this rhythm, working off an unfussy melody around the root of the chord. It’s Afrobeats personified – and the foundation of Jahmiel We Alone.

But it’s the additional instrumentation that Week.Day has crafted which elevates the track into classy RnB territory. Acoustic guitars are sparingly used, running arpeggio (broken) chords with riffs at the end of the phrase. What sound like dampened and compressed horns are also pared right back, hitting chords on the first beat, and then the off before the third – which serves to enhance the stuttering rhythm section and add yet more momentum, but without over-embellishment.

Pizzicato (plucked) strings tinker in and out of the verses intermittently, working across dotted and full quaver rhythms and diatonic notes. But the joy of Week.Day is his attention to detail – as the strings return during the chorus, but this time arco (bowed) while still being staccato (short). It’s a clever use of musical technicality, as it creates additional fullness of sound during the chorus, and momentum during the verses.

The piano line is deftly composed – and serves (along with the rhythm section) as We Alone’s musical cornerstone. At times it does a semiquaver/quaver-led countermelody to Jahmiel’s main one, across the treble clef (all very RnB, as it runs up and down the scale). On other occasions it breaks out into cinematic, grandiose root chords, utilising a full range of both clefs. Moreover, it sometimes uses the same melodic riff as the strings – and the two lines together work in cooperation on the chorus, doing rapid calls and responses, often one beat after the other. The string and piano lines are exceptionally well composed by Week.Day – and are one of the song’s highlights.

The overall construction of the track, stripping back the instrumentation at the start of verses, is a sympathetic move towards the lyrical content – and drives the infectious, complex chorus home. It’s engineered perfectly to give balance towards the higher frequency instruments, keeping the track gentle and light, while still having Afrobeats depth via the bass and kick. The whole package is brilliant – and gives way for Jahmiel to effortlessly do his thing.

He is one of the world’s most exciting artists; consistently breaking moulds and pushing artistic boundaries – and here is no exception. The use of Week.Day’s composition as a platform to give a conscious and inspiring performance is Jahmiel all over. He glides around his impressive tenor vocal range, utilising the rhythmic repetition and embellishment found in singjay to good effect. But with Jahmiel, it’s his lyrical interpretation which always impresses. He makes intuitive use of dynamics to mould and shape the flow of the lyrics, creating peaks and troughs of sound depending on what’s being said. And his use of breathing – extending certain phrases while clipping others – is gorgeously and technically-well done. Jahmiel’s lyrics are stirring as well, as he offers a narrative about how we, as a species and society, are divided and pitted against one another. When, in reality, ‘we alone’ have the power to be so much better.

As he muses: “Why some affi rise and some affi fall. But we all can rise, and all help all. I see conflict in big and small, where the strong think the weak means nothing at all”. Jahmiel delivers the message of unity, cooperation and collectivism with passion and sincerity – and his conviction to what he’s saying finishes of the whole package perfectly.

We Alone is a quality offering from Jahmiel and Week.Day. It showcases the young producer’s extraordinary skill as a composer and arranger (in fact, possibly one of his best this year so far) – not least because of the sheer attention he gives to musical construction and instrumentation. And Jahmiel is on-point – delivering a consistently assured, lyrically strong performance throughout. Really exceptional work – with both men ‘reaching for the stars’ as always.