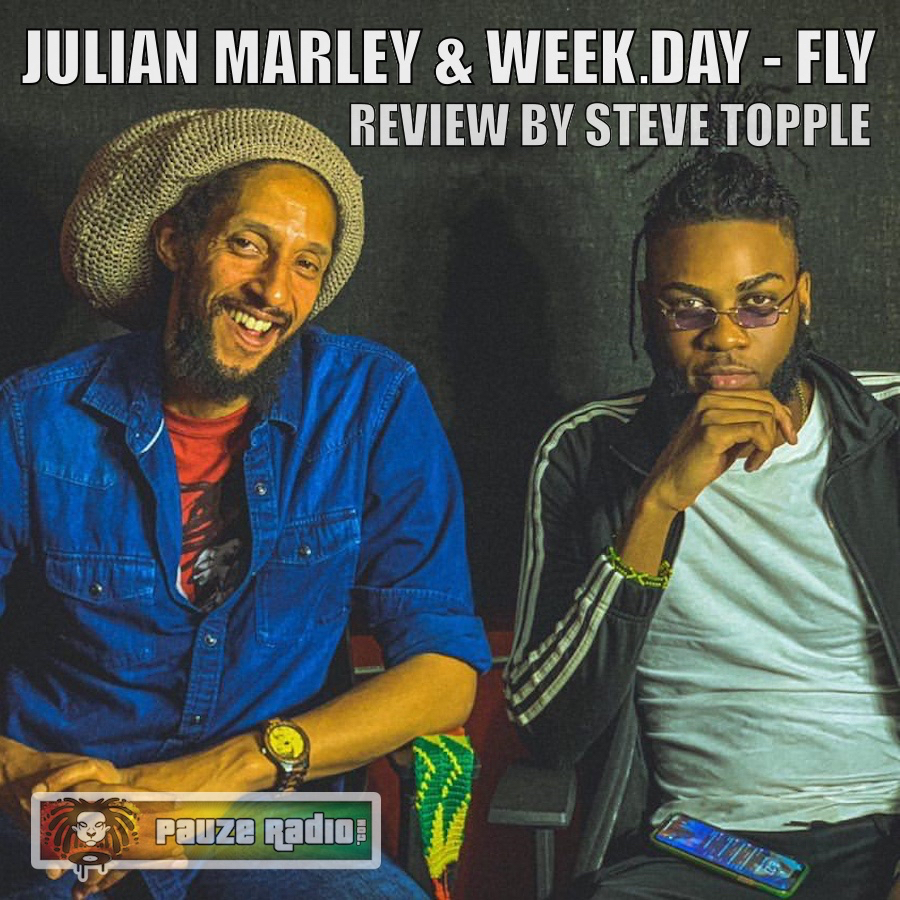 Sometimes a producer comes along who you just know is going to blow up. And 2020’s potentially hottest talent is Jahvanie ‘Week.Day’ Morrison. So, Pauzeradio has got an exclusive on his forthcoming track with the legendary Julian Marley. Will it be worth the wait until 17 April? Absolutely.

Fly, to be released via his label Tru Ambassador Music, sees Week.Day and Marley delve deep into smooth Afrobeats RnB. The track has been pitched perfectly for an early spring release. Because it’s light, full of feel-good, summery vibes and blissed-out production. But moreover, the composition is instantly memorable, making Fly a potential anthem.

The arrangement is bang-on trend. Percussion focuses heavily on the Afrobeats device of stuttering, offbeat accents. Because while the kick takes a lead, focusing on each beat, the snare does a beamed riff on the ups and a washboard drops in on occasion. Meanwhile, the bass hits the first beat of the bar, again serving to provide further momentum. But it holds this note until the fourth, where it comes in again, then goes straight into the first beat of the next bar – and so on. The balance of this rhythmic arrangement across the percussion and bass creates the effect of driving the track forward, but not so hard that it runs away with itself.

As a whole, Fly has been cleverly arranged on top of the basics of the percussion and bass. It opens with the Afrobeats-standard distorted synth doing a heavily beamed riff; immediately we’re hit with the chorus, just to drive home that earworm. A synth kalimba is then introduced as are electronic keys. Into the first verse, and after four bars there’s a pointed break, with the instrumentation stripped back – a musical device which is used throughout. This helps you hone in on Marley’s vocal.

The second verse works off a different melody to the first. This is an important point to note: it creates the aural effect of giving musical variation to the listener. But it also then drives home to us the recognisability of the chorus. Another bridge, and while the instrumentation is stripped back again, the rhythmic focus changes, heavily accenting the upbeats. This, along with the call and response backing vocals and use of a vocoder adds to the momentum into the next phrase. The second round of the chorus is embellished further, with distorted strings coming in on stabbing, double time riffs. This layering continues until the closing bridge, where the vocal arrangement blossoms to a final flourish.

Week.Day is an extremely talented composer, arranger and producer. The first two skills are clear on Fly, his work on Usain Bolt’s Olympe Rosé riddim and Kumar’s recent cut Remember Me. But his production is also of stellar quality. It’s a fine balancing act, creating a track which has both forward momentum but is also blissed-out. But Week.Day has easily accomplished it with Fly.

The use of a low pass filter creates a smooth, mellow sound with nothing too tinny. The exception is the strings, where the wave distortion and delicate high pass create that almost EDM, gritty sound. Moreover, the intricate monitoring of dB levels means that the focus is partly honed in on both the bass and kick, with the Afrobeats synths playing second fiddle. But Marley’s vocal has also been cleverly engineered to give it prominence above the rest. It’s a slick, finely tuned piece of work; much like the vocal of the artist himself.

Given much of Marley’s musical focus is Roots, his versatility is displayed extremely well on Fly. He effortlessly glides across the intricate melody, which utilises his vocal range well. His delivery is in keeping with the track’s aims: light, airy but still with forward motion. And he is wholly expressive, using clever intonation and phrasing to punctuate the lyrics. Moreover, the track lends itself well to Marley’s pleasing performance technique and would be superb with an audience present.

Fly is a top-class release from Tru Ambassador Entertainment. Not only does it showcase Marley’s multitalented skills well, but it is an exceptional creation from Week.Day, both musically and production-wise. He is undoubtedly one to watch in 2020 and beyond. Julian Marley Week Day Fly review by Steve Topple (7th April 2020).