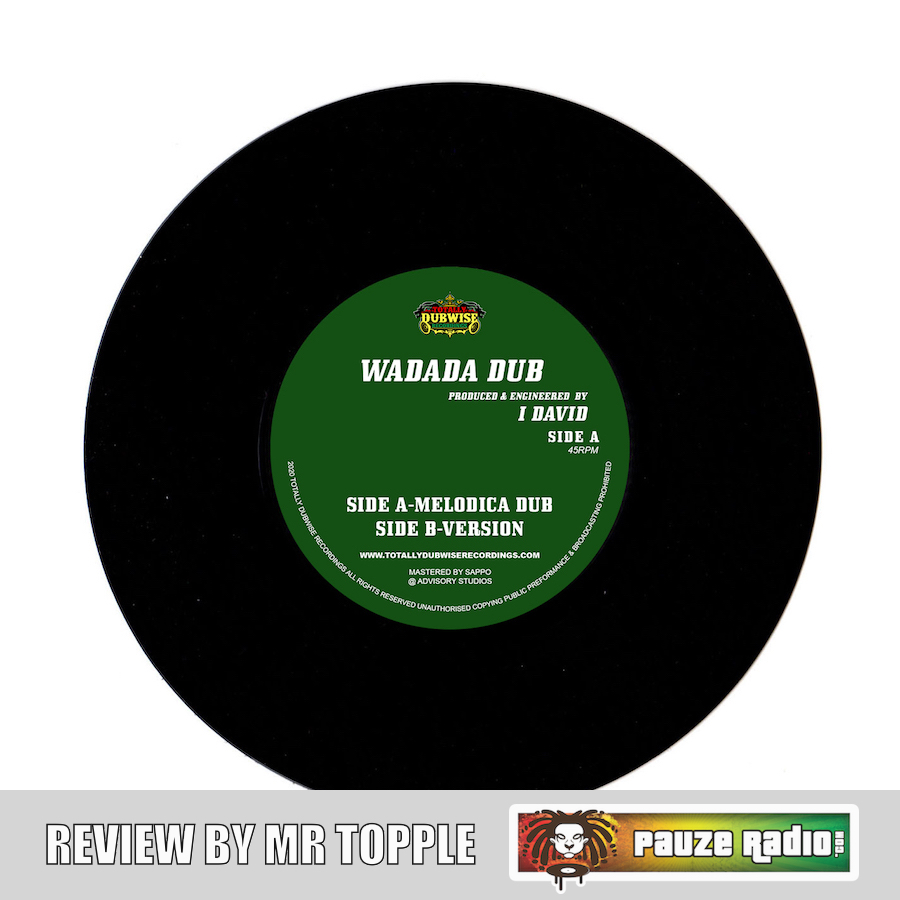 What better way to finish off 2020 with a gorgeous piece of instrumental Roots, from one of the UK’s leading producers? An easy request to fulfil, when I David is involved.

Wadadda Dub, released via Totally Dubwise Recordings, is glorious. Solely performed, produced and mixed by UK musical stalwart I David, and with mastering from Sappo, the limited press 7” vinyl offers a thoughtful, reflective and rich experience to close the year with.

It’s an expertly executed piece of music. Side A’s main version is the Melodica Dub, which is rich in detail but still with some rudimentary elements in play. Its opening is grandiose: a multi-instrumental motif; first elongated across chords, then moving across a pared-back melodic riff. The track begins proper after this, but doesn’t dive into proceedings delicately. Instead, it starts as it means to go on: distinctive Roots devices coupled with clever levels of detail.

The various key-based instruments are central to Wadadda Dub’s focus. A piano works around a bubble rhythm, with the right hand focused on the lower end of the treble clef. At times it performs mainly chords, but at others it breaks off into melodic riffs, which interestingly are then also echoed by the left hand in the bass clef; a quite unusual piece of arrangement for Roots. I David at points has added brilliant touches of seeming reverb. But they’re so precisely done in terms of their rhythmic pattern that you have to wonder if it is engineering, or if they’re piano performing like it’s had reverb added. Quite special.

Secondly, parallel to the piano is an electric organ, which tends to run a half-time bubble rhythm on the upbeats as opposed to the offs. Its vibrato is turned up to make the chords quiver, and they are punchy and staccato. At points, it also veers away from this into the realms of funky melodic riffs at the top end of its treble clef. Thirdly, there’s a curious synth which brings an otherworldliness to Wadadda Dub – arranged and performed like a piano but with the sound of chimes. Either way, it too does its own thing, with a gentle and syncopated countermelody, tip-toeing away in the background at a juxtaposition to the piano and keys more rhythmic arrangement.

Wadadda Dub’s main rhythm section is overly Roots. The drums are ostensibly on a one drop, where I David has opted for unfussiness in their arrangement. The kick drives the two and four along with the snare, while hi-hats run dotted rhythms in between. It’s a clever move from him to keep the drums pared back in terms of intricacy, as it draws the ear to the other, richer lines. The occasional cymbal crash, along with a well-placed vibraslap and some fluttering bongos give all the curiosity that’s needed here. And the bass follows a similar path.

Its role, like the drums, is to take charge of the pace and beat of Wadadda Dub. It enhances the drum’s one drop by skipping the first beat on bars one and three of each phrase during what would be called the verses and chorus. The rest of its role is a mixed bag of dotted and straight notation, melodically focusing on the triad chord of each progression. But on the bridge, the bass becomes more active, building with the rest of the instrumentation to the track’s final crescendo. Of note is that I David has, much like the drums, not engineered the bass to be overpowering in terms of dB and passing. Again, this serves to push the other instruments to the fore – and in Side A’s case, allows the main melodica line to take centre stage.

I David is well-know for his work with this instrument (take a listen to Chain Gang Dub for a good example). Here, his reputation for quality precedes him and the melodica is used to its full capabilities. Aside from the very attractive and emotive melody, I David takes you across the full spectrum of the instrument’s pitch, moving up and down the treble clef with ease. He employs very good use of rapid work between semitones, brining some Jazz sensibilities to the performance. His tonguing on the instrument to achieve rapid triplet demisemiquavers is impressive, without losing notation or pitch. I David also adds crescendo and decrescendo to mimic a human voice, bringing depth and soul to the performance. He veers between staccato and legato notes, again in an almost singing style. And there’s the occasional, fleeting but well-executed glissando, too. It’s an extremely sensitive yet assured performance, wholly befitting of its musical backdrop. It should also be noted that the inspired composition from I David is particularly strong around the differing melodic motifs that he’s used across the main instruments: all being different, but all coming together in perfect synergy.

Side B of the 7” is the Dubbed Mix. Without giving too much away, I David has taken his main composition and almost ran away with the brooding and slightly haunting narrative built in the main version. The emphasis shifts to compressed and high-passed percussion at points; the piano line plays a more dominant role at others – and it’s an impressive expansion of the main track’s theme and arrangement.

Wadadda Dub is a very strong piece of work from I David. The quality of the overall composition is really first class – showing not only his technical and artistic skill but also how effective exceptionally constructed Roots can be. His melodica is undoubtedly the star of the show – but it has to share this role with the overall arrangement and theme. Solid, moving works and a very pleasing climax to both I David and Totally Dubwise’s year.