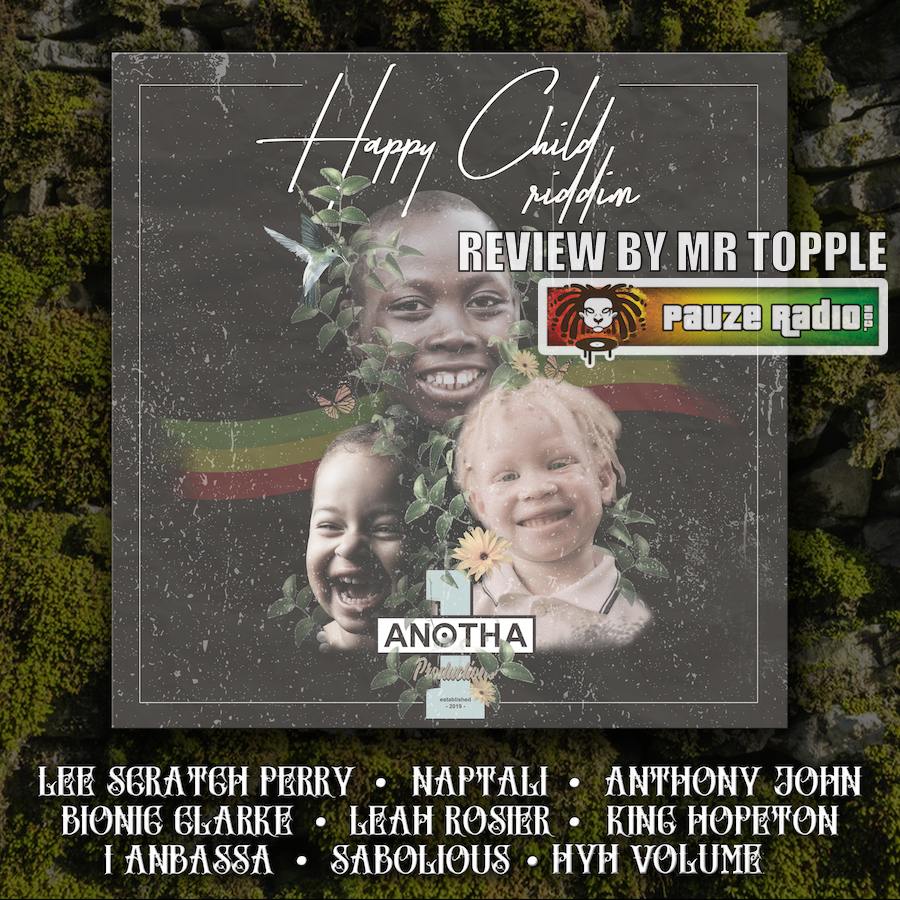 Having been around 15 years in the making, a record label has finally released a sweeping riddim – featuring some truly legendary artists. Has it been worth the wait? Absolutely.

Happy Child Riddim, released via Anotha One Productions, saw the label’s founder Milan Ivkovic compose the initial riddim way back in 2005. The first artist recorded their interpretation in 2006. Fast-forward to September 2020, and the final artist added their cut. It’s quite a journey for a riddim to have. But interestingly, the length of time has worked in its favour – and the basic composition is a highly accomplished piece of music.

It sits very much at home with the family-orientated Reggae that has had prominence this year: from Aaron Nigel Smith’s Live in LA album to Ziggy Marley’s More Family Time – accessible music for all ages has had a renaissance in 2020. Happy Child Riddim fits right into this. The mixing of the vocals by Alex ThreeLake is stellar; many of the background vocals have been provided by the talented Lymie Murray and Umberto Echo has applied his deft hand to the final master.

There’s something of the carefree and almost innocent about Ivkovic’s composition. There are some fundamental Reggae devices in play, which give the riddim its structure. Keys run a bubble rhythm, which at points have a healthy dose of reverb and decay filtered across them. Electric guitars skank with the lightest of touches; again, with some light-touch engineering. The drums are on a regular one drop, where the kick and snare focus on the two and four with the hi-hats filling the breathing space in between. Meanwhile, the bass generally avoids a traditional drop-beat rhythm, offering something more intricate which provides momentum for Happy Child Riddim. But move past these rudimentary elements, and the composition comes into its own.

A secondary electric guitar riffs with the timbre of Cali/Surf Rock – the mid and treble on the amp up, to create a whining and slightly raspy sound along with some nice bending. An electric organ at times performs a frantic embellished bubble rhythm, hitting two semiquavers then a quaver. Then, it halves the time of this – before performing some vibrato-laden riffs, too. The keys’ line often moves way past a bubble rhythm, performing a rhythmic motif which serves as a melodic countermelody. There’s a wonderful inclusion of a flute, occasionally straying in and out. Additional percussion comes in the form of blocks, guiro, tambourine and additional military-style rolls on the snare.

It’s these further features which helps cement Happy Child Riddim’s family vibe; you can almost picture a group of people, young and old, performing on the array of instruments. Then, Ivkovic has also entrenched this feel with the arrangement and performances. The keys, guitars, organ and bass are all playing noticeably staccato (short) notes – everything is very clipped and precise, giving the riddim a rhythmically choppy and urgent feel – but the vibe you get is almost inquisitive and child-like. This attention to detail is excellent – and the finished piece is a veritable piece of musical anthropomorphism – an aural representation of a literal ‘happy child’ exploring the world. It’s then enhanced further by the brief shifts from major to minor keys – representing the trepidation and nervousness a child has, experiencing new things. Enter the roster of artists to build on this.

First up, and Anthony John gives us Take A Look. His voice is rich and compelling, working across a high tenor range with a pleasing timbre and good use of vibrato. His choice of melody works well with the riddim – but it’s what he’s done lyrically which shows his talent. The positive lyrics about how children are all born the same, regardless of ethnicity, are across the major key. Then when the track changes to minor, John gives us narrative about what the system does to them. Enthralling and well thought through, overall. Listen to Take A Look here.

Give A Little Love is from Bionic Clarke. His performance is pared back compared to Johns – more poised and elongated in terms of his choice of melodic and rhythmic structure; extending the majority of the notes, and also working around a lower register. These extensions display the control Clarke has over his voice, as does some stretched out vibrato that he reserves for the end parts of notes. Lyrically, Clarke exudes positivity – extolling the power of love and the need to spread it worldwide. Listen to Give A Little Love here.

Hyh Volume delivers Jah Love. Here, he takes the riddim in another direction entirely – brining some distinctly Soul elements into the mix. His voice is rich and resonant, working across a strong upper tenor register with its centre sat high in his upper airway; almost nasal in fact. He does some wonderful vowel twisting – turning ‘ohs’ into ‘ows’ and so on. His secondary vocal line does some excellent response to the main line’s calls. And lyrically, he’s also pitched it perfectly – not only making the opening almost nursery rhyme-like in structure but also including a sing-a-long bridge, too. Perfection. Listen to Jah Love here.

I Anbassa gives us Hold It Strong in his own, imitable style. He has an instantly recognisable voice, sitting in a high, rasping tenor which here he puts to good use. There’s more focus on the rhythmic patterns than with the preceding artists – taking a basic, stanza-like structure and then embellishing it. The bridge is well-placed, serving as a vocal break with some spoken word and soft backing accompaniment. And lyrically, Anbassa has upped the ante, discussing historical context to the world’s current struggles. There are some nice Dub touches littered throughout the vocal engineering to – and Hold It Strong is a solid piece of work. Listen to Hold It Strong here.

Children Of The Ghetto from King Hopeton takes the Happy Child Riddim to a lyrically more sombre place – yet it still works against the carefree musical backdrop. He begins the track with a distinctly choral opening, before relaxing into a Reggae-Soul hybrid performance: rhythmically at home in the former, interpretatively in the latter. But it’s Hopeton’s performance that really stands out. He increases it in pitch and urgency as the track progresses, building the crescendo to marry with the lyrics. These are strong, too – discussing the way in which the system abandons the youths to a life of poverty and misery. Powerful works. Listen to Children Of The Ghetto here.

Leah Rosier was the first artist to provide a Happy Child Riddim interpretation, back in 2006. She delivers it, Little Children, with aplomb. She has a pleasing voice – sitting predominantly in her chest, even up into her higher register, she has a clean tone and a skilled ability to maintain pitch across melodically and rhythmically complex phrases. The occasional break-out in singjay works to good effect as does her use of pointed enunciation (note “run, run, run him down”). The track is lyrically emotive – and considering it was penned over a decade ago, still sounds fresh. Listen to Little Children here.

Fast-forward to September 2020, and the legendary Lee Scratch Perry recorded his version: Happy Birthday. Now well into his eighth decade on this planet (84 years, as it happens), he is still as compelling and thought-provoking as ever. The track is a brilliant interpretation of the riddim, with the vocals brining in elements of Dub, honing the style the artist is renowned for. Perry exudes positivity across the track, and technically performs some great vocal riffs across interesting rhythmic patterns. The riddim has been altered slightly, too – with some additional Dub drum instrumentation added, and the whole thing is just lovely. Listen to Happy Birthday here.

Another artist verging on the veteran status is Naptali. Here, across the riddim’s title track, he delivers a perfectly placed performance for the meaning of the composition; vocals in this instance are mixed by Umberto Echo. His voice is very well controlled and completely on target with its pitch. He displays notable breath control throughout as well, even at the top end of his register and across quite lengthy phrases. His use of rhythm is very good – building the complexity of it as the track progresses. And his sermon about our collective responsibility to the children, who are of course the future, is poignant and thoughtful. A fitting interpretation for the riddim as a whole. Listen to Happy Child here.

Sabolious provides the only instrumental interpretation of the Happy Child Riddim – and the saxophone is the perfect instrument to do this across Happy Breeze. There’s no question of the artist’s skill, here using the sax as a veritable voice – flipping between drawn-out legato phrasing and more pointed, tongued sections. His use of vibrato is akin to a human Soul singer – extending it and changing the pace across notes. The tone crescendos and decrescendos well; his use of occasional but details rhythmic runs is pointed – and overall Sabolious has given a light, airy and warm wind that flows across the riddim; befitting of the title, Happy Breeze. Listen to Happy Breeze here.

Happy Child Riddim is quite something. Musically smart, detailed and wholly befitting of its title, Ivkovic and Anotha One have produced something timeless and engaging. The roster of artists is strong, and all bringing something different to the table. Overall, the project is a fine way to end the year – and an equally fine, hope-filled and dignified beginning to 2021, too. Top-class.