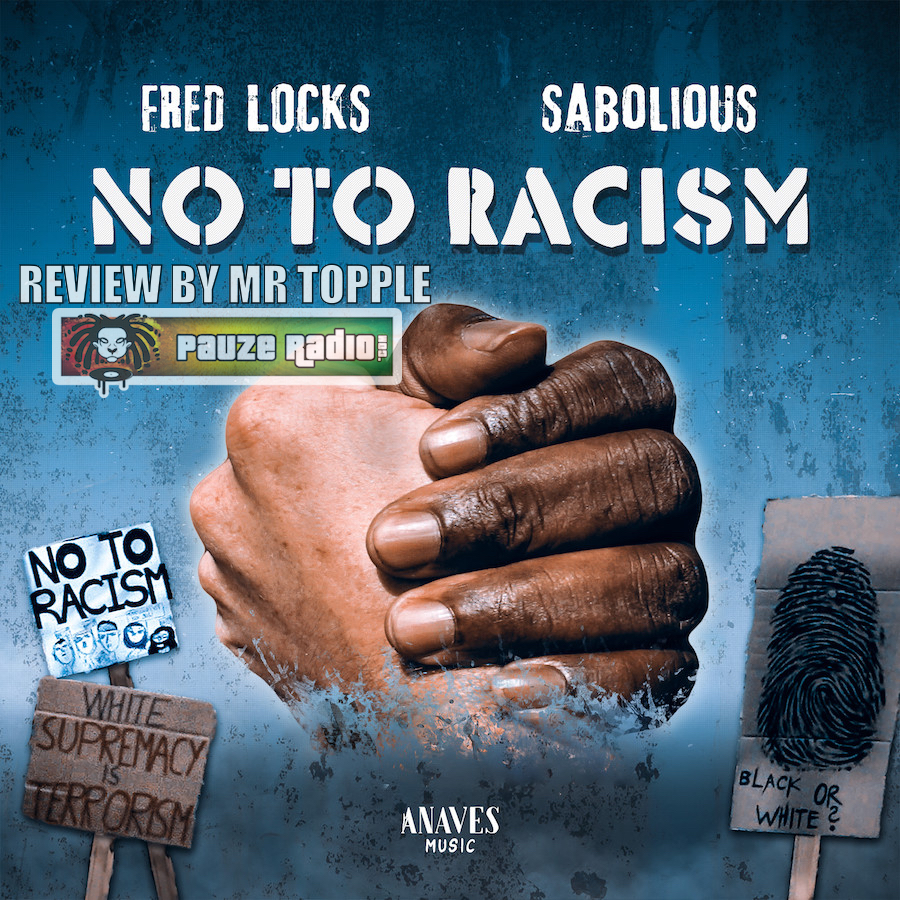 Fred Locks And Sabolious – No To Racism EP – Review

Fred Locks and Sabolious: No to Racism EP Review by Mr Topple for Pauzeradio.com.

Veteran Roots artist Fred Locks is not one to become idle in the face of political and social adversity. This is demonstrated not least by his new EP with Sabolious, as it tackles the fall-out from the murder of George Floyd head-on.

Fred Locks and Sabolious No to Racism, released via Anaves Music (Sabolious’s new record label), sees him, Locks and composer Martin Rothe hone in on a style rarely seen across more Jamaican-based Roots-led music anymore: Steppers, but with its signature four-on-the-floor arrangement taken up a notch across six versions. The overall mixing by Buriman and mastering by Martin Scheer has elevated the tracks, which are all across a basic riddim, to a very high standard. And overall, everything works beautifully.

The underlying composition is intricate and expertly arranged. The four-on-the-floor is put into an eight-beat hyperdrive by the drums. A kick repeatedly hits quavers across the bar in a frantic, staccato fashion. It takes the Steppers vibe up a notch, giving the track the feeling of being twice the BPM it actually is; more frantic than the traditional crotchet-led rhythm. Hi-hats perform a demisemiquaver-semiquaver roll which lands on the offbeats, driving the extremely busy feel further forward. At times, they’re embellished again, piling on the surging wind of the track. Snares are similar, a vibraslap brings more edginess – and the whole arrangement is a brilliant enhancement of the Steppers’ sound.

A rich, resonant bass works across a two-bar rhythm, focusing like the kick on quavers but with six semiquavers which round off each bar. It also drops the one on the second bar of each phrase, and melodically works around a diatonic riff, fitting with the post-Rocksteady style Steppers is known for. Tinny keys run an authentic bubble rhythm working around the lower treble and bass clefs, where the right hand runs a countermelody to the left’s stomping chords. Heavily elongated reverb is added at points, cementing a nod to Dub.

It’s a driving and urgent composition, which works perfectly for the different interpretations to bounce off and embellish further.

Locks’ version is a superbly conducted piece. Musically, and for a nod to the origins of the main genre, a flute plays an accompanying response-led role to the main melodic line – all very Mento and extremely well executed, working around diatonic notes. Locks himself is stunning, possessing all the technical quality of many younger performers, as he mixes elements of singjay and straight vocal across No To Racism. He exhibits a warm vibrato, expressive use of dynamics and clear intonation. Lyrically, it’s powerful stuff as well, as Locks’ proclaims: “The black man’s blood is not black; the white man’s blood is not white. The Chinese and Indian – one blood. Although the colour of our skin is not the same, red blood runs through every man’s veins”. It pertinent, dignified and expertly constructed – and shows Locks is still at the peak of his powers.

Differences are clear across much of Sabolious’s version. For example, the keys’ left-hand chords are reverbed more, heavily compressed and high-passed; at points almost giving an ‘other room’ feel to the bubble rhythm. His sax line works around the same melodic motif as Locks’ at points, but Sabolious has expanded up and to the side of this. Additional sax lines replace the backing vocals previously done by Ramon Rhoden, harmonising in unison with the main melody. And Sabolious is a highly skilled saxophonist. He uses wonderful, vocal-like waxing and waning vibrato across the longer notes, which also demonstrates his impressive breath control (circular breathing, perhaps?). His tonguing to produce semiquavers (and occasionally their demi cousins) is crisp and sharp. Overall, Sabolious has given a technically brilliant and emotively strong performance.

There are Dub versions of both Locks’ and Sabolious’s interpretations. Then, there are two other “Dub to Racisms” which again, are intricately different to the main riddim.

The first, the Electrified Version, sees the engineering completely flipped on its head. The track has become driven by the bass, which takes prominence above the now-heavily high-passed, compressed, decaying and reverbed keys. Swathing breaks feature heavily, creating a sound that makes you wonder if your speakers can handle it. The vibraslap is enhanced, now sounding forceful yet pensive. But for some counterbalance, what sounds like a compressed and higher kHz’d melodica makes fleeting appearances, running a brief melodic line. It’s sharp, piercing tone is the perfect musical anthropomorphism of the “electric” in the title – and the Electrified Version is unsettling, uncomfortable, but all in a wholly good way.

The EP concludes with the Intergalactic Version. Again, the engineering has been reworked, with additional EQing and stretched-out reverb on the keys line which morphs their bubble rhythm into something otherworldly. The melodica is there, but again it’s been messed with. And the elongated decay, reverb and EQ adjustments on the snare make it sound pitched and scatter it off into the distance, long after it’s been struck. Additional samples and synths compliment the astronomy-based theme well, giving the Intergalactic Version a real sense of outer space.

No to Racism EP is pure class from Sabolious and Anaves Music. It’s an inherently clever piece of composition, with the taking of the Steppers’ sound and bringing it bang-up-to-date. Locks is superb, as expected, as is Sabolious’s sax – and the entire package is compelling, elegant yet furious, perfectly matching its thematic content. Glorious.

Fred Locks and Sabolious No To Racism review by Mr Topple (8th August 2020). 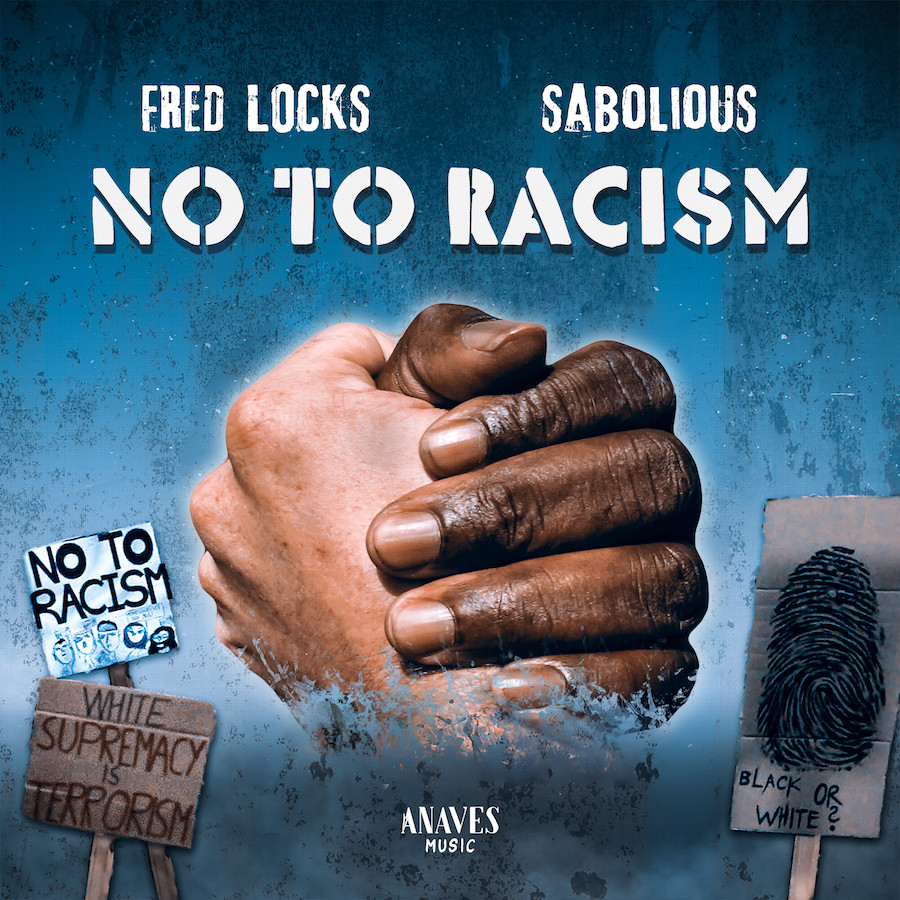