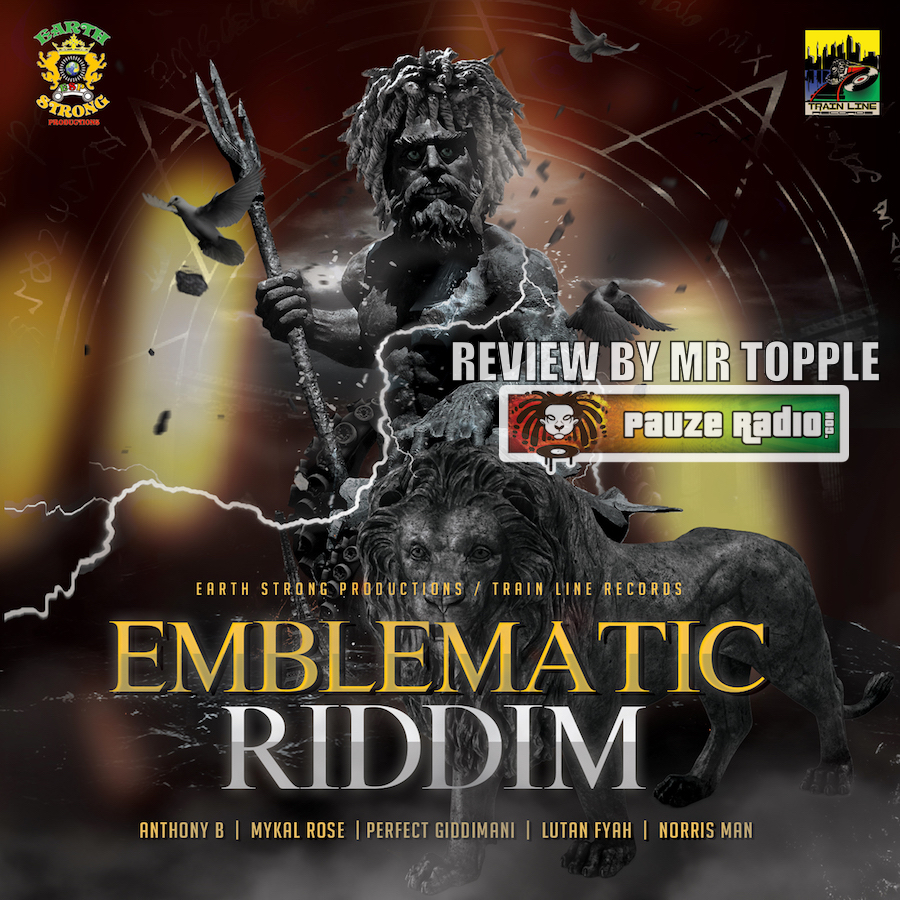 A stellar line-up of acts has delivered a brand new riddim, which in itself is one of the stronger works so far of 2021. And it’s thoroughly ‘emblematic’ of the producers’ and artists’ talents.

Emblematic Riddim, released via Earth Strong Productions/Train Line Records, is a gorgeously constructed affair that has attention to rich detail at its heart. Both outfits have skill when it comes to compositions. Because the riddim is pleasing and well-arranged. The background vocals from Twiggi and Krysie Webb across the EP are strong and sympathetic to the riddim. And Earth Strong and Train Line have then got some renowned artists to contribute to the overall EP.

It opens with a lilting acoustic guitar line running a delicate riff, accompanied by a bell bottle synth – which sets an ethereal tone. But the riddim soon settles into a fluid, Roots-based style which utilises some musical devices of the genre well – along with some quirks.

The BPM is actually fairly pacey for a Roots track, which is carried along by the rhythm section. Keys run a choppy bubble rhythm, which is then complemented by an electric organ, heavily vibrato’d, striking chords on the two and four. Meanwhile, an electric guitar skanks just out of earshot which occasionally breaks out into riffs – while its acoustic cousin from the intro continues with its refrain. But the forward motion of the track heavily relies on the bass. It avoids usual Roots traps (a one drop of drop-beat rhythm). Instead, it runs a rapid riff which utilises a four semiquaver/two quaver formation (really quite pacey for a Roots track); melodically working around its own melody. There’s a gloriously wah-wah second electric guitar, which raspingly runs a countermelody to the bass at points.

Then, the drums also don’t confirm strictly to Roots either. Across Emblematic Riddim, they avoid a one drop entirely. The kick dominates, striking beats one and three, while the snare focuses on the two and four – with hi-hats filling the breathing space in between. There are some attractive rolls at the end of each four-bar phrase, too. This non-one drop pattern gives a harder edge to the riddim overall and makes for a persistent rhythmic drive, working well with the pacey bassline. There are some lovely additional touches too – the inclusion of a G-Funk whistle being particularly pleasing.

Overall, Emblematic Riddim is a strong composition – sitting nicely between Roots and something more soulful. The attractive chord progressions, being mostly minor but with brief moves to major, compound this vibe. The overall mastering is also note-worthy. For what is a fairly complex musical arrangement, the finish is very slick: individual instrumental lines can still be picked out, even though the rhythm section stands to the fore to drive the track – and the overall feeling is rich, even across the higher pitched instruments. What also stands out is that the riddim has been well-constructed with vocalists in mind. Earth Strong and Train Line have made it such that the arrangement has room to be adjusted for each artist if needed – which at times it has been.

Anthony B gives us Jah Army – being his usual compelling and forthright self. Here, he gives us a veritable sermon about how “we are living in the time of Revelations” with a vocal performance to match. Anthony B keeps his dynamic open and loud throughout. On the verses he sits in that grey area between straight vocal and singjay: working around a basic rhythmic stanza which he embellishes, but also delivering a fairly detailed melodic arrangement, too. He has also created a memorable chorus and lyrically, Anthony B is on fine form. The spiritual ‘call to arms’ in these dark times, when we must rise up against Babylon’s toxic system that’s destroying us and the planet, is rousing.

Then, Circumstances from Lutan Fyah is another fine interpretation. Musically, Earth Strong and Train Line have mixed up the riddim – bringing in some pointed musical breaks, focusing on a one drop feeling by cutting much of the arrangement on the first beat of the bar. These fit brilliantly with Fyah’s vocal, who is on-point and engaging as always. He delivers a rhythmically complex performance on the verses, using several different stanzas which range from a dotted quaver-based one to rapid demisemiquaver work (while maintaining perfect enunciation). This variation, combined with a pleasing chorus and Fyah’s signature warm, versatile vocal and singjay, really elevate the lyrics about the state of the world and society and how it impacts on those of us who are conscious versus proponents of Babylon. Stirring work.

Mykal Rose gives his interpretation of the Emblematic Riddim with Rock My Soul. He has one of the more recognisable voices in Roots – sitting somewhere between Reggae and Soul, with interpretation and timbre from him to match. Here, his voice is crystalline in quality, working a straight vocal around his mid-to-upper register. He makes good use of dynamic light and shade as well as the clipping/extension of notes and some nice improv. Lyrically, Rose has provided an interesting narrative about the importance of the love of both each other and Jah as we navigate our paths in life – and how they can carry us through, whatever happens to us.

I’m A Lover from Norris Man is an attractive, thematically Lover’s Rock track. His voice is very pleasing – gliding around his tenor register with an embouchure that flips between horizontal and vertical like that of a Soul singer. There’s urgency in his performance, as he performs glissandos and whines across the notes and includes rapid crescendo and decrescendo. Man’s straight vocal works well with the riddim, as does the improvised feeling of much of it. He’s an impressive performer and I’m A Lover is a lush and slickly executed interpretation.

The EP closes with Perfect Giddimani giving us Ungrateful. Again – the arrangement has been mixed with, once more bringing in breaks (which here feel like brief vinyl pull-ups) to match with Giddimani’s vocal performance. He is a consummate performer, and here is no exception. He utilises the varying vocal styles he is known for – mixing up gruff, growling singjay with more a soulful vocal, and changing the timbre during both. His rhythmic arrangement is well-executed, with some impressive switching up of a basic stanza on the verses. Lyrically, he’s delivered a potent narrative about how those in life that seek only to further themselves (especially Babylon’s proponents) are toxic and should be avoided. It’s a thoughtful finale to the project and shows Giddimani at his best.

Emblematic Riddim is a very solid piece of work from Earth Strong and Train Line. It’s highly attractive and infinitely listenable, not least because of the clever fusing of traditional Roots with something more soulful. The artists’ performances are all near-faultless – and overall, the EP would make a quality addition to anyone’s 2021 collection.