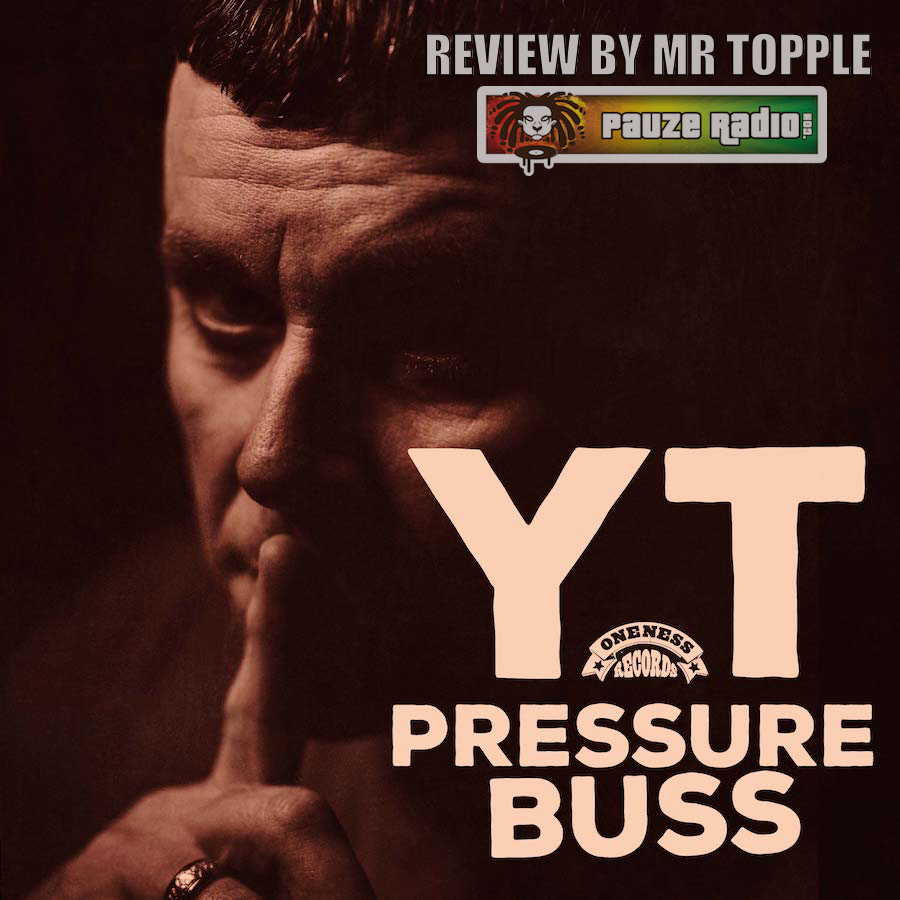 One of the UK’s most pioneering Reggae artists, YT, is back with a bang in 2021: a new EP, Moment for Change, forthcoming via one of the biggest labels in the business. And, if the first track is anything to go by, it’s going to be a scintillating affair.

YT Pressure Buss, released via Oneness Records, plays to both YT’s and the label’s strengths extremely well. Roots in its formation, it is an atmospheric and brooding affair littered with attention to detail and a quality of production and engineering YT and Oneness are known for. But there are also some delicious intricacies which set it above its peers.

You cannot avoid the Roots musical devices that are in play. Top among these is the deep, heavy bassline. It works off a variable drop-beat rhythm, formed around a two-bar rhythmic riff. On bar one, it drops the three, then on bar two both it and the one – creating a stuttering wind that is central to the track’s momentum. Melodically it works around diatonic runs, in keeping with a post-Rocksteady style. And its timbre is glorious: resonant, booming and slightly picked in technique. An electric guitar line, heavily rasping and almost wah-wah’d, mimics the bass’s melodic and rhythmic motif, but an octave higher. It occasionally employs the briefest of skanks, too – helping the other instrument’s roles.

Keys run an intermittent bubble rhythm across Pressure Buss, which is unfussy and persistent. There are elements of Dub brought in, as before taking a break they’re reverbed and decayed off into the distance. The keys are complimented by an electric organ, which takes their place at times – while at others it runs vibrato’d chords. Then, it occasionally also performs a choppy riff. This multi-layering of keyboard instruments works very well, bringing real interest to what are traditionally in Roots rhythmically-focused instruments.

Meanwhile, the drums are a curious feature. They don’t strictly sit in Roots, as the absence of a one drop is noticeable. Instead, they feel more at home in Rockers: the kick drives the downbeats (instead of the two and four); hi-hats focus on the offbeats – veering between a closed and open technique and working off an ‘and-a’ rhythm. So, it’s left to the snare to hit the upbeats. This feeling is changed by some pointed breaks but moreover the chorus – where for the first half the bubble rhythm keys drop out, making Pressure Buss feel all a bit grimy and Hip Hop. Then, there’s also some fleeting moments which put you in mind of Steppers – notably the sudden demisemiquaver rolls on the snare; then repeated later by the hi-hats. But it’s the additional instrumentation which is also exceptionally pleasing.

There’s been a growing movement towards a real old skool, almost Synthwave feel in a lot of Roots music recently – and here is no exception. For example, the use of gritty, high-passed synth horns is the perfect example. They run responses to YT’s calls in a manner often seen in the genre. But the fact they are synths gives Pressure Buss a distinctly dystopian feel – fully in keeping with the thematic content. It’s a clever move and perfectly fitting with the overall feel of the track – and all things combined the composition and arrangement are slick, smart and affecting. Enter YT, to finish things off perfectly.

He’s furious throughout, taking no prisoners as he delivers his sermon. Sitting somewhere between a straight vocal and singjay, he works around a variety of dotted rhythmic patterns – embellishing these with increased pace as the track progresses. There’s a superb section on a bridge where he really ups the syllable count, hitting around seven of them a second. Melodically, his performance is interesting too – giving an infectious chorus which sticks in your brain. YT’s verses are also well constructed, working up and down his vocal range with ease. He doesn’t drop a note; his enunciation is clear and he makes good use of note-clipping to accentuate certain points. Lyrically, it’s pertinent and potent stuff – as he laments the state of the world and the increasing political and social tension that we’re all feeling. Will this pressure, put upon us by the system, finally ‘buss’? Who knows, but YT encapsulates it perfectly across the track.

Pressure Buss is a strong introduction to YT and Oneness’s forthcoming EP. Stirring, unnerving and thoroughly unflinching, it’s a musical representation of the lyrical content. Oneness are at the top of their game, matched by YT – and the whole thing is 21st century, progressive yet haunting Roots perfection. Storming.