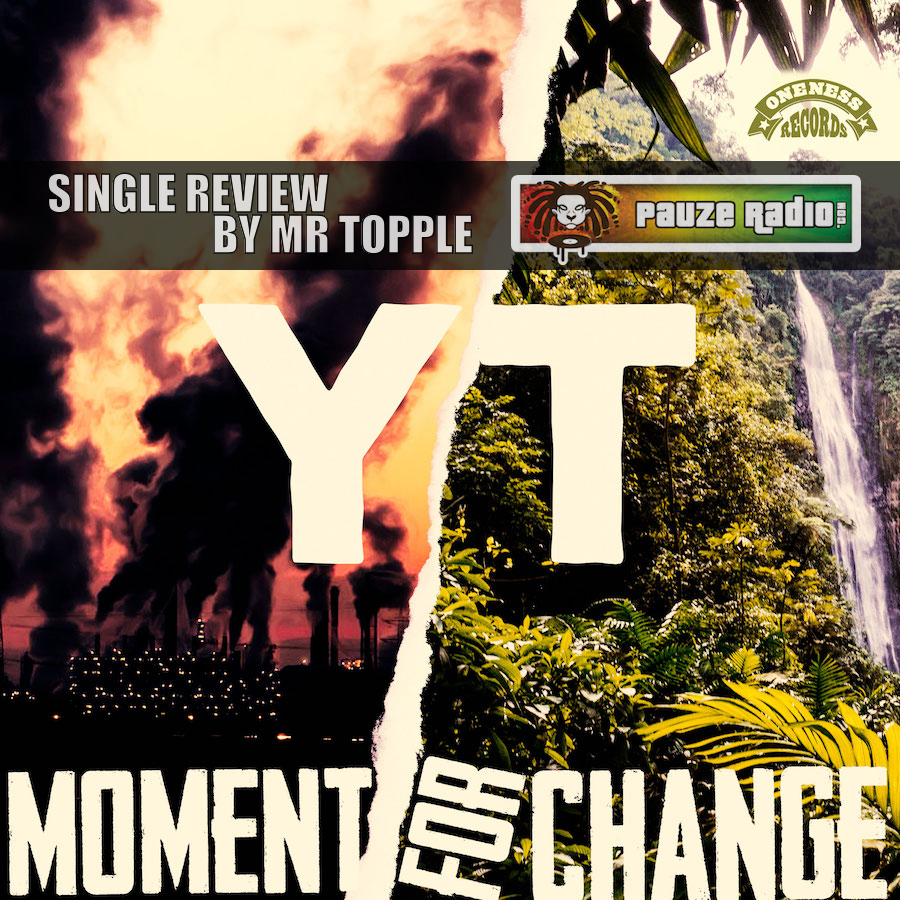 UK-based artist YT is back with the second single from his forthcoming EP – in this case, the title track. And once again, all the signs are indicating that this new project will be fyah.

YT Moment For Change, released via Oneness Records, sees YT again team up with master producers Oneness (co-responsible for the whole EP). This means the production and engineering are top-class. And the composition and arrangement themselves are also of high quality: boding well for the full EP, given this is the title track.

The track centres around Roots as its main style, with elements of Dub and Soul also brought in – including its grandiose, Funky Soul opening and closing. The rhythm section is key to the track’s overall vibe. Keys run a bubble rhythm; staccato and punchy it has flourishes of riffing at the end of certain phrases. But the keys drop off at the beginning of the first verse, and also during the second – creating some nice breaks. Moreover, occasional reverb and decay has been added, sending their sound off into the distance and proudly nodding at Dub. Then, enter the bass to help drive Moment For Change forward.

It’s on a heavily syncopated one drop rhythm, which always skips the first beat, and on bar one of its phrase also the three. But in between these drops the rhythm enters into semiquavers at points, creating a brooding forward motion, fitting with Moment For Change’s subject matter. But the bass’s timbre isn’t too picked – it feels smooth even across the clipped semiquaver notes, allowing its line to wash across the track. Meanwhile, drums seem to avoid a standard one drop – with the kick hitting every beat. Hi-hats run a double time rhythm, while a snare hits the two and four. The imposing kick is a clever move – because while the bass provides the one drop breath, the kick maintains a sense of urgent pace.

Moment For Change has some delicious additional instrumentation too. An electric organ follows almost a guitar skank with additional riffing – just out of earshot, but noticeable enough to hear the vibrato and its whining sound. Then, an electric guitar does an actual skank which breaks out at points into a countermelody with some nice bending. Well-placed samples and synths drive the Dub vibes, enhancing those breaks led by the falling off and engineering of the keys. And the use of additional percussion, including blocks, works well.

The track’s backing vocals are pure Soul/Doo Wop. They alternate between straight harmonic accompaniment to YT’s main line, responses to his main melodic call and straight harmonised work across vowel sounds. They add real depth to the track and help elevate it to something almost anthemic. This is also helped in no small part by the interesting chord progressions across the arrangement, which avoid standard Roots’ ones. And YT’s performance cements this compelling and engaging feel.

He is very strong across Moment For Change. YT maintains a constant state of urgent anticipation – mirroring the vibe of the composition. His style is noticeably clipped across much of his performance, using longer notes sparingly. He employs a great variety of dotted notation, at points using semiquaver-led ones to hammer home certain lyrics – also putting in straight semiquavers to good effect. His intonation is pitch-perfect, delivering a memorable chorus and good melodic diversity across the singjay-led verses. Moreover, YT’s lyrics are pertinent – giving us all a veritable and rousing cry to take collective action against the system and its proponents. The time is now, as it were, for change – and YT compels us to “seize the moment”.

Moment For Change is strong work from Oneness and YT. Musically very pleasing and detailed, YT himself is on-point and lyrically powerful – and the whole thing makes the arrival of the full EP even more exciting.