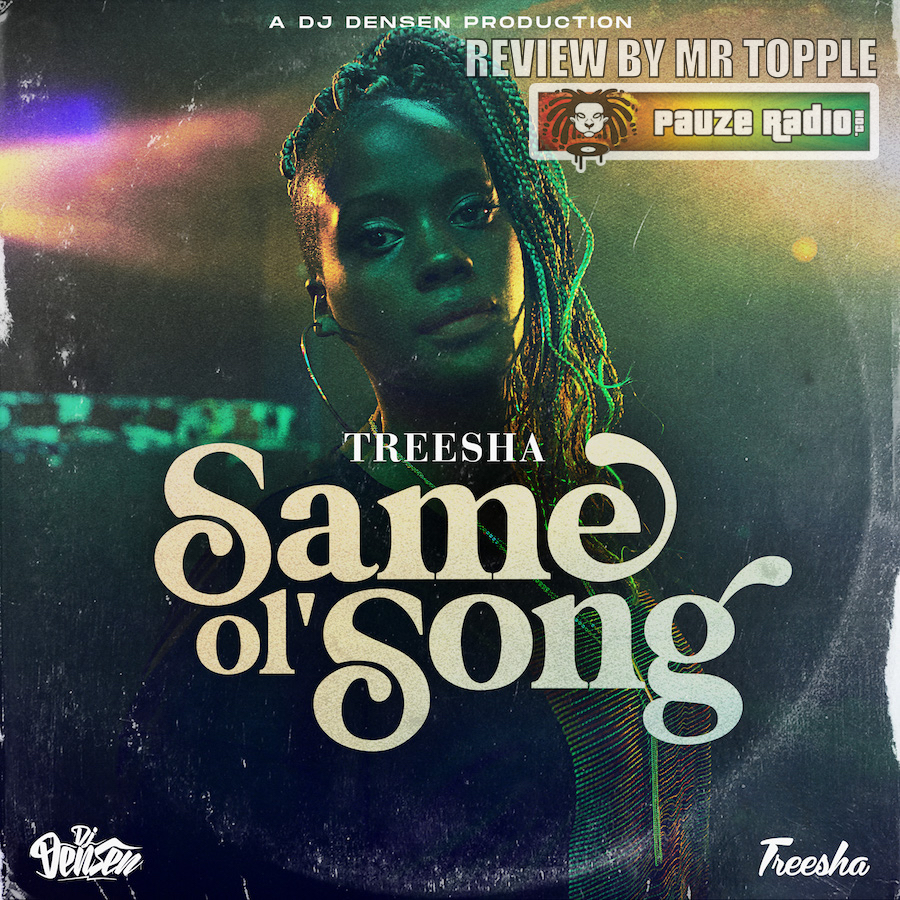 If you want a guarantee of always on-point vocals coupled with eloquent lyrics and finished off with some gorgeous and intricate music, then Treesha is always a safe bet; even more so when she teams up with one of Europe’s hottest producers.

It opens with an almost surreal introduction: Densen has swept some heavy low-passing/compression across the instrumental lines, before gradually reducing this until the track starts proper. It serves as a brooding beginning to what then becomes a hybrid of Reggae, RnB and some modern Pop devices amalgamated together.

Same ol’ Song’s Reggae sensibilities are clear, with the bass being the driving force of this. It generally works off a drop-beat rhythm, skipping the one which serves to create both breathing space for Treesha’s vocal but also to give the track its wind. Melodically, it has that post-Rocksteady style of using its own melody based around the diatonic scale. Moreover, its timbre is rich and the style slightly picked – giving the track momentum but not in an overbearing way.

During the verses, this is then enhanced by an electric guitar running a choppy skank. Couple this with an electric organ and keys, which Densen has employed to push a bubble rhythm, and Same ol’ Song feels like a Reggae cut: cleverly, the skank and bubble rhythm build individually, to a point at which they both run together, creating a sense of peaking within the music. There’s also a glorious bridge, which is pared right back to almost feel like a nod to Dub. But of course, the genius of Densen means nothing is quite that straight forward.

Same ol’ Song has some distinctly RnB vibes. Mainly on the chorus, the electric guitars broaden out into something quite funky, using heavily dotted notation across riffs. Swaggering horns compliment this, doing tongued, stabbing responses to Treesha’s calls. The electric organ’s role is enhanced further, at points riffing out of earshot while at others running heavily vibrato’d chords – which come into their own on the bridge; almost serving as an accompanying, frustrated scream to Treesha’s.

Same ol’ Song’s drum line is somewhat ambiguous. While the snare strikes the two and four, much like a one drop, hi-hats are more centred around a double time with occasional dotted notation riff, in keeping with the RnB vibes. The kick mashes this up further, focusing on the first beat of the bar; filling in the one drop left by the bass. There are some lovely synths, which wouldn’t feel out of place in modern Pop (much like the infectious main melody). And the backing vocals finish the arrangement off well, working across both straight harmonisation and call and response duties. Overall, Same ol’ Song is a masterfully slick piece of composition and production from Densen. So, enter Treesha to top proceedings off perfectly.

What she always does so well is blur those lines between straight RnB/Soul vocal and Reggae-led singjay expertly. Here, she uses her voice to full effect – effortlessly gliding up and down her fairly extensive register. The lower, more alto end of her treble clef is rich and rounded, delicate yet poised – on the chorus particularly, she utilises expansion of the note lengths to contrast the musical complexity. But on the bridges, she branches out – up the treble clef into a well-controlled soprano range (both in a chest and head voice), doing some on-point improv and complex riffing as well. Her singjay is pure fyah – using excellent melodic structure coupled with a basic rhythmic stanza which she then embellishes as the verses progress. Lyrically, Treesha isn’t happy – scalding the partner in her life who makes excuse, after excuse, after excuse, for their lax behaviour. As she spits: “Say me a Queen but you don’t give me no crown. You say yuh check in but I never see you ‘round”. Delicious.

Same ol’ Song is a very strong release from Treesha and Densen. Musically smart and detailed, it’s constructed in such a way as to have the vibe of Reggae but with the accessibility of RnB/Pop. Treesha is one of the most reliable and engaging artists around, and the whole package is pure, Reggae-Fusion perfection. An exquisite way to finish off 2020.