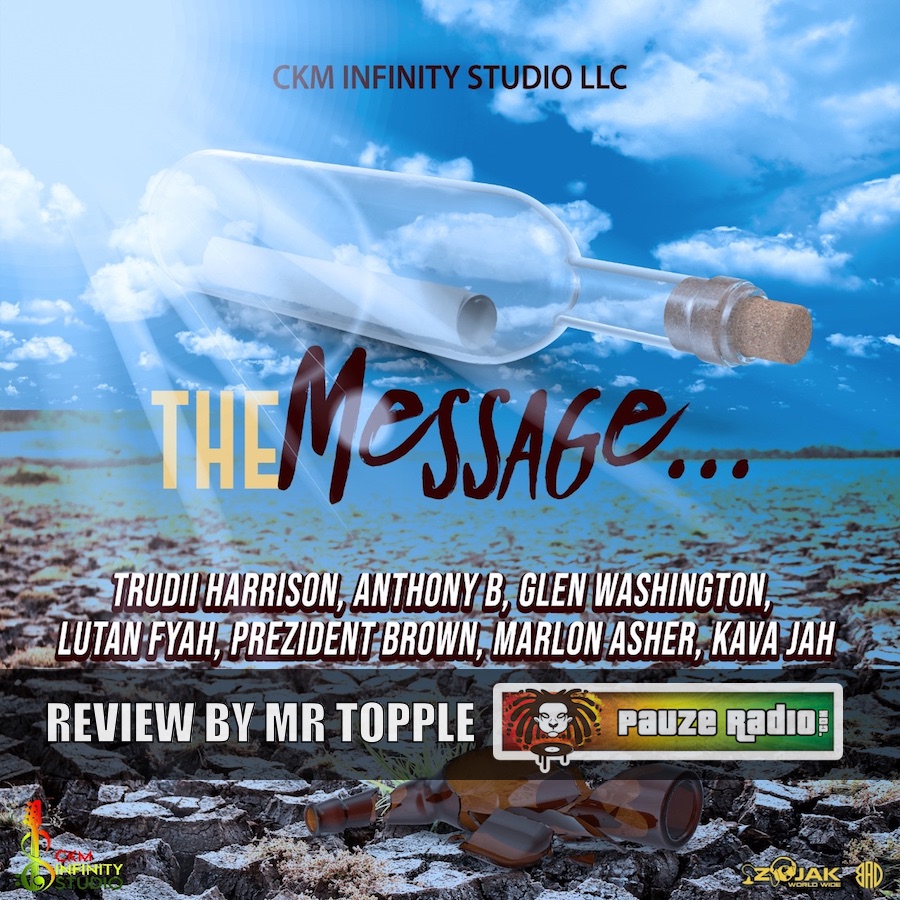 Cliff Manswell’s CKM Infinity Studio has taken a power move: getting a stellar and somewhat diverse group of artists together to release a riddim. It could be viewed as a gamble. But don’t worry, because it’s thoroughly paid-off.

The Message EP, released via CKM Infinity Studio, sees Manswell conduct various artists’ interpretations across a basic riddim. But there’s nothing ‘basic’ in terms of the composition’s musicality – as Manswell and the team have delivered a thing of clever beauty.

The riddim itself is undeniably Roots-driven, utilising various devices to deliver a recognisable sound – but one that is far from rudimentary or traditional. Heavily staccato keys from Manswell perform a relentless bubble rhythm, which tonally sits in a predominantly lower area of register than on some Roots tracks – which immediately creates depth. His bass, syncopated across drop-beat rhythms, works around diatonic riffs. The dropping of beats is interesting – most notably on the chorus, where it works off two-bar phrases, dropping just the one on the first, then the one and three on the second. This pattern helps create a subtle wind, complimenting the keys.

Jubba White’s Drums perform a classic one drop to enhance the sound further – with the kick hitting the two and four, hi-hats performed dotted rhythms around open and closed techniques and the snare alternating between rim clicks and open skin hits. The occasional cymbal roll compliments these, but the overall arrangement is relentless and helps to maintain momentum across the fairly relaxed BPM.

There’s a deft use of electric guitars from Dwight Pinkney. Their inclusion is quite targeted, avoiding a straightforward skank and instead offering responses to the main melodies call. Bending is frequent, and their sound is slightly rasping and bluesy, with the bass on the amp wound down. The fleeting inclusion of what sounds like a synth atenteben (or similar woodwind instrument) at points (with a countermelody) is a clever nod to the Motherland. Meanwhile, additional synth horns (or possibly strings, or both – high-passed and tinny) join the chorus, hitting the one with sharp chords, before hitting the four and on the second bar of the sequence, the three too. Added elongated reverb and samples bring some Dub vibes into the mix – and the whole package is expertly crafted by Manswell, creating an unnerving sound that is swamped with depth and punch. Then, enter the artists – who each do a sterling job across their interpretations.

Trudii Harrison opens with Black Voice. She’s a fascinating artist who transcends the boundaries between Roots, Soul and Jazz: probably best described as Neo Soul. Her voice is ostensibly an alto – hovering in that rich, resonant area around the middle and lower treble clef. While her timbre is full and rounded, she doesn’t allow herself to be stuck to that sound – offering up a tighter, more closed tone as she moves up her register into soprano territory. She also flips between her chest and head voice well, using these to punctuate the lyrics. But it’s Harrison’s interpretation which is perhaps her strongest skill. Across the track, she intuitively moves between clipped staccato notes to marry with Manswell’s music, and then more drawn-out, longer breathed phrases. The rise and falls in her dynamics are wonderful and the deviation from standard vowel sounds a lovely touch. A 2020 Erykah Badu? Quite possibly. And it goes without saying it’s lyrically powerful work, too – as Harrison muses and rages on the systemic, endemic racism that still exists across the world.

Next, and Anthony B delivers Time Red. His recent album King In My Castle was a veritable melting pot of styles, genres and themes. But here, he goes back to his roots (musically, too) with an inspired and compelling interpretation. Anthony B is forthright and furious throughout. He works across some nicely intricate rhythms on the verses, before providing a compelling chorus that sticks in the brain. Like Harrison, he does some neat vowel deviations – but his overall performance is more fluid in terms of note length and delivery. There are also sumptuous backing vocals; heavily harmonised, shrill and urgent. And lyrically, Anthony B has delivered something powerful as he muses on the metaphorical ‘red alert’ our species and planet is on – and how Rastafari is the answer. As he sings: “Every day, every night all you hear is murdah now… Everywhere upon the news all you hear is murdah now… People round the world are fed up of murdah”. But Anthony B manages to embed a positive message in the chaos, too – noting “It’s time to stand up as a Buffalo Soldier… Equal justice and rights take over…” Classy and effective from the ‘castle King’.

They Can’t Stop Me sees Glen Washington bring a Song of Praise to The Message. It’s a vocal-heavy affair, with the approach being that of more Gospel/Soul. His voice is infinitely impressive – sitting in a high tenor range which has a gravely and endearing quality throughout. His vibrato is elongated and emotive, hitting the start of the longer notes and not letting go. Washington also has a good timbre in the lower-end of his register, too, which resonates and contrasts well with the complex backing vocals. Here, for the majority of the time they operate with Soul sensibilities, providing multi-layered harmonies in tandem with Washington’s solo. But towards the end they revert to a call and response structure. And lyrically, Washington’s self-affirming words about faith, perseverance and trust in Jah in the face of adversity is inspiring. Excellently done.

The incomparable Lutan Fyah seems like he never stops making music; potentially one of the busiest artists of 2020 when all things are considered. Here, he gives his take on The Message EP with Mr. Two Face. As always, the ever-reliable Fyah gives a sensitive and fragile performance. His vocal is smooth and fluid, not dropping a syllable and gliding between the notes even across the near-seven syllables a second rapid singjay sections. But what Fyah does so well here is the light and shade. From longer notation on the bridge to the frantic singjay; the gentle work in the lower register of his voice to the impassioned cries in a higher area and then up into a falsetto – Mr. Two Face is well-balanced and compelling. And lyrically he shows his vulnerable side once me, as he bemoans with a sad resignation those who smile in your face but stab you in the back at the same time, all in the pursuit of Babylon’s riches. Glorious.

Son Of A Gun from Prezident Brown moves The Message forward again. It strays into more traditional Roots-meets-Soul territory. Brown’s rhythmic focus is heavily across dotted notation, which gives Son Of A Gun that old skool wind; highly appropriate for the Roots-led arrangement. His performance is gentle yet pensive and he has a clever knack of putting dynamic punctuation on the notes at the end of syllables, which again serves to increase that wind. Once more, the backing vocals are extremely well arranged – drawing on elements of Doo-Wop (vowel-sound notes), straight harmonised accompaniment and call and response arrangements. They’re sparingly used, too – which hammers home Brown’s pertinent and potent lyrics.

Marlon Asher’s contribution is Use Me. He has a pleasing voice: crisp, crystalline in clarity and immediately engaging. His vocal is again different to what’s come before it. It’s almost Jazz in its laid-back quality, as he stretches notes out; uses triplet rhythmic arrangements at points and whines glissandos in the spaces between, and at the start of, notation. His ‘shoop-dooby-doo’s’ are delicious, too. The melody is once again a clever piece of construction – infinitely memorable with its jumping up and down the scale. Backing vocals are sparse, which works well in this instance. Use Me is another Song of Praise, as well – as Asher commits and gives himself over to Jah. And as a sum of its parts, the track is a stirring and funky piece of work.

The Message EP concludes with Juvenile from Kava Jah. Ostensibly Roots, Jah’s performance is relentless throughout. He has a decent vocal range, dropping down into an upper baritone, rising up into a mid-high tenor with ease – and skips quickly between the two, well. Of note is his particularly effective use of both dynamics and vibrato across the longer notes: the former he uses in waves, from quiet to loud on the same syllable; the latter he brings in at a mid-point during the note. Both provide interesting light and shade. He makes good use of varying notation length, too – at points clipping them to punctuate certain words and syllables. And Juvenile’s message is strong – as Jah provides a desperate plea to young people, asking them to open their eyes. Instead of turning on each other, he muses, they need to be looking to Babylon as the enemy. Strong, timely and a fitting conclusion to the riddim.

The Message EP is a very strong effort from CKM Infinity Studio and Manswell. The riddim itself is solid and smartly constructed, with quality mixing and mastering from Daniel Singer and Errol Brown. But Manswell has also been ingenious with picking the artists, all of whom bring something different to the table. But when combined, The Message serves as a pleasing entry in this label’s journey. Good work.