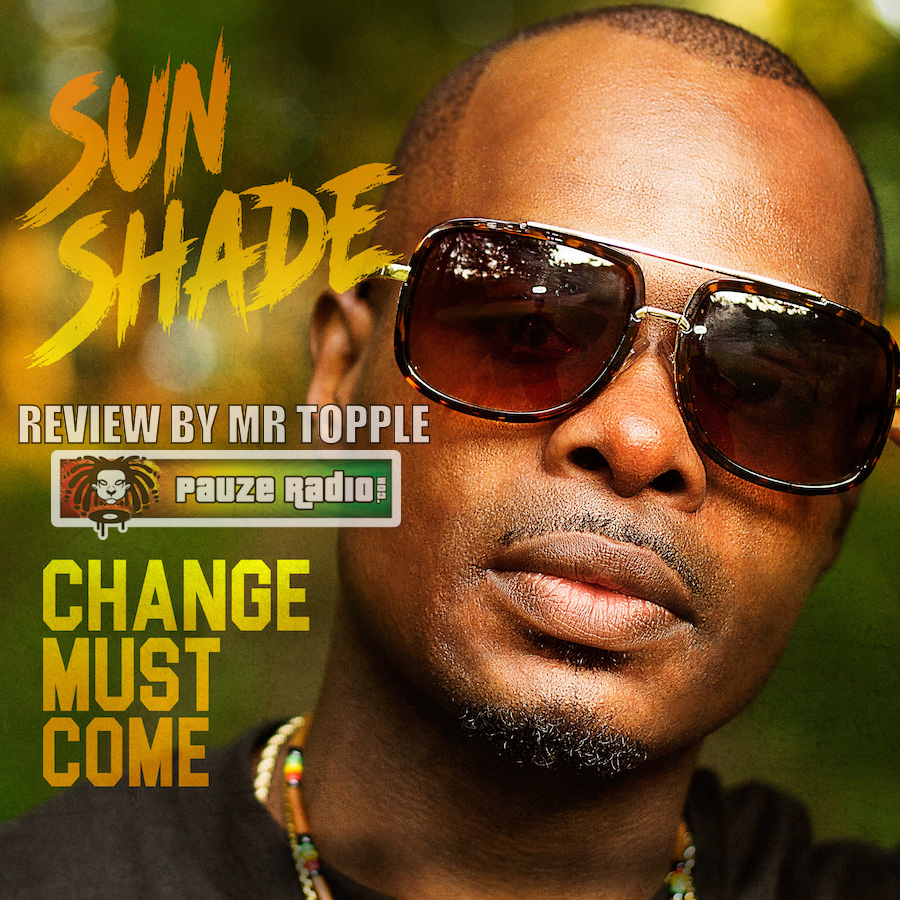 Released several months ago, a track from Sun Shade has lost none of its power – and is worth revisiting, given how little has changed recently.

Sun Shade Change Must Come, released via Jeanne Music, sees Shade team up with producer Paul “Computer Paul” Henton. The track uses his and Bootcamp Records’ 2011 Sha La Laa Riddim (a reimagining of the classic Coxsone Dodd’s You Should Have Known Riddim), while Shade’s melody is an interpretation of Dennis Brown’s across the cut Caress Me Girl (over the You Should Have Known Riddim). Quite the musical history – as DJ Gav Pauze commented, “true foundation!” And it’s all been cleverly used. Because the end result is musically smart and engaging – moving up and to the side of the previous versions that came before it.

What Paul has done so well is to take the originals and embellish them. The bass line still follows the original, syncopated rhythm that melodically works around the root triad of each chord. But here, it’s fairly picked in its timbre, running punchy, almost staccato notes. This drives the track forward and instantly gives a decent wind. An electric guitar also mimics the bass at points, but it’s subtle – creating additional depth to the track.

Then, Paul has used the countermelody that on You Should Have Known Riddim was from the keys, and on Sha La Laa was the horns. Here, the latter perform it. But instead of Sha La Laa’s multi-layered harmonies, on Change Must Come the horns runs the same melody but octaves apart. This approach is more in-keeping with traditional Ska arrangements, and works to create a starkness that juxtaposes against the melodically major key – yet fits with the cautious lyrical content. There’s more intricacy with the arrangement, too – which fills Change Must Come out well.

Drums maintain the one drop seen across previous versions. But they’re slightly less abrasive than the previous interpretations – with the snare and kick on the two and four being that bit more elongated in terms of length, smoothing things out and creating a constant fluidity. The addition of a staccato tambourine is a nice touch, bring some lighter kHz to proceedings.

Overall, Paul has done an exceptional job of reimagining two riddims across Change Must Come. Perhaps what stands out the most is the quality of the final product. The engineering and mastering have been done extremely well. Gone is the raw, edgy feel of Sha La Laa – replaced with a focus on the mid kHz and more detail in varying the dB across the instrumental lines. This creates a richness of sound which not only makes the track bang up-to-date but also serves as an excellent backdrop for Shade’s vocal.

He’s a very talented performer. Vocally astute, his voice sits comfortably in a mid-to-high tenor range. Shade strikes a nice balance between quality of timbre and natural grittiness, meaning his voice sounds technically good but still authentic. He’s done a very good job of taking Brown’s original melody and embellishing it with additional runs, riffs and dynamic light and shade. He also switches between a tenor and falsetto at points, which is smoothly done. Shade also demonstrates good breath control throughout – and his performance is delicate yet impassioned. Lyrically, it’s stirring stuff, too – as he laments how, despite the obstacles the system puts in our way, we must maintain the faith that ‘change must come’. It’s particularly pertinent now, given that many of us face constant trials and tribulations, compounded by coronavirus.

Sun Shade Change Must Come is an effective and sympathetically constructed track. Avoiding being unnecessarily fussy, it’s authentic, stripped back Roots which allows Shade to not only showcase his voice, but also the powerful and emotive lyrical content. Very nicely done – and a clever piece of production (and a musical history lesson) from Paul, too.