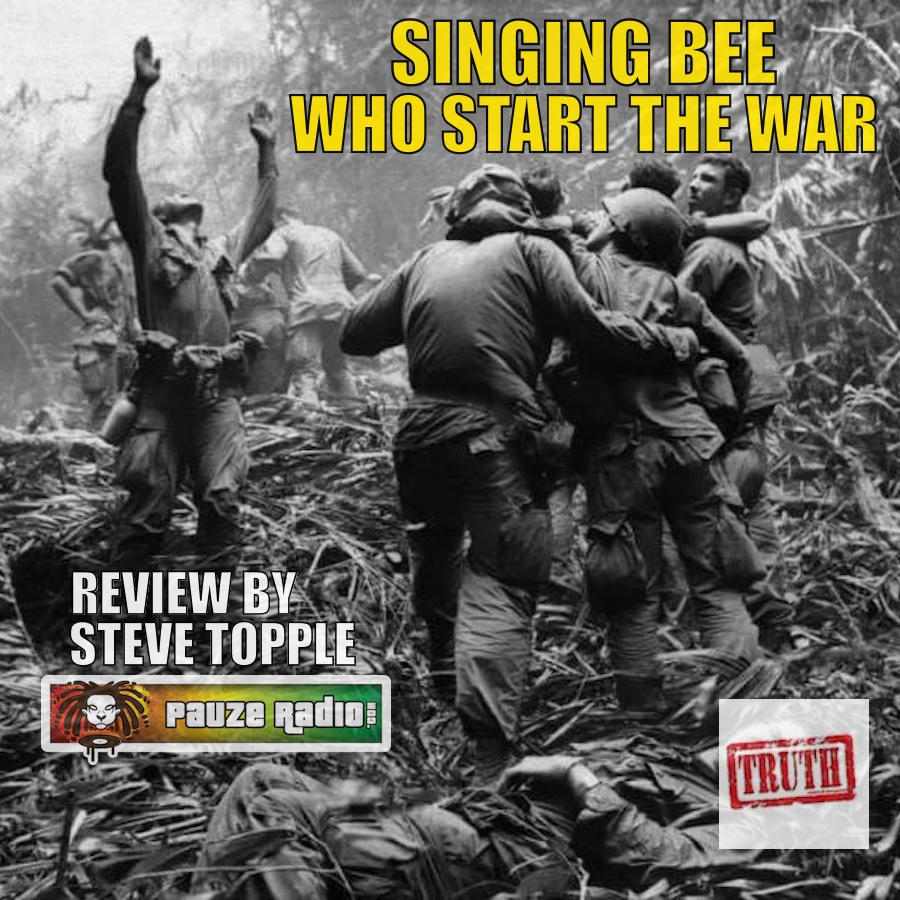 It’s always a pleasure to see the UK being represented. And the latest release from Singing Bee does a sterling job of this.

Who Start The War, released by Essex-based UK Homegrown, is a heavy, heavy piece of Dub. Wholly unsettling, it hits you from the off and doesn’t let up. The production by the team at Truth is excellent, as is the mixture of live instrumentation and synths. But it’s the infinitely complex arrangement and Bee’s vocal which truly impress.

The track opens with some striking synths, not unreminiscent of something from a gritty space opera. A heavily reverbed and filtered drum adds to the sense of impending doom. There’s a brief moment where Bee drops a spoken sentence and the drums kick in on a triple time riff – and the track feels like it could descend into Jungle. But this wanes as the Dub and Roots devices kick in, and Who Start The War begins proper.

It’s stripped back but cleverly arranged Dub in all its glory. The electric guitars perform a dual duty: the skank with embellishment to give that offbeat, Roots vibe but also a haunting accompanying line to the melody; heavily dampened but still with a hint of tininess; the occasional, intricate use of decay, and also the switching between high-and-low-pass filters. Meanwhile the bass generally sticks to a rhythmically repetitive four beat riff. But its notation changes dependent on the musical context, often working from the root of the chord, down to the fifth and then up again.

The guitars and the bass (both performed by Ize Redd) drive the track forward. Then, the drums are on a thoroughly embellished one drop. The focus is led by the upper register instruments: hi-hat, cymbals and snare, with the kick taking a back seat. The former three, while doing a basic repeated triple time roll, also break out into riffs at times. This adds momentum to the track, and the whole arrangement of the three core instruments gives the illusion that Who Start The War is at double the BPM than it actually is.

This urgency is then taken further by the horns. Almost wailing in their forza timbre, and crying in their musical arrangement, Dennis Cross makes them flit in and out, offering a response to Bee’s call. Also, just out of earshot Cross’s keys (a multitalented musician if ever there was one) riff some funky runs and chord sequences, at times also doing a bubble rhythm. He also drops a synth organ on occasion, where a high pass filter has maxed-out the grittiness to make it sound almost like an electric guitar. And the inclusion of djembe from Tafari just add to this brooding, almost nerve-wracking feel.

And Bee’s performance just tops this classy affair off. It’s pure Dub – chanty, yet with elements of straight vocal as well. He has an intuitive ability to phrase and rhythmically align his performance with the most important aspects of the lyrical content. It has the air of being a one-take record as he hammers home the message that, whether ‘we’ want war or not, the decisions of those in power always override ours. Who starts the war? Certainly not 99% of us.

The release also features a Dub version, which would work excellently as a riddim in its own right.