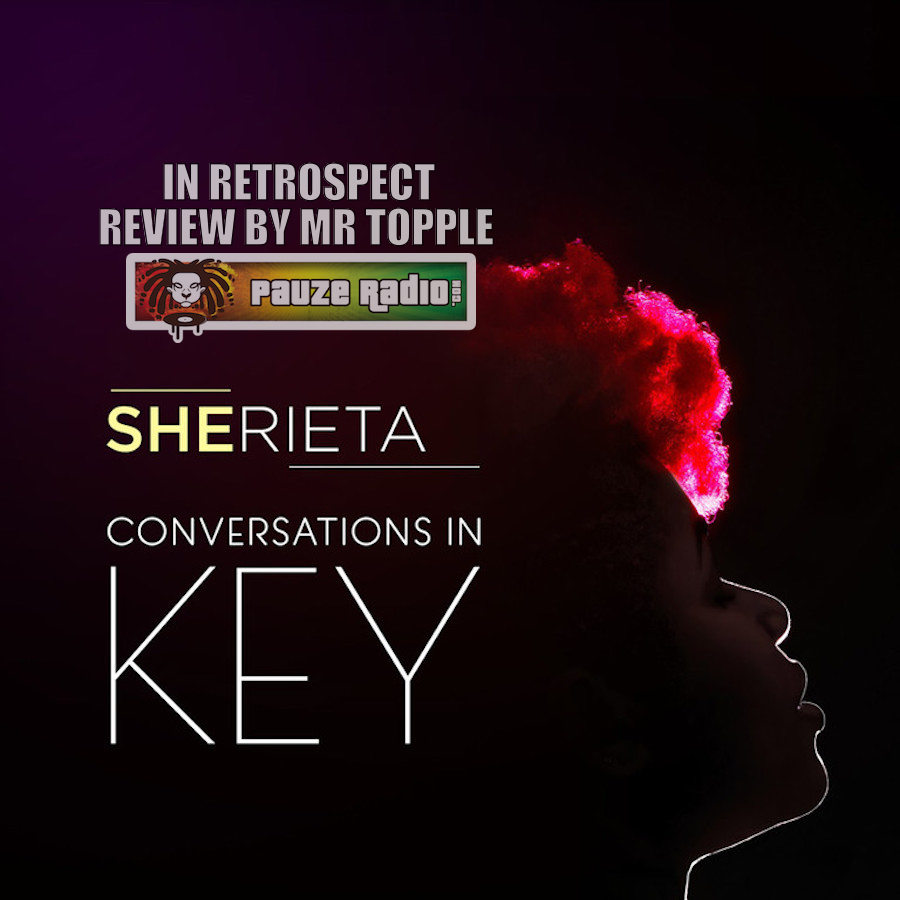 It’s been just over a year since one of the most well-known, respected and prolific backing vocalists in the Reggae scene finally released her own debut EP. And in doing so, Sherieta showed she has a star quality all of her own – giving us one of the best records of 2019 in the process.

Sherieta Conversations In Key, released via Ghetto Youths International, sees Sherieta co-write and co-produce the entire project with Sean Diedrick. The pair have historically worked together as part of Damian Marley’s band. So, to say that the EP is impressive would be an understatement. As it’s inventive, precisely tailored to Sherieta’s artistic talents and utterly engaging.

It opens with Don’t Fail Me Now – and it’s a clever move by Sherieta and Diedrick to start the EP with this track. It’s an authentic, stripped-back RnB ballad: haunting in its unfussy composition yet filled with conviction and soul. The melody is uncomplicated yet powerful and infinitely memorable. Diedrick’s piano line is classic in its arrangement: the bass clef working around chords which drive the progressions, while the treble uses combinations of chords and melodic runs whose intonation increases as the track progresses. It’s beautifully performed, full of appropriately placed crescendo and decrescendo and use of staccato and legato, which is sympathetically placed to align with Sherieta’s vocal – which itself is undoubtedly the centre piece of Don’t Fail Me Now.

I noted that opening the EP with this track is a clever move. That’s because it displays both her technical and performance ability outstandingly.

Sherieta perfectly pitches her vocal, here – delivering it with the aplomb and stylistic attributes of greats like Gladys Knight and Ella Fitzgerald. What’s so wonderful about her performance is the restraint witnessed throughout. Sherieta avoids any over-embellishment; that is, not delivering unnecessarily complex vocal runs or technical wizardry. She knows that here, less is more. So, she makes superb use of her instrument; filling Don’t Fail Me Now with delicate yet effective use of crescendo and decrescendo and glorious examples of seamlessly flipping between her chest and her head voice (note the alteration on words like “ask”, where the vowel sound remains the same but the vocal technique is altered). Her vibrato is controlled, but not overbearing – and explicitly missing at points to not only demonstrate the quality of her voice, but also emphasise the lyrics. Sherieta’s intonation rises, falls and then rises again as the track reaches its climax – and her direct enunciation hammers home the sentiment of the song. This measured performance is the mark of a genius artist – and for me, Sherieta’s vocal across Don’t Fail Me Now was one of the standout performances of 2019:

Next, and the EP, Sherieta Conversations In Key, moves into something distinctly Funky Soul with the track Conversation. Moving forwards and to the side of its predecessor, the arrangement is intricate and glossy. It centres around a driving rhythm section and some gloriously arranged horns. The former is ostensibly Funky Soul, with its wandering, syncopated bass line strutting across the track. An electric organ riffs and runs around, while the drums drive the incessant beat – with the kick doing most of the heavy lifting. Keys do funky runs and guitars skank then riff, too – with a more Bluesy timbre (the bass on the amp being up), to create something rich and rounded. But it’s the horns which are truly impressive – having a metaphorical life of their own. At times, they respond to Sherieta’s calls, working in harmonies. But at others the run a literal countermelody to hers. And at others they stab in and out on sharply tongued, staccato punches. But Sherieta then flips the genre up with a superb singjay, displaying her ability to spit tightly enunciated lyrics across fairly complex rhythmic patterns – while maintaining a funky wind. Very nicely done, overall:

One of Reggae’s other powerful background and solo vocalists, Chevaughn, joins Sherieta on the love song Can We Stay (a wonderful narrative about the pensiveness that exists for some before marriage). Once again, the genre is flipped – here into something Folk Rock-Soul. The guitars drive the momentum and feel of the track. An acoustic one lilts gently across heavily elongated arpeggio chords on Sherieta’s verse, before closing them across dotted rhythms on the chorus and the rest of the track – building in their level of dynamic. Its electric cousin is scintillating. It’s played in the style of something rather Surf Rock: heavy on the mid and treble amp and plucked nearer the bridge, to create a slightly rasping, whining sound. Variations on chords and runs feature, full of emotive bending, too. A bass performs an unfussy arrangement, working in line with the chord progressions to become their driver. And that’s essentially it – a paired back Folk Rock construction. But as with much of Conversations in Key, it’s all that’s needed. Because it’s the talent and professionalism of both Chevaughn and Sherieta that also stands out – bringing the Soul with them.

Vocally, they’re both sublime, with him giving a controlled yet heavily embellished performance, showing his ability across a more Soul-led style. However, it’s when they come together that the magic truly happens. Because Chevaughn and Sherieta’s dueted harmonisation is a thing of beauty – matching each other note-for-note (but melodically thirds apart), with the exact same lengths in play – for example, both finishing their bridged breve-to-semibreves at exactly the same time. They pair their use of dynamics perfectly – and Can We Stay serves not only as a testament of their vocal and interpretative talents, but also the sheer quality they both possess as professional artists. Utterly brilliant:

Next, and Sometimes moves Sherieta Conversations in Key back to RnB ballad territory – once more with a stripped-back, delicate finish that allows Sherieta’s vocal and lyrical content to shine. Diedrick again delivers a sensitive piano performance, here with more of a focus on the mid-to-upper treble clef and rhythmic syncopation across it than in Don’t Fail Me Now. There’s also gorgeous use of several synths, including variations on an electric organ and some well-placed, staccato strings. It’s also the unexpected yet well-placed chord progressions and key changes which lift Sometimes to higher plains. Of particular note is the shift from the B major key to its G sharp minor sixth, then back to a major – which serves to aurally surprise you, and also give the track a feeling of a building sea change, which is enhanced by the slow introduction of background vocals and a shift by Diedrick’s piano into the lower part of the treble clef.

But again, this is Sherieta’s show – with the focus here on the light and shade. She builds across the entire track, from a whispering, delicate opening which gradually increases in dynamics, melodic complexity and rhythmic arrangement to a fully-blown, unapologetic but resilient finale, reverberating with vulnerable yet strong passion – encapsulating the contradictions detailed in the song but the acceptance that it’s OK to be like that. It’s moving, resonant and wholly compelling. Wonderful.

Woman2Woman features another superb vocalist who deserves much attention – Racquel Jones. We’re moved into something that has the air of a 90s RnB track – but with delicious attention to detail to bring it bang up-to-date. The drums have elements of that Two Step sound made prominent by the likes of Timbaland and Rodney ‘Darkchild’ Jerkins – with the focus on the two and four by the snare’s rim clicks, the rapid, rhythmic syncopation in between from the hi-hats and the eventual inclusion of a resonating kick. But Diedrick and Sherieta have brought the sound into 2020, with the inclusion of some distinctly Trap buzz rolls on the hi-hats. Meanwhile, the bass is rich and resonant – with beautiful, imposing glissandos at points, giving that 90s RnB feel credibility. Strumming acoustic guitars, some well-placed strings, a whispering electric organ and a haunting, reverbed percussive block add subtle layers. And finally, the G-Funk whistle cements the vibe perfectly. The two women are at the peak of both their powers, giving Woman2Woman a throwback feel while maintaining freshness. Superb.

The EP closes with Hey; a moving, compelling and fitting end. It’s a fusion track – having elements of almost Nyabinghi in it, along with RnB and Gospel – with extremely intricate layering and building of the instrumental lines. The Nyabinghi is represented several elements. After a talking drum opener, other pitched and unpitched African drums (djembe, congo or similar) run those authentic, imposing rhythmic patterns – starting on a ‘one-four-one’ arrangement before embellishing this further – as a drum kit also becomes involved. Lilting guitars offer up arpeggio chords to start with, before working across closed, incessant ones. Heavily dampened synth horns run solo semibreves, matched by a synth flute, while a piano line tinkers – often using the main melody’s melodic motif. There’s a wonderful use of engineering on a small part of Sherieta’s voice: a response to the main melody’s call, that’s been increased in pitch and EQ’d to sound almost like a rhaita (a north African mizmar). Diedrick and Sherieta’s use of layering of all these lines, building them in one by one, is extremely impressive.

To add some Gospel flavours, the backing vocals use multiple harmonies and several lines – one accompanying Sherieta’s main melody, the other providing additional support. The bridge is absolutely phenomenal, seeing screeching electric guitars come to the fore and suddenly going full-on Rock-Soul – with the instrumentation building to a crescendo (with stabbing strings suddenly entering), then dropping away almost entirely, before returning to reach a climax. Sherieta’s impassioned vocal about how collectively we can affect change if we only realised the power that is in our hands, is highly moving – and the result of all this is Hey becomes a moving and powerful finale to the EP, perfectly encapsulating the record’s various messages.

Sherieta is a star of shining quality. Her and Diedrick clearly have a very good relationship, as the whole EP is perfectly pitched as an introduction to her vocal and performance talents – and has wonderful synergy across it, too. Conversations in Key was not only one of the stand-out debuts of 2019, but also one of the best EPs of the year, too. It is a truly breathtaking showcase of an artist who has consistently delivered in the background, paying her dues, now coming into her own. The First Lady of Ghetto Youths finally arrived. Absolutely stunning – and now, we await the full album with baited breath.