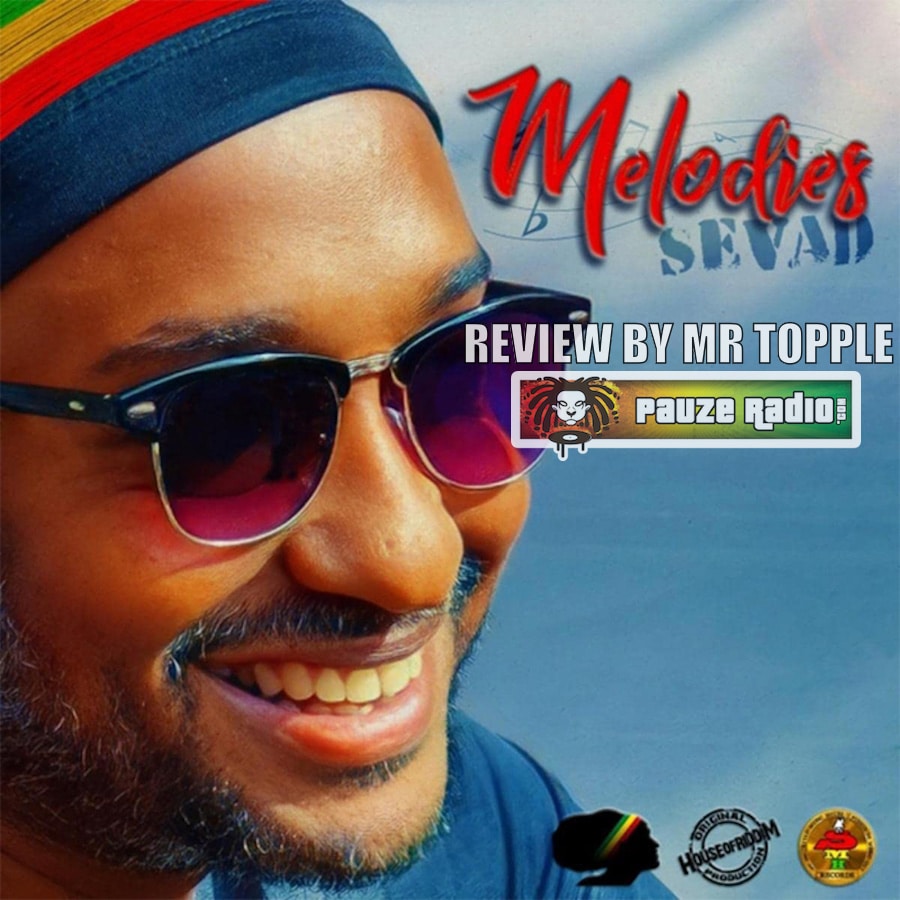 German-based Sevad may have now cemented himself as an established musical artist. Because his latest EP sees him join forces with House of Riddim – and the end result is a masterstroke.

Melodies, released via Sevad Music House Group, is a melting pot of genres – swerving between Roots, Lover’s Rock, AfroDancehall-RnB and Alt RnB. All the compositions came in their original format from House of Riddim. Then, the outfit’s Sam Gilly and Sevad reworked and refined them into the five tracks on Melodies. Gilly did the pre-mix on the riddims themselves to perfect the sound – with his usual flair for quality. The excellent final mixing and mastering were all Sevad’s work – and his backing vocals are well constructed and executed. Overall, this means the EP is rich and attractive – giving something for every listener.

The lead single, Out Of Babylon, is gorgeous. Almost Zion I Kings in the style of composition and arrangement, it’s a rich, Soul-infused affair filled with beautiful attention to detail. It’s Soul-influenced, forthright opening quickly gives way as the track settles into its Roots sensibilities. Keys run a fairly smooth bubble rhythm in the mid-range of their register. They occasionally break out into riffs at the end of some phrases. Meanwhile, the rich and resonant bass is on a one-drop rhythm which works around a running melody. Drums avoid the one-drop, though, as the kick hits the downbeats, snares focus on the two and four and hi-hats fill in the space in between – with some pointed additional syncopation at points. One guitar line skanks and overall, the rudimentary Roots elements are well executed.

But this is House of Riddim and Sevad – so, as with the rest of the EP, it’s the attention to detail which really stands out. A second guitar line runs its own countermelody as well as riffs, with a raw, rasping sound with plenty of delay and tremolo – bringing something evocative to Out Of Babylon. There’s a gorgeous electric organ which runs rapid arpeggio chords at the end of each bar on the chorus – creating a magical feeling. The increase in syncopation across the instrumentation at the end of each chorus is well-placed, building momentum – which is then pared-back by pointed breaks during the verses. And the complex, Soul-influenced chord arrangements, with the striking sea-change in the bridge (note the fantastic closing two bars) are a thing of beauty. Then, Sevad has not only constructed a wonderful main melody, but also delivered an evocative performance, too. He brings a wealth of emotion to his lyrics about how ‘love is the only way out of Babylon’. He makes good use of dynamic light and shade, changes his embouchure for added effect and has the interpretation of a Soul singer here. Overall, Out Of Babylon is a striking, affecting and moving piece of work – the quality being top-class. Perfection.

Next, and Melodies moves into summery Lover’s Rock territory with Calling Me. Here, the instrumentation has been stripped-back to something unfussy compared to Out Of Babylon. Keys run a choppier bubble rhythm, higher up the treble clef to give a lighter sound – with nice riffs at points. The bass has a drop-beat rhythm, which here hits the one but instead misses the two – being more prominent as well. Guitars do skanks, doubling these up at points to create a feel of the Caribbean. A second guitar line whines in a very airy manner with a warmed tone, too. Drums see the hi-hats being more syncopated with a more prominent kick.

Moreover, here the attention is on the arrangement and engineering. For the former, there are pleasing breaks throughout which bring real light and shade to proceedings. The guitars are extremely well-arranged, giving off tropical vibes throughout. The chord progressions are simple but effective, creating a tender and loving tone. Then, the engineering has been cleverly done to make the focus on the bass and guitars while making sure the other instrumentation isn’t lost. Sevad then delivers a warm and longing performance, crooning across his lustful lyrics with the slightest touch of gravel in his voice. His attention to detail in terms of note length is excellent – bring ebb and flow to his performance. Quality all round.

Melodies then switches gear completely – heading straight into smooth AfroDancehall-RnB territory with I’m Sorry. That signature, broken Dancehall clave beat is there (the ‘oneeeeee-twooo-and-[three]-and-fourrr’) but instead of being made heavy, it’s light-touch – played out across the kick as well as snaps. The bass, which is more 808 than electric, doubles-up the rhythm across a straightforward melody. Nodding to Trap, hi-hats flutter around doing slowed-down buzz rolls. An acoustic guitar lilts arpeggio chords throughout while keys tinker just out of earshot – completing the understated arrangement.

Once more, the engineering is highly effective. The sound has been moulded into something ethereal and almost Ambient RnB. There’s a lot of reverb; use of a low-pass filter across certain instrumentation and some well-placed synth strings which glide almost in another room, creating a washing feeling. Sevad’s vocal has also been well-produced, with a lot of harmonic layering across his register to create something almost choral and again plenty of reverb. Sevad has once more created a melody that fits perfectly with House of Riddim’s composition – and his performance on this occasion is pared-back entirely to almost a whisper at points, before soaring melodic and dynamic heights with ease. He has filled this performance with emotion too, in terms of his heartfelt interpretation. All this combined means I’m Sorry is an extremely fresh, modern and compelling piece of AfroDancehall-RnB – or perhaps better described as Neo Soul.

Love sees Melodies go back to Lover’s Rock, but in a Soul-focused way. All the Reggae devices are still in play: keys on a bubble rhythm, one guitar skanking and drums finally settling in on a proper one drop. Here, the engineering is rich and resonant, with nice elevation of the guitar lines. The arrangement is fluid and interesting, with good waxing and waning of the layers of instrumentation. Sevad has constructed a pleasing main melody, too, which complements the music perfectly.

Once more, and the additional touches impress. The chord progressions are almost Doo-Wop/Rock n Roll as they use that signature major root to minor 3rd arrangement to extremely good effect. This is then compounded by the wah-wah’d and bending electric guitars, a meandering clavichord and Sevad’s call and response backing vocals. The bridge, where Sevad and the electric guitar play-off against each other, is well executed – and the inclusion of a heavily vibrato’d Hammond-sounding organ finishes off this 50s/60s-influenced Lover’s Rock throwback perfectly. Sevad then doubles-down on the sound, using vocal glissandos, drawn out notation across and some deft enunciation. Joyous.

Melodies closes with My Melody, effectively the title track. Here, House of Riddim and Sevad have switched things up again – with a pure Alt RnB cut. There are various influences at play here – most notably Trap. The swooping, slightly distorted 808 is directly from the genre, bringing a brooding and edgy vibe with it. Hi-hats at times run spread-out buzz rolls, honing in on this modern sound. And that hard, abrasive snare is stark and shill – while the kick is punchy but sparingly used.

Then, RnB is brought in. The acoustic guitar lines, of which there are two, are very well-arranged. One runs around a combination of arpeggio chords and a lilting melodic line, while the other does that plus intermittent riffs – both out of separate inputs. And here, Sevad has constructed a perfect melody for the brooding, edgy sound – running around his upper register extremely well. He flips between his tenor and falsetto voices; uses staccato note lengths to hone-in on the Trap undertones and switches between a laid-back and urgent delivery, varying the dynamics accordingly. Overall, My Melody is a very strong closing – and is the standout track along with Out Of Babylon.

Overall, Melodies is a powerful and engaging piece of work from Sevad and House of Riddim. It stands in contrast to the former’s earlier work, due to the focus being less on the conscious and more on the emotive. But that’s of no concern, because what the team has constructed is a highly accomplished potted look at Sevad’s potential as an artist – and it is a complete success all round. One of the stand-out EP’s of 2022. For more information, check out Sevads brand new website here.

Find out more about Sevad here.