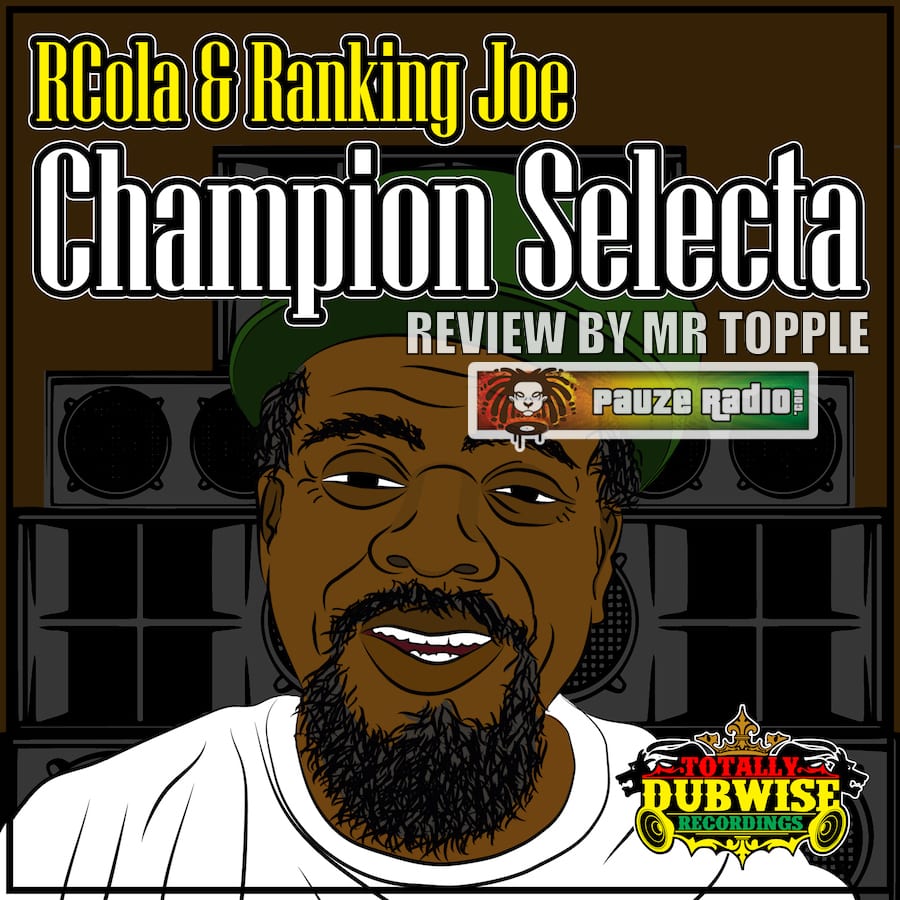 Established UK outfit Totally Dubwise are back with two fresh Jungle cuts – perfect for festival season, but also perfect in their own right. Because the label has teamed up with two legendary names for the release.

Champion Selector/Chant Down will be released by Totally Dubwise Recordings on Friday 15 of July. It sees the label team up with Montreal-based RCola and the “legendary lyrical sound killer” Ranking Joe. As always with the label, the quality of the production and engineering is top-notch – particularly the attention to detail on the Jungle musical devices which stand out from the Reggae staples.

Champion Selector is classic in its Jungle arrangement. It opens with that signature Reggae sound: keys on a bubble rhythm, a pick guitar lilting a delicate melody and all with a decent level of reverb. Quickly, though, this gives way for the Jungle elements. The snare is on continuous offbeat kicks, while hi-hats frantically spin in the spaces in between and the kick runs dotted note riffs. The bass is not overly played, though – taking a meandering path with a drop beat melody (in its Reggae form) – so in this instance, technically half-time. The keys’ still run their bubble rhythm, but now with an additional refrain in the bass clef (left hand). Then, at times the guitar comes back in with its picked melody and horns enter proceedings with a well-executed counter melody laced with crescendo and decrescendo.

RCola has employed decent breaks at points, adding to the authentic sound. The engineering is also very good – here, not putting too much emphasis on the bass, instead focusing on the kick and snare. This means the Jungle flavours are not too heavy, which is a nice touch – matching the major key the overall composition is in. Ranking Joe is on point, too. At times he works his melody around the minor version of Champion Selector’s major key, giving the track a real Old Skool vibe. His vocal is strong and forthright. Joe delivers extremely rapid-fire MCing with ease as well as those signature ad libs – and overall, Champion Selector is a quality track with decent Old Skool vibes.

Then, Chant Down delivers something slightly different – a reimagining of the Sylford Walker classic. It opens with some wonderfully ominous horns running a lamenting refrain and that picked reggae guitar again before it quickly settles into Jungle. Compared to Champion Selector, here the overall feeling is more brooding and unsettling.

The Jungle and Reggae rudimental elements are there: frantic drums, a wandering bass, the bubble rhythm and at times a skanking guitar. But then there are additional elements which really elevate the track. There’s more focus on cymbals at points, which play into the horns’ refrain. The breaks are more pointed with elements of Dub thrown in in terms of reverb use. On top of all this is RCola’s production, which is far more involved than Champion Selector. Ranking Joe’s vocal at points has been chipmunked; the horns have pitch bending and varying decay laced across them at times; the reverb is heavy; other room and telephone techniques are added and this all makes for a very Dub-heavy experience. Ranking Joe is again, on point – but here keeping his vocal unfussy, concentrating more on the melody and lyrical content as opposed to MCing tricks. The end result is a very strong offering which stands in contrast to Champion Selector.

Overall, Totally Dubwise have released another storming set of Jungle tracks. RCola has produced two, very different but infinitely listenable tracks. Joe’s performances are strong and the combination of Champion Selector and Chant Down is excellent. More lovely works.