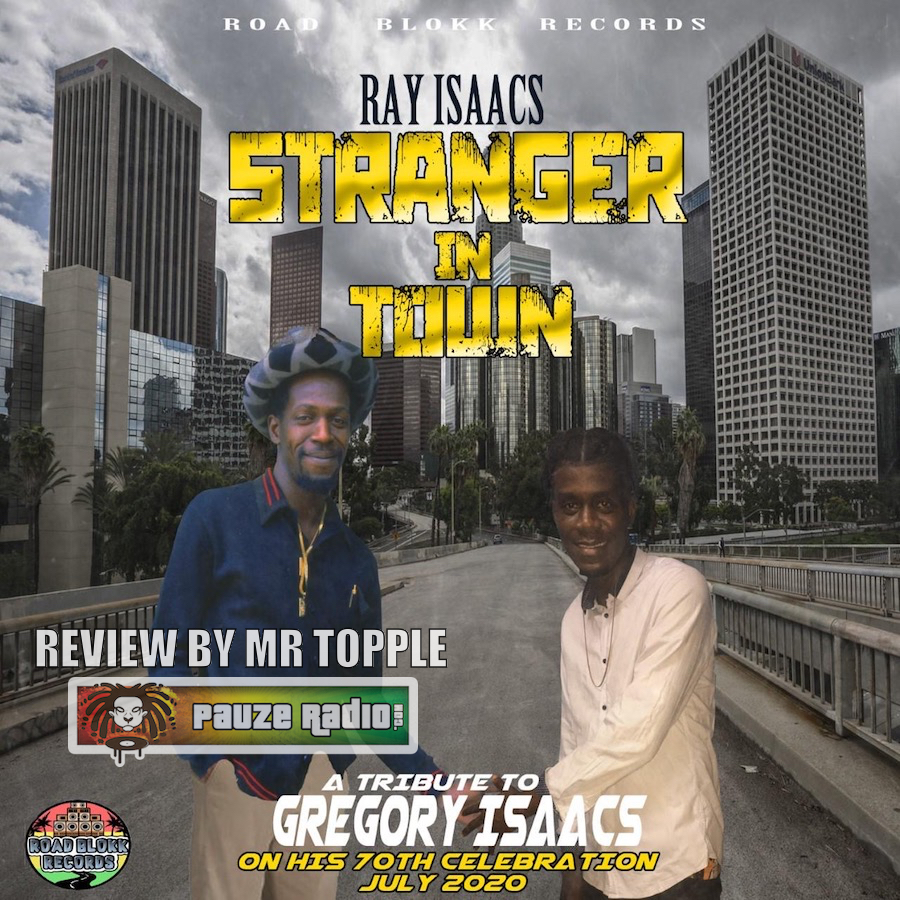 Hot-on-the-heels of his recent Roots/Funky Soul cut Chemical Warfare, and Ray Isaacs is back with another fresh track. But the song itself isn’t new – as he’s released it as a tribute to his late and legendary uncle Gregory to coincide with what would have been his 70th birthday.

Ray Isaacs Stranger In Town, released via Road Blokk Records, sees Isaacs interpret the track from Gregory’s seminal 1982 album Night Nurse. While the fundamental compositional elements of the music haven’t changed, Road Blokk have played with the instrumentation, added delicate intricacies and modern production techniques which have given the track a new lease of life.

Two noticeable elements remain the same on Stranger In Town 2020. The bass, on its instantly recognisable one drop rhythm, has been kept. Its timbre is also similar to that of Gregory’s original, keeping a warm, rounded tone which adds depth to the track. Drums perform a similar rhythmic arrangement, which was notable on the original as avoiding a traditional one drop, with the kick hitting the first and third beat and the hi-hats doing a dotted rhythm, while the snare accents the ups.

Stranger In Town’s original bubble rhythm, performed by skanking electric guitars, has been passed to the keys on Isaacs and Road Blokk’s version; again, this is actually a more traditional way to arrange things. And overall, the emphasis on guitars has been reduced, making way for some delicious new instruments to come into play.

An electric organ replaces and embellishes the guitars brief, funky chord which features at the end of the fourth bar of certain phrases. It’s a great inclusion and adds some distinct Soul overtones to proceedings. But it’s also a clever move from Road Blokk, as Gregory’s original had nods to the genre in the bending electric guitar riffs – so again, the label has created a respectful tribute and enhancement to the 1982 version.
A clavinet joins Stranger in Town 2020, mimicking the bass’s lick at times and then riffing funkily on its own; another tasty touch of Soul. And some punchy, attitude-laced horns come into the mix, too – on staccato chords, across triple time then offbeat rhythms. Final elements of reverb have been added, to bring in a touch of Dub, and the engineering is more focused than the original, honing in more on the bass than just that bubble rhythm and giving prominence to the additional instrumental lines.

All these new additions serve not only to bring the track respectfully bang-up-to-date, but also to give a perfect platform for the young Isaacs’ voice.

He’s a delightful artist, who’s clearly been greatly influenced by his late uncle. Isaacs’ voice is laid-back to the point of falling over – but this doesn’t mean it’s without purpose, shading or momentum. He gorgeously whines across the track, building up the dynamics from delicately delivered starts of verses to a more forthright bridge, before paring the chorus back somewhat to deliver its message with style. He uses syllable clipping well, to hone in on certain lyrics, and displays assured breath control through, delivering whole phrases without interruption. And that developing signature style, where he morphs certain vowel sounds (‘town’ becomes ‘taown’) is lovely. If there were to be any constructive criticism, it would be that Road Blokk may have taken the arrangement down a couple of semitones into a slightly lower key – as Isaacs is at the very top-end of his vocal range at points, and it is occasionally noticeable that he is pushing his limits; that, or maybe we need to hear his falsetto voice brought into play.

But what Isaacs has also picked up on, and moved forward well, is Gregory’s original lyrical interpretation: both men perform the track sensually but with an almost apologetic and slightly uncertain tone, nodding to the ‘potential love interest but is she interested?’ nature of the lyrics – but also the political commentary contained in them, about a man romantically punching above his social class in life, but confident in doing so.

Isaacs’ and Road Blokk’s Stranger In Town is a delight. Gently yet pointedly enhanced from Gregory’s original, it’s still wholly sympathetic to the musical and lyrical thrust of the 1982 classic. And Isaacs himself delivers in droves, showing he’s developing into a performer worthy of his uncle’s legacy. Quality work, and a perfect gift to mark Gregory’s birthday.