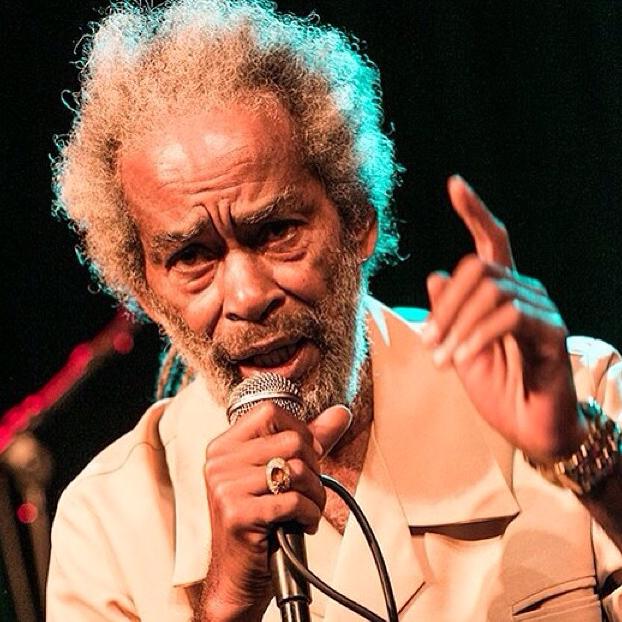 The singer who put the rude in rude boy, Max Romeo was responsible for launching an entirely new sub-genre of reggae, whose overtly suggestive lyrics caused an outcry but took a massive hold of the music scene regardless.

Yet innuendo was the least of the singer’s stylings, previous to the release of his infamous “Wet Dream,” Max Romeo had garnered a string of sweet hits with the vocal trio the Emotions. And once the nocturnal naughtiness faded, the singer established himself as one of the most important figures in the roots scene.

Max Romeo was born Max Smith on November 22, 1947, in St D’Acre, Jamaica. His prospects initially seemed dim; at 14 he left home and found a menial job cleaning out irrigation ditches on a sugar plantation. And there he might have stayed, if he hadn’t won a local talent contest. With all the wide-eyed optimism of youth, the 18-year-old now made his way to Kingston, determined to become a star. Once in the capital, he hooked up with two other hopefuls, Kenneth Knight and Lloyd Shakespeare, and the Emotions were born. Their 1966 debut, “(Buy You) A Rainbow,” produced by Ken Lack, was an immediate hit and over the next two years, the trio amassed an impressive list of successful singles.

In 1968, the singer, now dubbed Max Romeo, was confident enough to launch a solo career. Working with producer Bunny Lee, the young star recorded a number of love ballads and sweet singles, but none made much of an impression on the charts. The singer admitted defeat and returned to the Emotions. Simultaneously, he formed the Hippy Boys, with whom he did some recording (the band eventually evolved into the Upsetters), while also working as a sales rep for Lee Perry. Later that year, Romeo penned new lyrics to the rhythm track of Derrick Morgan’s “Hold You Jack” and handed them over to Lee Perry. Morgan was penciled in for the recording but opted to give it a miss, as did a couple of other vocalists, until finally the exasperated producer bullied Romeo into taking the mike.

The result was “Wet Dream,” an instant smash in Jamaica, although it was far from the first island single to feature suggestive lyrics. It was, however, a bit more obvious than most, so much so that even the British had no difficulty discerning its real meaning. Across the Atlantic, the single was heating up the charts, although not the airwaves. The British censors, not known for their stupidity, gave short shrift to Romeo’s rather lame explanation that the song was actually about a leaky roof and immediately banned it. This had the reverse effect and helped push the single up the chart into the Top Ten.

A bucketload of less-than-furtive follow-up singles now ran rampant across the chart, both from Romeo himself and other equally lasciviously minded artists, with 1970’s A Dream boasting an entire album’s worth of Romeo’s own offerings. In the U.K., this mini-movement took on a life of its own, culminating with the phenomenal success of the homegrown talent Judge Dread and his string of naughty nursery rhyme hits. Back in Jamaica, Romeo attempted to launch his own label (Romax) and sound system in 1970, but unfortunately the venture was a failure. The following year, he hooked back up with Bunny Lee and began recording a clutch of singles based on the producer’s own rocksteady classic rhythms. One of the most intriguing was “Watch This Sound,” which combined a rocksteady backing with the lyrics to the Buffalo Springfield classic “For What It’s Worth.” Branching out, Romeo also cut numerous singles with a number of other producers, including Winston Riley, Sonia Pottinger, and Alvin Ranglin. Many of these releases were culturally themed, as the singer shifted into a more roots-fired mode. Some of the most striking were recorded with the young Niney Holness, including “Beardman Feast,” “The Coming of Jah,” and the apocalyptic “Babylon Burning,” which was co-written by Lee Perry.

A sense of an impending apocalypse was inherent to Rastafarianism as all of Jamaica was caught in its grip in the run-up to the 1972 election. Democracy has always carried a price tag of political violence on the island, but this year was particularly expensive. The conservative JLP party, which had run the country since independence a decade earlier, now for the first time faced serious opposition from the socialist PNP party. The result was an outbreak of violence across the island, as the opposing party supporters squared off on the streets. Both the urban poor and Rastafarians flocked to the PNP banner, while artists, too, made their preferences plain, although it may not seem that way to the uninitiated. Virtually all Old Testament references alluded to politics, with PNP leader Michael Manley personified by biblical heroes (normally “Joshua,” the nickname he was given by supporters), while JLP Prime Minister Harry Shearer was consigned to the role of villain.

Max Romeo, an ardent PNP proponent, released numerous political singles at this time, including “Press Along Joshua,” a message of support for Manley and “Pharaoh,” where he denigrates Shearer. However, it was “Let the Power Fall on I,” an infectious cover of the old Rastafarian spiritual produced by Derrick Morgan that had the greatest impact. PNP chose it as their campaign theme song, while the singer himself joined the campaign trail with numerous other artists, including Bob Marley, performing in rural areas to help drum up support for the party. 1972’s Let the Power Fall album includes many of these fiercely political singles and must have come as quite a shock to any U.K. purchasers who mistakenly thought this was the follow-up to A Dream. Romeo released one final political song later in the year, after the PNP romped to an overwhelming victory. “No Joshua No” is an open musical letter to “my friend Joshua,” wherein the singer gently chides the new prime minister about the continued plight of the poor, the PNP’s most fervid supporters. Manley took the song to heart and proceeded to institute a series of major social programs and land reform.

At this point, the singer bowed out of the political arena and began focusing on more devotional material. 1975’s Revelation Time gathered up many of the deeply dread and gospel-inspired singles Max Romeo recorded with a variety of producers during this period. However, events conspired to pull Romeo back into political consciousness the following year. The oil embargo and resulting world recession had played havoc with Jamaica’s economy and with another election looming, Kingston descended into chaos. The spark was lit by the IMF conference held in the capital that January, shades of the two in Seattle, but the rioting did not stop with the departure of the delegates.

In fact, it was merely the warm-up for a year-long convulsion of violence, as JLP agitators attempted to make the city, and by extension, the island, ungovernable. It was only after the PNP were convincingly re-elected that the violence finally sputtered to an end. During this time, Romeo released a clutch of seminal singles all fired by the Lee Perry’s deep roots production. The conflagrant “Sipple out Deh,” the melancholy “One Step Forward,” the stepper classic “Chase the Devil,” and the revolutionary nursery rhyme “Three Blind Mice” all reverberated across the desolate landscape.

War Ina Babylon It was at this point that Island signed Romeo, and for his U.K. debut, remixed “Sipple,” and released it under the title of “War in a Babylon.” The single had the same impact in Britain as on the island, reverberating across a nation experiencing its own political turmoil. The single would also title Romeo’s new album. War ina Babylon was a masterpiece, the apex of Romeo’s career, as well as one of Perry’s most superlative productions in his own equally illustrious career. Tragically, the pair had a permanent falling out soon after, depriving the world of who knows how many more great records. Romeo’s next album, Reconstruction was self-produced and suffered accordingly. Without Perry, the singer seemed to have lost his bearings, and in 1978, he left Jamaica for the U.S.

Having moved to New York City, things initially went well. Romeo co-wrote the Broadway musical Reggae and starred in it as well, quite a coup, even though the play only had a short run. He was feted by the Rolling Stones and guested on backing vocals on Emotional Rescue’s “Dancing.” Two years later in 1981, Keith Richard co-produced the singer’s Holding Out My Love to You album, with Sly & Robbie laying down the rhythms. The record was a few notches above its predecessors, 1979’s I Love My Music and 1980’s Rondos, but contained nothing coming close to the quality of War ina Babylon. In fact, his best album of the decade was 1984’s Max Romeo Meets Owen Gray at King Tubby’s Studio, a split album of Bunny Lee productions dating back to a decade earlier.

Then the artist simply faded from view. He had no desire to return to a Jamaica, especially considering that the JLP had wrestled back control of the government in late 1980 after a bloody campaign that left almost 700 dead. Romeo recorded a mere two more albums by the end of the decade, both with producer Lloyd Barnes, but both disappeared without a trace.

Many Moods of Max Romeo At the end of the ’80s, a shift in the scene brought roots back into fashion, albeit within a dancehall context. In response, Romeo returned to Jamaica in 1990 and began touring regularly. His profile was heightened by the U.K. release of The Many Moods of Max Romeo, which gathered up a diverse group of tracks cut between 1967 and 1971. It was on a resulting trip to Britain that he met up with Jah Shaka, whose own sound system was responsible for keeping roots alive in the U.K. Having moved into production, Jah Shaka eschewed fashion, with his style remaining defiantly steppers rhythm based. But that was precisely what Romeo was waiting for and the two set to work. Fari Captain of My Ship and Our Rights were both released in 1992 and were fine sets, returning the singer to something nearing his former glory.

Producers Mafia & Fluxy’s own unique style heavily flavoured Max Romeo’s next album, 1999’s Selassie I Forever, and while the pair are electronic-based, the collaboration worked better than many expected. The following year brought another compilation, Pray for Me: The Best of 1967-1973, which nicely complements the earlier Many Moods sets. Notable releases from the new millennium included the conceptual LP Perilous Time (2001), the tribute album Sings Hits of Bob Marley (2006), and Horror Zone (2016), which reunited the singer with Lee “Scratch” Perry.