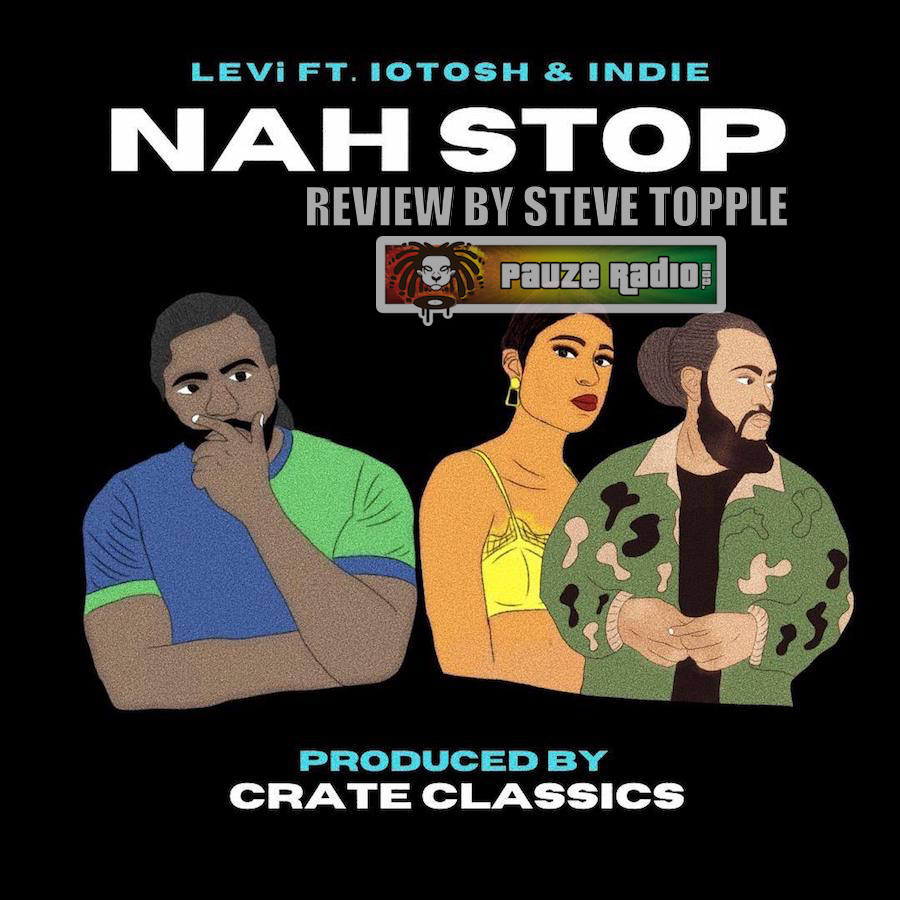 UK-based Crate Classics are at the forefront of progressive, intelligent and classy urban music in the country. And their latest cut is no exception to this – taking the team, along with LEVi ft Iotosh and Indie, into cutting-edge Afrobeats territory.

LEVi ft Iotosh and Indie Nah Stop, released via Crate Classics, is a glossy mix of Afrobeats coupled with some Dancehall tricks. The team – Jamie Rodigan and Aaron Horn – are exceptionally good at taking a vibe, mixing it up and producing a unique and pleasing result (check Bella Blair: Mistake Too). And this is on display across the track.

The driving force of the cut is a rhythm, built across multiple instrumental lines, but driven by the kick. Classics have taken the traditional Dancehall bass clave (‘oneeeeee-twooo-and’ x 2) and used the rhythm in the first half of each bar. Then, the kick hits the third and fourth offbeats, before starting the sequence again.

This is then accentuated by the rest of the arrangement. On the verses, the snare hits just the ‘oneeeeee-twooo’ and then repeats. But on the chorus, it’s flipped as it strikes the ‘twooo-and’, then the third off. A balafon, which is the main melodic focus, has its line arranged around the same rhythm, across two bars – but with the final phrase being a double quaver hit. What sound like heavily compressed and low-passed strings repeat this arrangement on the verses – although given the muffled, almost distant resonance they could as easily be an organ. Overall, this clever use of a Dancehall device, pared back (because it’s not the bass doing the work), means Nah Stop feels lighter and airier – therefore nodding to the genre but with none of the heaviness. Moreover, it gives room for the Afrobeats feel to come alive.

Hi-hats fill the breathing spaces of the snare, with some rapid but brief buzz rolls thrown in. But their use is limited, focused more on the chorus – seemingly to avoid that unsettling Drill/Trap sound that they could fall into. Meanwhile the bass is almost absent, only coming in on the first beat of each bar.

Synth strings return, minus the heavy engineering, on the semiquaver after each upbeat during the chorus, adding more timbre-related smoothness to proceedings but rhythmically enhancing the stuttering, Afrobeats vibe. Wind chimes tinker at points, enhancing the African vibe started by the balafon. And the sum of all these parts is a musically light, winding yet beat driven track, providing a perfect platform for the three artists to work off. Plus, their own unique styles have natural synergy, which leaps out of your headphones.

LEVi is a talented artist. He has a natural flow, which sits well across a neat and well-constructed singjay – using detailed rhythmic patterns which have just the right amount of repetition in their phrasing. His enunciation is crystal clear, and he makes effective use of syllable clipping to hammer home the lyrics. Meanwhile Iotosh, fresh from co-producing the critically acclaimed track Solitude on Lila Iké’s debut EP The ExPerience, delivers a contagious chorus – using that gravelly rap that worked so well on his own cut, Poison. And Indie’s performance showcases her exciting talent well: a laid-back, smooth and winding singjay in which she gives classy attention to detail on the intonation, rising in pitch at the end of phrases to neatly finish her chat off. And her brief dip in vocal, as she spits “and me addicted to de ting jus like a crack fiend”, is delicious.

Nah Stop is another quality release from Crate Classics. Cleverly and delicately orchestrated, it oozes early summer airiness but still has enough of a driving beat to give it a wind. LEVi, Iotosh and Indie are all on-point. And Rodigan and Horn are the production gift that keep on giving – with 2020 looking set to be another storming year from this talented duo. LEVi ft Iotosh & Indie Nah Stop review by Steve Topple (28th May 2020).